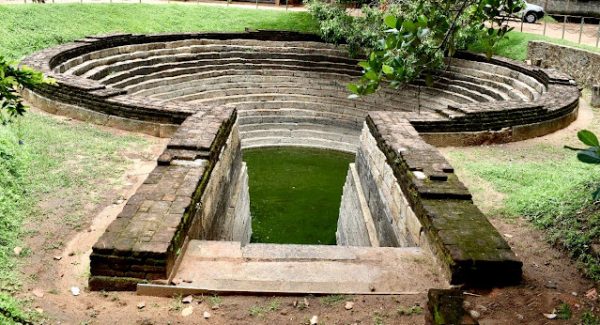 Located in close proximity to *Jethawanaramaya Monastery in Anuradhapura, Yathuru Pokuna (meaning “Key Pond” in English) is a marvelous craftsmanship of our forefathers. There are three ponds known as “Yathuru Pokuna”, two in Jethawanaramaya Monastery Complex and one in *Maha Vihara Complex in close proximity to *Ruwanweliseya and the unique *Buddhist Railing.

The design of “Yathuru Pokuna” (Key Pond) resembles a key. According to scholars, the Ponds have been utilized to obtain water for the rituals of the Bodhigara (Bo tree shrine) of Jethawanaramaya Monastery.

According to *Mahawamsa, these ponds (also known as wells) would have been constructed during the era of King Agghabodhi II of *Anuradhapura Kingdom in the 7th century (608 to 618).

Out of the three ponds, “Yathuru Pokuna number one” at Jethawanaramaya has the best resemblance to a key. The pond gradually enlarges itself from the bottom to the top.

According to scholars, these ponds have been built for water requirements of the monks of the Diyasen Paya Chapter House (Uposathagara) of the Jethawanaramaya Monastery.

Architects and engineers marvel at the ingenious creation of the structure of the ponds, as during this era, there were no modern tools, equipment nor machinery to construct such a marvelous creation. Although, not protected or preserved well, they are in immaculate condition.

Although, situated in close proximity to Jethawanaramaya and popular Buddhist sites in Anuradhapura, Yathuru Pokuna is a location, rarely visited by tourists. 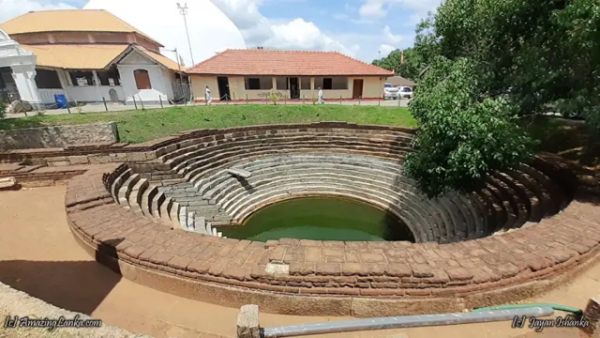