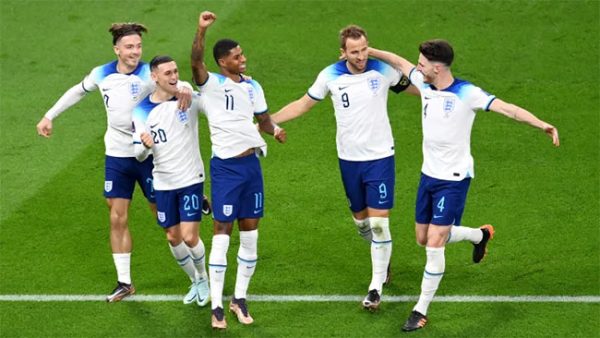 England on Monday thrashed Iran 6-2 to get their 2022 World Cup campaign off to a bright start at the Khalifa International Stadium in Doha, Qatar.

Arsenal winger Bukayo Saka scored for his country in the 43rd and 62nd minutes in his first ever FIFA World Cup tournament.

Gareth Southgate’s youthful side took the lead through a header from Jude Bellingham before Saka and Raheem Sterling scored later in the first half in a dominant display.

Jack Grealish and Marcus Rashford, joined by Saka doubled the score line in the second half to secure all three points for their side.

In the 10 minute extra time given, Iran secured a penalty that helped them get a second goal in the net against the Three Lions.

England had a rather shaky start to the tournament as FIFA had banned their captain Harry Kane from wearing the ‘OneLove’ armband threatening to slam the forward with a yellow card if he went on to the pitch with it.

They opted to back down from pushing for the armband to be worn just hours before their match with Iran kicked-off. They are currently top in Group B.

Cody Gakpo and substitute Davy Klaasen scored late to give the Netherlands a 2-0 victory over Senegal at the World Cup on Monday.

Gakpo rose to glance in a cross by Frenkie de Jong in the 84th minute with the Dutch team’s first effort on target in the Group A game at Al Thumama Stadium.

Klaasen added a second right at the end of eight minutes of stoppage time by slotting in after Edouard Mendy only weakly blocked a shot from Memphis Depay.

The orange-shirted Dutch fans had been subdued until the late strikes as the Senegalese drums and chants were the dominant sound from the stands for much of the game.

But Senegal’s main problem was predictable: Without injured forward Sadio Mane, it couldn’t convert any of its chances.

That was also down to Netherlands goalkeeper Andries Noppert, who made three strong saves to deny the Senegalese in his first game for the national team.