St. Peter’s College has produced coterie of star athletes since the early 1930s, a few who continued the journey and emerged as national champions. Established in 1922 as ‘St. Joseph’s College South’, the school by the Wellawatta Canal was re-branded and named St. Peter’s College in 1927. The name change was documented on April 8, 1927, vide Gazette Notification No.7575. Ninety-nine years later, we pay homage to Rev. Fr. Maurice Le Goc, Rector of St. Joseph’s College for his foresight and vision in establishing this great seat of learning. Rev. Fr. Nicholas Perera was consequently appointed Rector of St. Peter’s College in 1927, and due to his inspired leadership sports was

Athletics commenced in earnest at St. Peter’s after the expansion of the picturesque College grounds, which was opened on 13th September 1930. Subsequently in 1934, St Peter’s college under the captaincy of Shirley de S. Illesinghe and ably coached by Mr. Herbert Wittahachchi won the Tarbat Trophy and Jefferson cups at the Public Schools Athletic Meet.

This write up is aimed at recognizing an extraordinary athlete who had his baptism to track and field at his alma mater – St. Peter’s College in the mid-fifties. Winston W. Tambimuttu stood 6’ 1” in height and was blessed with an awesome athletic physique that was suited to any sport. Tall and lanky, Winston had the necessary physical attributes to go in any direction – be it basketball, cricket, or athletics. He represented college in Basketball, went for practice as a pace bowler who played 2nd eleven cricket with a possibility of securing a place in the first eleven team. But in hindsight, he picked Athletics and came under the tutelage of one of the best in the coaching business in schools at the time – Jackie Van Twest. It must be said that St. Peter’s College was blessed with a coterie of top-notch athletes when Van Twest took over coaching assisted by Terry Louis, another spirited member of the coaching team. Mr. Van Twest’s tenure as Athletics Coach at St. Peter’s College ranged from 1954-1966. 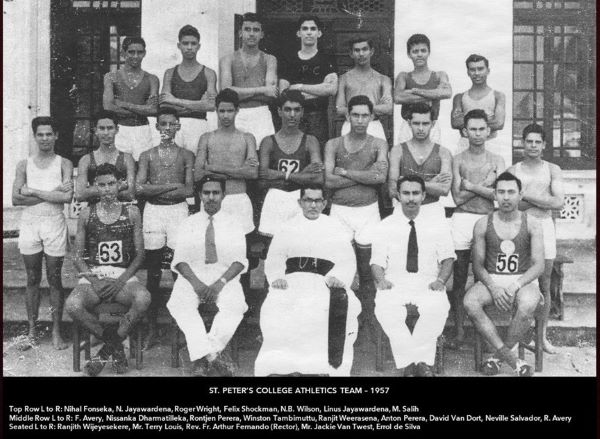 Affixed herein is the SPC Athletics Team of 1957. This was the golden era of resurgence of Peterite athletics. With due respects to Peterite athletic teams in the last six decades, the 1957 Athletic team was perhaps the best team ever produced by St. Peter’s College in its 99-year history – both Seniors & Juniors. This may be a profound statement, but I humbly stand by it. Kudos to Jackie Van Twest and Terry Louis for making this happen. They turned ordinary athletes into extraordinary ones – with a few tipping the scales to clinch the national crown and/or create Ceylon records. 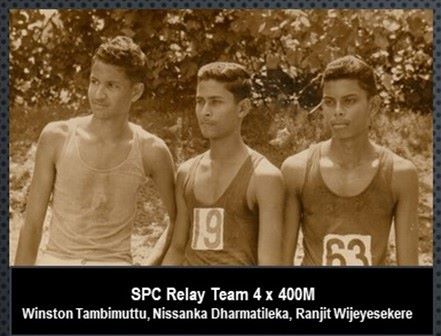 Three athletes in this dynamic team later became ‘National Champs’ in their respective events. Winston Tambimuttu was one – in the 400M Hurdles. The other two were Ranjit Weerasena (Discus) and Ranjit Wijeyesekere (400M). The Juniors’ team was led by versatile sportsman Anton Perera who dominated the ‘throws’, while the Seniors led by Ranjit Wijeyesekere came close to winning the coveted John Tarbat Trophy. A blunder by the officiating referee in the Javelin throw, deprived St. Peter’s of winning the trophy. The Peterite Relay team in the 4 x 400M was dynamic and comprised of Ranjit Wijeyesekere, Winston Tambimuttu, Nissanka Dharmatileka and Neville Salvador. The 4 x 100M Relay team comprising Ranjit Wijeyesekere, Winston Tambimuttu, David Van Dort and a 4th member competed well at Group/Public Schools Meets. Winston Tambimuttu trained hard with a passion for excellence under the expert guidance of Jackie Van Twest. He took his height, stature, and long strides into good effect to become a formidable athlete. His events were 400M, 110M Hurdles, Triple Jump, High Jump and the two relays – 4 x 100M & 4x400M. He was a star and well regarded in athletic circles. After an intense career in Athletics, Basketball and bit of cricket, Winston left school in September 1959.

Six decades may have lapsed since but the name of Winston Tambimuttu deserves star recognition as a trailblazer for St. Peter’s College. Sadly, the history of Peterite Athletics is lost in the woods, and few are aware of the outstanding pursuits of this extraordinary 1957 team that brought great honour and glory to the alma mater.

Winston had a younger brother Stafford Tambimuttu who was also an athlete and member of the SPC Fife & Drum Band. His sister Kerina Tambimuttu continued the family tradition in athletics at Holy Family Convent, Bambalapitiya. Winston’s stepbrother Nihal Gunewardene was a popular sportsman representing college in cricket (1967 – under Tony Opatha), rugger (1966 under Hamzee Hameed and 1967 under Rodney Paternott). Nihal did the triple jump in athletics and qualified for the Group Meet at Police Park. Incidentally, Nihal’s late father Villiers Gunewardene was also a Peterite having secured colours in 4 sports – Rugby, Cricket, Athletics and Soccer, which he captained in the early 30s.

A bit of trivia about the 1957 team members. 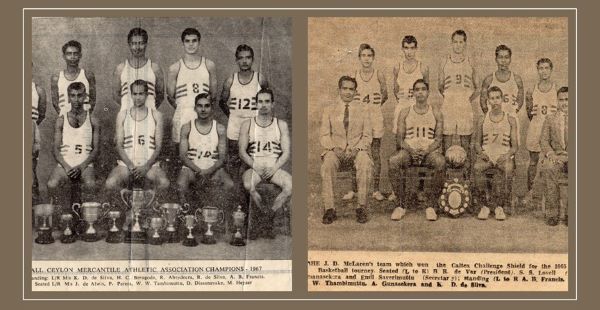 After leaving school, Winston joined J.D. McLaren Co. Ltd., a reputed service provider for many international liner shipping companies frequenting the port of Colombo. He indulged in many sports while at McLarens, but it was Athletics that he shone. Winston took his athletics prowess to another level leading the team to win the All-Ceylon Mercantile Athletic Association Championships in 1967. It must be remembered that the Mercantile Athletic Meet was a popular event that attracted the ‘cream of the crop’ among athletes. Winston created Mercantile and Ceylon records in the 400 meters hurdles. He was also a member of the strong McLarens team that became Mercantile Basketball Champions in 1967, in a team that had two players of national fame – Percy Perera and Sam Lovell. Affixed herein are a few photographs that compliment Winston’s journey in athletics and basketball. Another image shows Winston skimming over the hurdles to create a Ceylon record in the 400M hurdles.

Winston worked at McLarens for 10 years prior to leaving the shores of Ceylon in 1973, to migrate to Melbourne, Australia. He is retired now after working many years as a Senior Executive in the Shipping Industry and lives in Melbourne. Winston enjoys fishing on his boat in retirement.

Sixty-three years ago on March 4, 1958, seven track and field visionaries – Carlton Seneviratne, Jackie Van Twest, Harry Jayawardena, Terry Louis, Lazarus Jayasekera, KLF Wijedasa and schoolboy Vijitha Wijeysekara set out to form the “Ceylonese Track and Field Club” a.k.a CT&FC, with a logo of a gazelle in flight. Athletics is complex and wonderfully varied, but it also embodies passion, hard work and self-improvement. Athletics is education and entertainment, respect for the rules and self-expression. Athletics is also like life itself, with challenges and obstacles, triumphs, and defeats. Many champion athletes have emulated the courage, commitment, and joy inherent in the sport.

The intensive coaching Winston received from Jackie Van Twest prepared him for bigger and better things later in life. Behind every great athlete is a masterful coach that inspires athletes to evolve into the strongest performer they can become. Winston joined the new club (CT&FC) soon after he left college. This was the turning point of his athletic career that led him to break the Ceylon record in the 400M hurdles. His level of endurance and easy style in the shorter hurdles prompted Winston to train for the arduous 400M hurdles event under the watchful eye of Jackie Van Twest and Harry Jayawardena. It must be said that this event was not included at Public Schools level. In 1964, Winston broke the Ceylon Record for the 400M hurdles event. In addition, he was a member of the CT&FC Relay Team that broke the Ceylon record in the 4 x 400M event that included Winston Tambimuttu, E.L. (Leslie) Lokubalasuriya, Senaka Wijayanayake and Nimal Fernando. 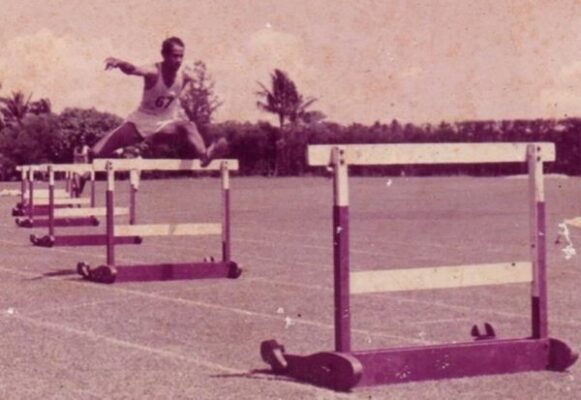 This writer lived at Bambalapitiya Flats during school days and knew Winston, his brothers Stafford and Nihal and only sister Kerina who lived in J Block at the flats. Winston was my idol along with Ranjit Wijeyesekere at school. It is therefore a pleasure to put pen to paper to relive the journey taken by a simple, unassuming, dynamic athlete like Winston Tambimuttu who had the honour of holding on to two Ceylon records at a given period in time in the 400M Hurdles and 4 x 400M Relay. Winston remains a proud Peterite.

From father to son, the legacy goes on. The narrative of Winston Tambimuttu does not end here. It would be remiss if I overlook the outstanding legacy left behind by Winston’s late father, Walter W. Tambimuttu. He was a product of S. Thomas’ College, Mt Lavinia during the time of the great Warden W.A. Stone. Judging by his athletic history given below it is safe to conclude that Walter Tambimuttu would most likely be a contender to be the most outstanding athlete of the 1930s in Ceylon. This honour belonged unreservedly to Ceylon’s Olympian Duncan White in the 1940s.

The achievements of Walter Tambimuttu are listed below:

Some of his other Achievements were:

Walter Tambimuttu set a Long Jump record in July 1938 that stood for 18 years (one of the longest records on the books) until P. Don Victor broke the record in June 1956.