Of all the reasons for dropping out of music school, Eric Harland’s has to be among the weirdest. There he was at the prestigious Manhattan School of Music on a full scholarship, his career as a jazz drummer taking off like a rocket, and the notoriously hard-to-please singing great Betty Carter among those to hire him. But none of that mattered to Harland’s mother back home in Texas. She was thinking long term. Very long term. She had an unconquerable fear for the health of his eternal soul.

“I came from a very religious family,” Harland explains, “and it was really hard for me to enjoy being in college, because my mum was so concerned that I was doing something wrong, or something against God … I was so far away from home, and she was used to having that control over the family, and knowing where everybody was and what everybody was doing.” 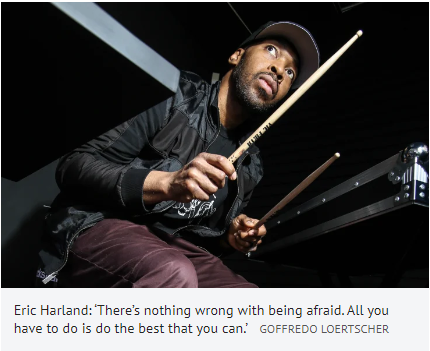 His unorthodox solution involved returning to Houston. “What I decided to do was go to theology school, because in order to be able to have a legitimate conversation with my mum, if I didn’t have the biblical knowledge, there was no way to get her to understand where I was coming from,” he explains. “And going to theology school really taught me compassion. That was the first time I realised there’s something greater than just being an artist, and allowing that part of myself just to be present.”

Harland had played in church as a child, and now for about eight months he returned to that while pursuing these new studies, and found the beauty of some theological concepts changed his approach to music: made it more collegiate and less concerned with what he personally had to say.

He concedes he might well have arrived in the same place by studying philosophy rather than theology: “But without studying something that’s exponentially greater than yourself, I feel like it’s hard to surrender yourself to something that’s going to be greater on the bandstand. It helps you to grow in so many ways.”

Having jumped the hurdle of his mother’s fear, he relaunched his meteoric career – until 9/11 obliterated New York’s jazz scene in 2001. A planned tour with trumpeter Terence Blanchard was cancelled, and Harland and his wife, who had just had a baby four days before the calamity, decided to leave NYC. The first gig he could get when the dust settled was playing in weekend jam sessions at the Blue Note – scant remuneration for trekking in from Pennsylvania.

The world has wheels within wheels, however, and the illustrious saxophonist Charles Lloyd happened to hear one of those jam sessions, and invited Harland to join his quartet. The celebrated players associated with Lloyd’s long history filled Harland with fear and self-doubt, yet how could he say no? “That’s another beautiful thing,” he says. “There’s nothing wrong with being afraid. All you have to do is do the best that you can … I just had to be humble, listen, receive advice and just trust that everything was going to be OK.”

It was, because now Harland is coming up for 20 years with, Lloyd – nearly half his life. When he performed in an un-dampened City Recital Hall with Lloyd’s Greek Project in 2014, his capacity to make the music burn at a whisper shone out. It was a skill he learned from his first teacher at about six – one he believes too few drummers fully assimilate.

“When the room is really lively they don’t really know how to readapt their sound,” he observes. “You have to play softer, but not lose the intensity or the support. You still want the drums to sound like the drums, but not be overbearing, just more accommodating for everything that’s happening. It’s all about giving a unified sound with the band.”

He points to many groups who play the same material in the same way regardless of the room, whereas Lloyd’s band always instantly adapts. “One of the most beautiful things about jazz music is that you can play the same song a million different ways,” he says. “As long as you have a band leader, like Charles, who’s completely open and not really set for the song to sound the exact same way every time, then you can achieve some great musical creations on the fly, because the approach is just a little bit different.”

Each time Harland has been here he’s come with a different venture, and this time he’s joining saxophonist Will Vinson and guitarist Gilad Hekselman in Trio Grande 2.0, which made its debut album with one of Harland’s few drumming peers, Antonio Sanchez. While Harland has recorded with both Hekselman and Vinson on their solo albums (and counts them among his favourite players), he’s never worked with them together before, and is excited by the prospect. “We just hear the same language,” he says. “We’re going to really see what’s possible and honour the music to the best of our ability.”