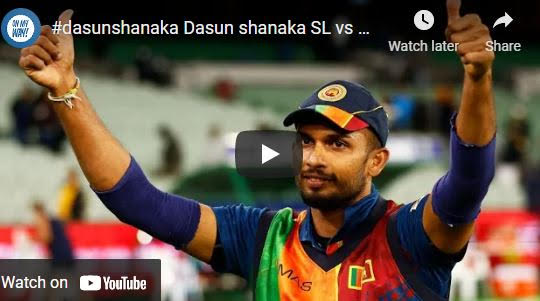 If there was a performance that exemplified the adage “glorious uncertainties of cricket” it was given profound meaning by Sri Lanka skipper Dasun Shanaka who single-handedly steered his country to an unlikely win over Australia at Pallekelle.

The high riding Aussies who had clean swept the Lankans in Colombo to take an unassailable series lead and was on course for a clean sweep of the three game contest, reckoned without Shanaka, who bludgeoned the hitherto feared attack to all parts of Sri Lanka’s Hill country for a 25 ball 54 that will live long in the minds of those who watched his epic knock apart from the shell shocked Aussies.

Marcus Stonis possibly summed up the outcome best by saying “We probably got ahead of ourselves”, not expecting Sri Lanka to chase down what seemed like an insurmountable target at the time.

At 108 for 6 in 16 overs, all seemed lost for the doomed Sri Lankans when Shanaka strode to the wicket intent on remedying the situation. His savage onslaught had the Aussies punch drunk in the end.

If the Aussies perceived their tour was going to be a breeze against a Sri Lankan side struggling at the moment for consistency, this game gave the reason to think otherwise.

With a five game one day series to follow and two Tests in Galle the home team will have enough time to work out the strengths of the tourists and formulate a plan to counter them.

Australia are currently one of the benchmarks of World cricket in all formats, so the Sri Lankans will consider this tour as valuable experience and a means to ascertain their true worth.

The tour has also given the cash strapped country an avenue to raise valuable money that can be utilised to get essential commodities that are sadly lacking.  It was heartening to see Steven Smith and Mitchell Stark doing their bit, encouraging donations to revive a bankrupt economy in the Island nation.

Injuries have hit the Aussies with Stark, lacerated finger, and Mitchell Marsh, calf strain, making way for Josh Inglis and Jye Richardson. But the Aussies have little to be concerned about as their depth runs deep especially with the Australian A team also on tour on Sri Lanka.

Sri Lanka will be a different proposition in the Test series but their concern is in the one day format where their wins have been few and far between.