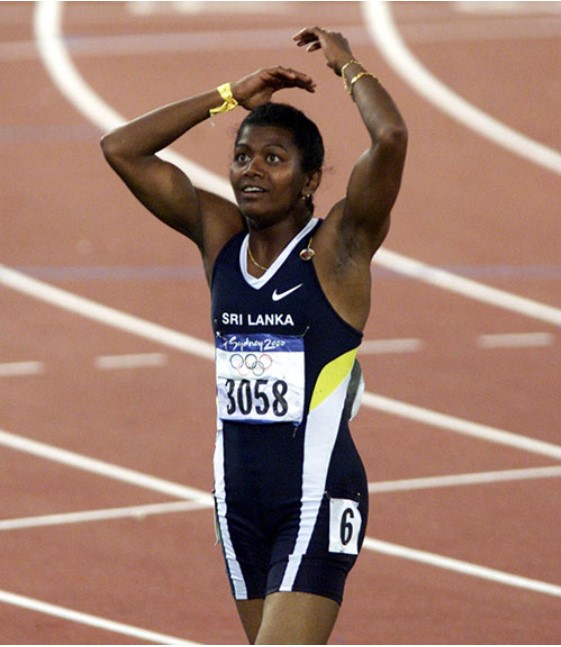 As in certain offices, in banks too there are restricted areas for outsiders and staff members who are not attached to the relevant divisions. The Treasury Department of any bank consists of three different sections; the front office, middle office and back office. The front office is commonly known as the Dealing (Trading) Room, with strict limitations to those present. It can also be used as a television viewing place, with the availability of all channels, both local and foreign.

The day, September 28, 2000, was an exceptional day as a few breathtaking moments were witnessed within our dealing room at HNB, as history was made by a courageous and determined, petite Lankan damsel in a faraway country. That was the day our Athletic Heroin, Susanthika Jayasinghe, competed in the Sydney Olympics in the 200 meters finals. Knowing the enthusiasm and fervour, that other staff members too share, to witness the event live, with the consent of my boss, Senior DGM Treasury, Gamini Karunaratne, I kept the doors of the Dealing Room wide open for others too to watch the event. As the ‘auspicious’ time approached the dealing room started getting packed. Finally, it was not only ‘house full’ but ‘overflowing’.

Maintaining the tradition, the ‘visitors’ were silent except for a slight murmur. Gradually, the murmuring diminished as the time approached. The track was quite visible to all of us. For the women’s 200 meters sprint event, there were eight competitors with Marion Jones of the USA as the hot favourite, and Cathy Freeman of Australia, the two athletes many of us knew.

As the much-anticipated event commenced, there was dead silence for about 20+ seconds and then the uproar of ecstasy erupted, along with tears of joy in all gathered, as our Golden Girl became the bronze medal winner, just a mere 0.01 seconds behind the second-placed Pauline Davis of Bahamas.

As treasury dealers, while at work, we have witnessed all-important local and world events as and when they happened, thanks to the advanced media paraphernalia in dealing rooms of the banks.

Coming back to Olympics, for seven years everything was rosy for Marian Jones (MJ), but when she pleaded guilty to using steroids, she received international opprobrium and was stripped of all five Olympic medals she won in Sydney, Australia. After the belated disqualification of MJ, our heroine Susanthika was adjudged the Olympic silver medallist of the 200 meters event in the 2000 Sydney Olympics, with Pauline Davis as the gold medallist.

So it is after 52 years that Sri Lanka was lucky enough to have won another Olympic medal. Thanks to the sheer determination of our golden girl Susanthika and her numerous supporters, she was able to achieve this spectacular honour, amidst many obstacles. She was the first Asian to have won an Olympic or a world championship medal in a sprint event. The 21st anniversary of her tremendous feat falls on September 28.

Thank you, Madam Susie, for bringing honour to the country, and being an inspiration to the younger generations of budding athletes.