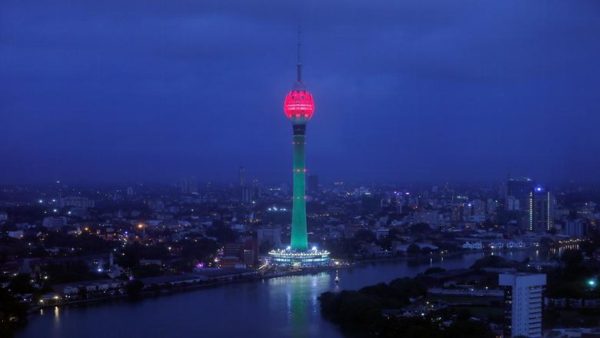 It is also referred to as Colombo Lotus Tower. (Photo Reuters)

Island nation Sri Lanka’s ‘white elephant’ Lotus Tower, financed with Chinese debt, is all set to open this week. It is also referred to as Colombo Lotus Tower. 1,150 feet (350 m) tall, it is located in Colombo-capital and the largest city in the country by population. It has been called a symbolic landmark of Sri Lanka.

From Thursday, Lotus Tower’s observation deck will be open to visitors, said the state-owned Colombo Lotus Tower Management Company. The structure will be used to rent out office and shop space. Reportedly, there will be a revolving restaurant just below the observation deck. It will offer views of the congested capital as well as the Indian Ocean.

1) In South Asia, the tower is touted as the tallest self-supported structure.
2) It is the 11th tallest tower in Asia.
3) Lotus Tower is the 19th tallest tower in the world.
4) It was first proposed to be built in the suburb of Peliyagoda. However, later the Government of Sri Lanka decided to change the location.
5) The tower will be used for communication, observation, and other leisure facilities. 6) Construction is estimated to have costed USD 113 million.
7) Since construction began in 2012 (under former president Mahinda Rajapaksa), it has been plagued by corruption claims.
8) The design of the building is inspired by the Lotus flower.
9) Tourism and antenna leasing, will be the main sources of revenue for the Lotus Tower. The Lotus Tower will function as a radio and TV broadcasting antenna ISDB-T and a proposed DVB-T2 support structure for 50 television services. It will also provide services to 35 FM Radio Stations and 20 telecommunication service providers.
10) It has four entrances. However, two out of the four will be used as VIP entrances. The Lotus Tower’s podium consists of 6 floors, and landscaping is planned in the form of a large water park.

Adding a new experience for the people of Sri Lanka and for the tourists, the operation of the Tallest self-supported structure in South Asia, the Lotus Tower, is planned to commence operations from the 15th of September 2022. #lotustower #colombo #srilanka 🎥 @trio_x_wanderer pic.twitter.com/YnxVxLHkvh