Washington will continue to support Lanka’s fight against Covid-19 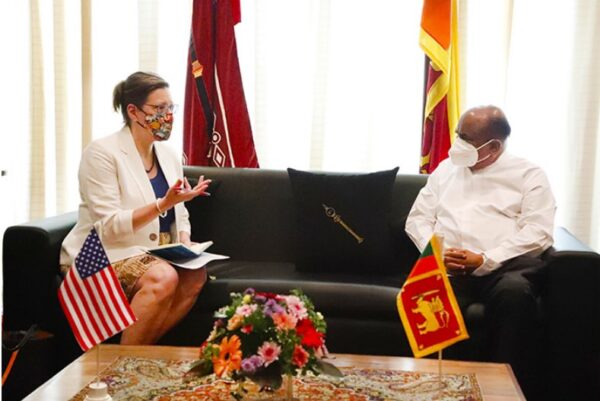 US Ambassador to Sri Lanka Alaina B. Teplitz explaining a point to Speaker Mahinda Yapa Aebywardena during their meeting yesterday.

US Ambassador to Sri Lanka Alaina B. Teplitz yesterday said that the US would continue to support Sri Lanka’s fight against Covid-19 through the COVAX facility.

She made the pledge during a courtesy call on Speaker Mahinda Yapa Abeywardena yesterday, Parliament sources said.

Marcus Carpenter, Deputy Chief of political division and Kushani Rohanadeera, Deputy Secretary-General of Parliament and Chief of Staff were also present at the meeting which was held at the Speaker’s Office in Parliament.

A number of issues of mutual interest were discussed between Sri Lanka and the US, including diplomatic and economic matters. Furthermore, the future intended investments of the United States in Sri Lanka for the future of the energy sector were also discussed, sources said.

The Ambassador also informed the Speaker that the US continues to support the development of Sri Lanka and protect democracy in the face of COVID faced by the whole world.