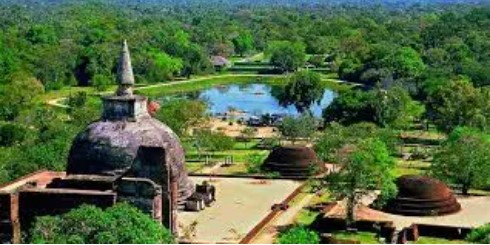 Vinod Moonesinghe, in an original essay bearing the title  “Agricultural nation, a myth?” ……… … now reproduced with a different title and with highlIghting imposed by The Editor, ThuppaHI

“The past is a foreign country; they do things differently there.” — L.P. Hartley, The go-between

Recent shortages of milk powder, wheat flour and even rice have brought into perspective Sri Lanka’s lack of food security. The situation has been exacerbated by growing dependence on imports of wheat – which rose from half a million tonnes in 1980 to nearly 1.5 million tonnes in 2020. This lack of food security has re-kindled an argument about the role of agriculture in Sri Lanka’s economy, which has extended into the realms of historiography.

When former secretary general of UNCTAD Gamini Corea wrote “Sri Lanka has always been predominantly an agricultural economy since ancient times,” he reflected historical orthodoxy. However, a revisionist historical school has emerged, holding that this view of Sri Lanka, as an agricultural country, the granary of the East, reflects a myth. For example, Former Central Bank deputy governor WA Wijewardena says that “A widely-held view by many Sri Lankans is that Sri Lanka was an agriculture-based economy in the past and it should be so even in the future. The first part of this argument is only half-true.”He thinks that in the ancient past, Sri Lanka had an “open economy”, in which trade occupied as important a place as agriculture.

Science Fiction writer Yudhanjaya Wijeratne, similarly, concludes that “the evidence for this conversation is thin to non-existent.” He argues that accounts in medieval chronicles, of the size of the army of Parakramabahu I, and hence of the then population, are highly exaggerated.

These arguments appear to boil down to three main points:

But this does not tell the whole story. Ancient Sri Lankans built 30,000 irrigation tanks, of which fewer than 8,000 remain in operation today,  part of a sophisticated pattern of tank cascade systems – each tank being part of a complex ecosystem, minimising bird and insect damage to crops, and ensuring renewal of soil nutrients and leeching out of salts. Farmers used the fresh soil of beds of silted-up tanks for paddy, constructing replacement tanks upstream. Traditional paddy varieties required less nutrition than modern hybrids, and were sturdier and more resistant to weeds, insects, and disease– so they required no weedicides or pesticides. With such a sophisticated irrigation system, farmers must also have known complex methods of cultivation. For example, traditionally they sowed three seasons annually, compared to two today.

The diet was completely different. We had no papaw, tomato, chilli, potato, or manioc, which all came from the Americas. People flavoured their food with forest products, such as pepper (the original miris), cinnamon, and karapincha – so they did not need to grow it separately. The Portuguese soldier João Ribeiro reported that the villagers did not need to pluck pepper, just waiting for it to fall – making it of the highest quality – as it was so abundant.

Although the European invaders destroyed this system of agriculture, some of it remained extant in the Kandyan kingdom until the 1800s, when British colonial treasurer Anthony Bertolacci reported that the kingdom of Kandy exported rice.

The area under cultivation during the Anuradhapura and Polonnaruwa periods dwarfed what is available today. Centuries of destruction turned millions of acres back to jungle – the Vanni alone contains 650,000 hectares, of which a substantial amount must have been cultivated. To this must be added enormous tracts of land, now under tea and rubber, which once comprised paddy or forest land, taken from the community and granted to planters. Such a large extent could have supported a sizeable population, while leaving a considerable exportable surplus. Parakramabahu I must have required a significant surplus to enable his invasions of Myanmar and South India, and to hold onto Rameswaram for decades against the onslaughts of the mighty Chola empire.

Each of the 30,000 ancient tanks must have been associated with a village, each with an average population of about 300, giving about 9 million for the rural population. With the population of Anuradhapura and other cities, one might get a total of ten million. UNK Rathnayake concludes cautiously, from literary sources (which, he holds, reflect contemporary official statistics), that the population in the Polonnaruwa era may have been greater than today (the Pujavaliya giving 21 million and Rathnayake calculating 50 million from the Damabadeni Asna). Of course, these figures should be treated with care.

Wijeratne says that if this were the case, Sri Lanka would have a comparable population to the Roman Empire (about 60 million). The Ancient city of Rome had a population of a million in 12 km.2 We do not know the population of ancientAnuradhapura, but we do know it had an area of 40 km2, slightly larger than modern Colombo, and dwarfing ancient Rome. Also, Rome depended on highly inefficient slave labour, requiring a much larger population for the same surplus – it survived by importing Egyptian grain, paid for by plunder from foreign expeditions.

Wijeratne suggests that to get to the 1871 census figure of 2.4 million, from 21 million in the reign of Parakramabahu I (1123-1186 CE), would require a ten-fold reduction in population, “a 500-year extinction that should have gone noticed.”

But did it go unnoticed? We know there was a collapse of the Anuradhapura kingdom around 1000 CE, and that following this there was a gradual decline up to 1400. In this period, the centre of population shifted from the Dry Zone to the Wet Zone, with a corresponding shrinkage in population. The 13th century saw the depopulation of the dry zone, as Anuradhapura and Polonnaruwa fell into disrepair.

This slow, 400-year collapse was accompanied by a drastic loss of technology. Jill Juleff discovered many wind-blown blast furnaces dating from the 7th to 11th centuries, producing high-quality iron and steel. This technology appears subsequently to have been lost, and Ananda Coomaraswamy noted regressive methods of steel making in his report on Sabaragamuwa.

Sri Lanka also accepted large immigrant numbers in this period. Entire castes appeared from South India, brought with them various skills, apparently those lost in the local population. For instance, the Salagamas came over from Kerala as weavers. The influence of South Indian masons on the architecture can be seen in temples such as the monastery at Gadaladeniya, near Kandy.

In ancient times, drastic population reduction took place regularly.  Even with an abundance of food, there could be crop failures. According to WI Siriweera, in his History of Sri Lanka: From Earliest Times Up to the Sixteenth Century, famines occurred at 100-200 year intervals, but the only  major one in the 12th century reign of Parakramabahu II of Dambadeniya, caused by drought; followed closely by another in the time of Bhuvenakabahu I. Smallpox ravaged the land at the time of Sirisangabo (reputedly killing half the population) and may have destroyed the army of Prince Sakka in the Pandya country in the 10th century – enabling the victory of Paranataka I Chola.

Thus, population loss, especially a gradual one, may have been unremarkable. Any long-term population decline must have taken place for more than one reason. It has been attributed to a variety of causes, including war, famine, epidemics, malaria and even water salination. The Portuguese chronicler de Queyroz claimed that the abandonment of Anuradhapura took place due to war, smallpox, famine, and the plague.

With a large, exportable food surplus, it seems unlikely that ancient Sri Lanka would not have traded in these commodities. Sri Lanka definitely exported cinnamon and areca nuts. Add gems (especially garnets), pearls, steel, and elephants, and it becomes clear that trade must have been important. However, the question is whether it was as important as made out by the revisionists.

A measure of the importance of trade may be the substantial grants made to Buddhist monasteries. Most monarchs made presents of land, sometimes whole villages to the viharas. For example, according to the Mahavamsa, Vasabha granted 1008 karisa (3000 ha) of land to the Anurarama Vihara, near Mahagama. These reports in the chronicles are generally replicated in the epigraphic records.

On the other hand, the evidence for trade-related grants is very sketchy. One example stands out: the port of Godavaya was an entrepot between Far East and Middle East, as well as the outlet for exports coming down the Walawe River. The Mahavamsa states that Mahallaka Naga built a monastery there. Three inscriptions have been found there, one of which says that “Gamini Abhaya” (Gajaba I) granted the customs duties of the port to the vihara. Another inscription states that Gajaba’s queen, Ahalaya Bathikamithaya, granted six karisa (18 ha) of land to the vihara.

This suggests that the total customs revenues from this important port were equivalent to the production of the land given to a single monastery, the Anurarama Vihara, one of several thousand around the country, which received land grants. It puts the relative importance of overseas trade in context.

Of course, the foregoing does not prove the revisionists wrong, but places their arguments in the perspective of those times, exposing several anachronistic flaws in their assumptions. Further research may be warranted, to explore the extent of trade and estimate the actual population during that epoch.

.. . with his approval of Darwin’s contribution to knowledge