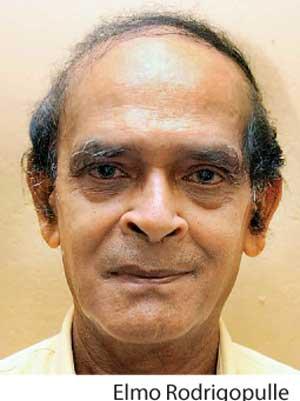 Former St. Benedict’s College, Kotahena cricket captain Elmo Rodrigopulle will go on his last journey today after a distinguished career as a sports journalist spanning over five decades.
Elmo passed away after a brief illness just a day after his 80th birthday on July 19.

He literally died with his boots on after having penned his long-running ‘Sportscope’ column which appeared on July 11 in the Sunday Observer, where he served as Associate Editor (Sports) at the time of his death.The right-arm leg spinner and handy lower order batsman played for Tamil Union and Saracens SC, which he also captained, and gained international honours when he represented the Ceylon Board President’s XI led by Michael Tissera against Hong Kong.

He gained more prominence after he embarked on a career in journalism in 1970 becoming Sports Editor of the now defunct Times of Ceylon and later Daily News for several years. He was renowned for his forthright comments delivering his googlies without fear or favour, being an authority on cricket having played at the highest level with former Sri Lanka wicket-keeper opening batsman Ranjith Fernando being among his teammates at St. Benedict’s. Although he was considered an expert on cricket, he was an all-rounder when it came to other sports as well because of his extensive knowledge and experience on national issues over the years.

A little known fact is that he was one of the first journalists from Sri Lanka to cover the Olympics when he provided coverage of the 1980 Moscow Games. Elmo has been the recipient of numerous state and private awards for his excellence as a sports journalist.

His remains lie at A. F. Raymond Parlour, Colombo, and the funeral will take place at the Madampitiya Cemetery, Colombo 14, today.