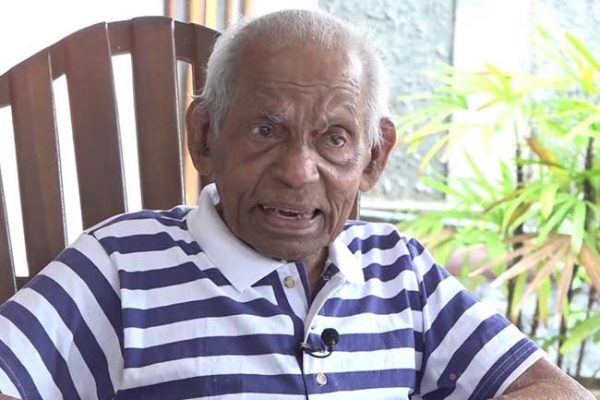 Alfred Perera, a veteran actor and a senior radio announcer, has passed away this afternoon (Nov 20) at the age of 93.

He has served as a senior news reader at the Sri Lanka Broadcasting Corporation (SLBC) for a long period.

Alfred Perera was the founder and also the host of the radio program “Vinoda Samaya”, which was extremely popular in Sri Lanka for several years.

He has further served as an instant language translator in the Parliament of Sri Lanka for a long time, while he was also in charge of the Sinhala section of Radio Veritas in Manila, Philippines.

Maruwa Samaga Wase (1977), Sinhawa Atharin (2015) and Sanda Nega Eddi (1966) are a few of the popular Sri Lankan movies he had starred in. He has also starred in a number of teledramas.

The final rites of late Mr. Alfred Perera are scheduled to be performed at the Dalugama Church Cemetery at 3.30 p.m., on Tuesday (Nov 22).

His remains currently lie in state at a private funeral parlor in Makola.