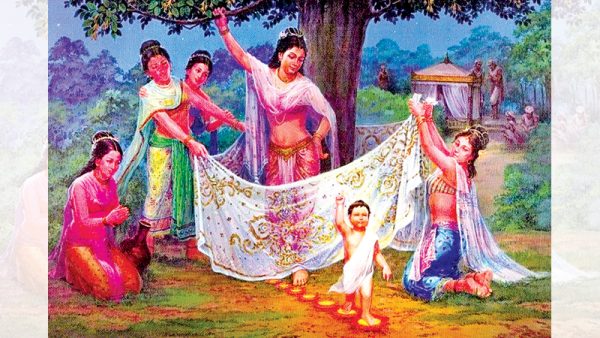 Having lived in the Tusitha heaven the Bodhisattva was reborn among the humans, receiving the name ‘Siddhartha’, which means ‘One who renders a noble service to the world’. His mother was Queen Mahamaya and His father was King Suddhodana. Prince Siddhartha’s Birth, Enlightenment and Relinquishment or Maha Parinirvana (the Great Demise) took place on a Vesak Full Moon Day. These three memorable events that happened to take place in the life of this great personality are known as ‘the three hallowed events’ in His life.

The Bodhisattva’s appearance in the human plane took place attributing to the fulfilment of five conditions namely time, country, and continent, race and mother. Soon after His birth, He is said to have stepped over the petals of seven lotus flowers. History records that thereupon the little prince had exclaimed,

“I am the chief in the world, There is no equal to me, I am Supreme; this is my last birth; No rebirth for me.”

Rejoicing over this occasion King Suddhodana summoned several erudite scholars to the palace. They were asked to predict the future of the little prince. Most of them held the opinion that the prince would either become ‘a great monarch’ and rule over the country or renounce worldly life and become ‘a Buddha’. However, the youngest scholar called ‘Kondanna’ announced enthusiastically that the prince would certainly become ‘a Buddha’ and it happened just as he predicted.

It is said that through a very long period of countless aeons of time, the Bodhisattva, the Buddha-to-be had earnestly cultivated ‘Paramis’ (Perfections) in order to attain supreme enlightenment and become ‘Samma Sambuddha’.

Since childhood Prince Siddhartha showed compassion and kindness to all living beings. He was clever in mastering various kinds of arts and skills too. At the age of sixteen, Prince Siddhartha got married to a princess called Yasodara. In course of time, she gave birth to a little prince and he was given the name ‘Rahula’.

One day, the sight of four signs made Prince Siddhartha feel disillusioned about worldly life. They were an old man, a sick person, a corpse and a mendicant. Consequently, at the age of twenty-nine, Prince Siddhartha’s ‘Great Renunciation’ took place on an Asela Full Moon Day. During His quest for truth, He came across the religious teachers Alara Kalama and Uddakaramaputta. The hermit ‘Siddhartha’ spent a period of about six long years in the forest practising ‘self-mortification’ but to no avail.

At the age of thirty-five, ‘Gautama Siddhartha’ realized Supreme Enlightenment, the ultimate truth and highest bliss, and became a Buddha through His own genuine efforts. In His first sermon, the Buddha instructed the first five disciples Kondanna, Vappa, Bhaddiya, Mahanama and Assaji that one should avoid the two extremes ‘Self-mortification’ and ‘Self-indulgence’ which yield more Dukkha, are ignoble and futile, but adhere to the Middle Path, which is also known as the Noble Eight-fold Path if one is to liberate oneself from all kinds of Dukkha and bondages.

Holding on to things that are pleasing and enticing is the dominant nature of the human mind. But, however pleasing and attractive these physical phenomena may be, they are impermanent, that is subject to change and not long lasting. This is the ultimate or absolute truth. The ordinary worldly being (puthujjana) holds on to these fleeting objects due to ‘craving’ or ‘desire’. Thus a puthujjana may try to satisfy his/her senses by grasping or holding on; but when these physical phenomena change, he/ she may fail to satisfy or please them quite contradictory to one’s expectations. This is Dukkha: the unsatisfactory nature of life.

The end of Dukkha is gaining insight into the true nature of things through the practice of generosity, non-clinging, letting go and non-attachment.

The Buddha is also known as the peerless physician (bhisakkho), the supreme surgeon (sallakattoanuttaro). He indeed is an unrivalled healer.

The Buddha’s method of exposition of the Four Noble Truths is comparable to that of a physician. As a physician, He first diagnosed the illness, next He discovered the cause or the arising of the illness, and then He considered its removal, and lastly applied the remedy.

The Truth the Blessed One realized and discovered thus through His own endeavours, is deep and hard to perceive, but yet simple. The Gautama Buddha expounded the Dhamma to people from all walks of life solely out of Great Compassion and concern to relieve their worries, troubles and sufferings. In this manner, He engaged Himself tirelessly and with utter dedication for a period of nearly forty-five years.

“What do you think monks, which is greater in quantity, the handful of Sinsapa leaves gathered by me or what is in the forest overhead?”

And why, monks, have I not declared them? They, monks, are not useful, are not essential to the life of purity, they do not lead to disgust, to dispassion, to cessation, to tranquillity, to full understanding, to full Enlightenment, to Nibbana. That is why, monks, they are not declared by me….”

Just before His passing away, the Buddha admonished His chief attendant monk Venerable Ananda Thera that both monks and lay disciples should regard the entire teaching taught by Him as their own teacher.

One of the noteworthy and remarkable occurrences in the life of the Buddha is that the three hallowed events in His life happening to take place under ‘a tree’. Little Prince Siddhartha was born under a ‘Sal’ tree. The Hermit Siddhartha, having eradicated all the defilements of the mind attained supreme enlightenment and became ‘Samma Sambuddha’ under a ‘Pipal’ (Asatu) tree. This tree is now well-known as ‘Bodhi’ tree. The ‘Maha Parinirvana’ of the Buddha took place at the twin Sala Trees of the Mallas at Kusinara (in modern Uttara Pradesh about 120 miles North-East of Benares).

After all, we would be able to experience, endure and enjoy the real essence of the Dhamma, the Doctrine expounded by the Blessed One, only by applying its principles into our daily lives to the best of our abilities.

Most importantly, the teaching of all the Buddhas is:

“Not to do any evil – to cultivate good

To conclude the parting words of the Gautama Buddha are as follows:

“Transient are all component things – strive with diligence.” 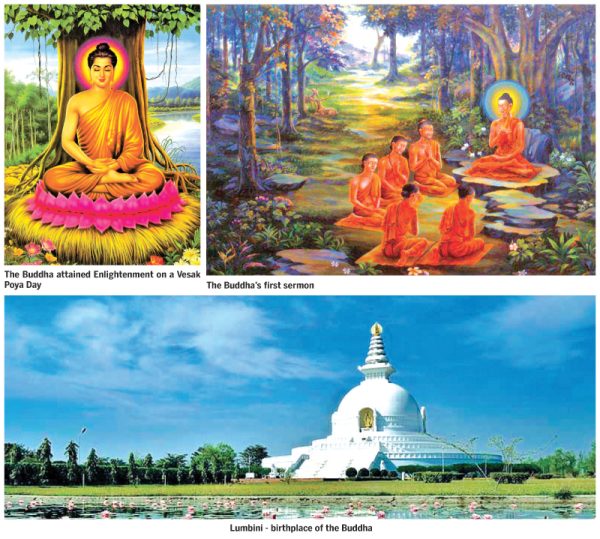