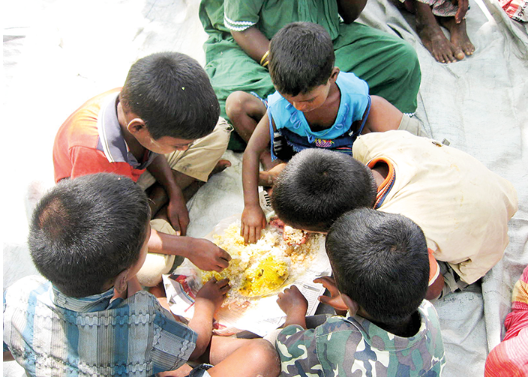 forced many families to drastically cut their daily diet. A recent report said 5.7 million including 2.3m children are in dire need of food support. 15.7% children under five-years suffer malnutrition and could succumb to starving and death. Malnutrition is second worst in Sri Lanka among South Asian countries. This would further deteriorate from October 2022 to February 2023. UNICEF further notes that due to Covid 19 pandemic, current socio economic and political crisis, and negative coping mechanisms such as institutionalization of children, school absenteeism/drop out, limited food intake had been aggravated.

Pretend pundits such as Dr Romesh Pathirana declare there is no remarkable or unusual malnutrition among our children, and SLPP tail waggers, defending ex Prex Gotabaya R who single handedly caused much of this disaster, loudly echo denials of a truth exposed by UNICEF, corroborated by WHO and the World Food Program.I believe implicitly the world organizations. I not only disbelieve but pugnaciously pooh pooh the deniers of this truth. So I decided to ask around.

First to answer me was Aravinda who lives in Kelaniya and has his mulgedera in Matugama, where he recently spent two days helping his father harvest his paddy. Machines do it but drivers and helpers have to be fed and paid and of course treated to the cheering, bolstering tot. He said he took a bottle of arrack with him and it was drained before lunch. Cost Rs 2,000. Before dinner they would, on their own money, drink kassippu: a bottle costing Rs 1,200 or so, up from around Rs 700.

Talking of food, he said the villages around his father’s were not short of rice since they store the previous harvest, but they have had to give up eating meat, and even a variety of vegetables due to prevailing high costs. Fresh water fish is available. He expressed a view held by many, me included, that real poverty in food and income was among the urban labour. City dwelling, daily paid labourers are still hit, though not so badly as during the pandemic. People cannot afford to pay wages. Thus labourers’ children and wives suffer, and this suffering is mostly in families where the father drinks alcoholic stuff excessively. Malnutrition is rampant among such families and we know many a man forgets he is a husband with a wife and children when he imbibes the devil’s brew. He turns inhuman. If he earns Rs 3,000 a day he will spend half or more on drink and often indulges in other vices.

I sought information from a retiree from England who spends much time in Sri Lanka to help the underprivileged, spending his entire pension. He has built two hostels for boys and girls in a largish school in Mallavi in Vavuniya and often stays over in the boys’ hostel seeing to how things are done. He says the kids get fresh water fish on Saturdays and Sundays, eggs at least thrice a week. The hostels have their poultry and dairy farms getting about 200 eggs daily and more than enough milk, but with price of poultry food skyrocketing, the hostels now only get eggs from free ranging hens.

From some time back this quiet but wise philanthropist has been buying seedlings – coconut, arecanut, different varieties of mango, pomegranate, guava and distributing them to homes while having got the hostel gardens already boasting some bearing fruit. He says wage earners can hardly buy seedlings at around Rs 200 to 300 each, thus his help will ensure them plenty of fruit some years down the road. In the villages in close proximity to the school malnourishment in children is not evident, some even showing a bit of obesity! However, villages inhabited by those returning to the land after the civil war, though given two acres of land, are still to be self sufficient in basic food needs. In Katkulan, he said, 85 houses had been built for returning tea estate workers who opted to remain in this country during the implementation of the Srima –Shastri Pact.

Drunkenness of the menfolk is not evident, this person said. If at all, men doing heavy labour would buy a strong brew from taverns they visit. No kassippu production as far as he knows. He mentioned that greater poverty and malnutrition may be evident in villages like Kahatagasdigiliya which were thriving when the Mahaweli Scheme was closely monitored and government supervised. Elephants are somewhat of a menace but not in Mallavi.

It is a well known and accepted fact that malnourishment is starkly present in estate children. Tea estate workers now live better, most estates building separate houses instead of inhumanely cramming families into single line rooms. But the food intake is not balanced, though very often the estate store sells subsidized rice, dhal etc.

“Jaffna is OK” a young girl, holding a job in a prestigious institution, said, whose parents and siblings live in Jaffna while she runs a flat with a friend in Wellawatte. Reason for being OK: every family has some land so they were not affected with the deprivation of gas and kerosene. Rice, vegetables and fish are available and even affordable so malnutrition is not common, unless mothers lack knowledge and do not cook nutritious meals.

The labourer class in Sri Lanka generally eat a huge plate of rice with dribs and drabs of curry. This is almost traditional. But if educated and made aware of malnutrition, mothers would sure concentrate on what they cook with the limited means at hand.

A doctor contacted in Killinochchi replied my inquiring email thus: “Actually we will be getting some information since we are conducting the Nutrition Month of Puttalam District in two weeks or so. But it might take some time to gather the data and consolidate it. We are trying to expedite the process to gain some insight into the real ground situation.” Unfortunately he failed to give me basic info on the present situation in his area.

Distribution and reasons for malnourishment

Villagers have jak, manioc and such like. They share produce, so going without meals may not be common in interior villages in rain blessed, vegetation covered areas. One huge negative even in these villages is an imbibing father. I make bold to say that the majority of poorer people, more urban than rural, suffer greatly from the head of the household being a drunkard. Not only is money wasted but such men cause immense physical and emotional damage to wives and children. Wives become despondent and unresponsive and children drop out of school. In these homes malnutrition is rampant.

Triposha was stopped due to lack of foreign currency, I heard. The midday meal may not be given in schools as of now. I remember teaching in a remote school down South in the 1960s. The children were all fairly well off, so they used the given midday bun as a missile to attack each other. Supervised, they had to drink the mug of milk given.

Left to Ministers in charge and advisors. I feel the greatest need is for people to wake up to realities and not keep stretching their hands out to charity. This is an ingrained habit in our country, accompanied by the idea the government must educate them and care for them when sick all for free and distribute free food and money too. Watching TV news of villagers having food difficulty and prices rising far beyond their means, I hear the constant wail of ‘how can I feed my children; death is better.’ Why not grow vegetable, manioc etc?

The need of the hour is awareness creating and of course the govt. not allowing food scarcities and fleecing of people by traders and grain hoarders. We have an excellent health service at grassroots level; let those officers advice mothers on cooking nutritious meals even with limited means.

My weekly house cleaning woman’s latest tale is universal in this land of ours. It encompasses trouble creating superstition and belief in the occult; weak men taking the easiest way out; the older generation burdened unfairly; and final sufferers – the children.

Rupa lives in a hamlet in Ragama and travels by train to Colombo to clean homes, now greatly reduced in number. Her son is a fish vendor, buying fish cheap and toting it around on his bicyle. Three children with the eldest girl employed but earning a pittance. Woman was innately lazy but upped and wanted to go overseas to work. Then she was told she had an apalé and dishtiya of sorts and took to bed. The man could not afford his fish business. Rupa had to cook for the entire family since the kids came to her hungry. Suddenly an uproar: strong men bringing the man back from the rail track where he was poised to leap before the oncoming train (truly or pretending we cannot say!). And who bears the burden of all this and sweats and toils to earn more to feed an entire family plus herself? Rupa, at 68-years, deserving rest and peace.

That is the NOW Sri Lanka for you!