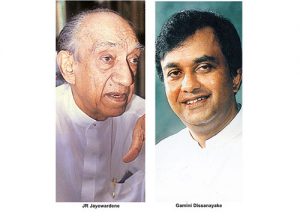 After another routine workday at the Mahaweli Center in October 1987, I dropped in, as was my wont, on my boss, Minister Gamini Dissanayake at his Alfred House Gardens home. The Minister was involved in a lively discussion with his senior advisers about the Indo-Sri Lanka Peace Accord that had been signed between the two nations on July 29, 1987.

From August 1987, the Indian Peace Keeping Force (IPKF), who had taken over the military function in Jaffna, was neglecting its prime duty, that of ending the civil war between militant Sri Lankan Tamil nationalists, principally the Liberation Tigers of Tamil Eelam (LTTE) and the Sri Lankan military. The IPKF had taken no action against the LTTE, and in fact were working with the Tigers to eliminate the other Tamil groups like the Tamil United Liberation Front (TLUF).

The discussion was continuing when I decided to call it a day. I was on my way home, when I decided (a temptation I had often found most difficult to resist) to stop for a drink and play a little Blackjack at my favorite casino in Kollupitiya. That evening was a rare event for me. I had an amazing winning streak right from the start, and by the end of 30 minutes, had won far more than I expected. I was also tired after a day’s work, so decided, for a change, to quit while I was ahead, and go home.

When I got home, I was told that Minister Dissanayake had been phoning me, asking me to contact his office on a matter of urgency. The urgent matter being that I had been included in a Sri Lankan delegation to Vancouver under the leadership of Minister Dissanayake; that I should hand over my passport to his secretary immediately, to get a visa to Canada. We were scheduled to leave for Vancouver the following morning! The karmic merit I had earned by leaving the casino and rushing back to the bosom of my loving, if surprised, family paid immediate dividends.

I later learned that Minister Dissanayake had been ordered by President Jayewardene to represent him as his Special Representative at the Commonwealth Heads of Government Meeting (CHOGM), scheduled to be held between October 13 and October 17, 1987, in Vancouver, Canada.

The Sri Lankan delegation was led by Foreign Minister, A.C.S. Hameed. Minister Dissanayake had no role in the actual Conference. His responsibility was to seek the assistance of other heads of government, like the host, PM Brian Mulroney, Margaret Thatcher, PM of the UK, Lee Kwan Yew, PM of Singapore, David Lange, PM of New Zealand, to name a few, to persuade PM Rajiv Gandhi to instruct the Indian Peace Keeping Force (IPKF) to implement the terms of the Indo-Sri Lankan Peace Accord. This they had been neglecting over the past three months.

Their respective delegations had given us the questions they were prepared to answer during their TV interviews. President Jayewardene’s Secretary and I tailored the questions accordingly. Many of the Commonwealth leaders were prepared to answer most of the questions we had prepared for them. PM Lee Kwan Yew was especially supportive, and did not restrict us in any way. But I do remember the Iron Lady, Margaret Thatcher specified that she would answer one question, and one question only – whether she approves of the Indo-Sri Lanka Accord or not.

Then came the bombshell – for me. Minister Dissanayake, who always had a wry sense of humor, decided that I should interview PM Lee Kwan Yew, on TV! I was dumbstruck. I know I talk a lot at social gatherings of friends, and in fact have been sharply criticized for this annoying behavior. But I have a mortal fear of speaking before an audience – I believe the phobia is called stage fright. My pathetic objections were summarily dismissed, and I was scheduled to interview the Great Man the following day. I had a dismal night, even contemplating suicide, and had to rush the following morning to buy a suit.

I am getting ahead of myself. I had the great good fortune to be in the same room while Sri Lankan TV interviewed world leaders, a highlight of my life. Everything seemed to be going smoothly, until it was the Iron Lady’s turn. She walked into the room with a commanding presence, followed at a respectful distance by her formidable bodyguard. I was in the presence of a lady I was immediately in awe, even fearful, of. A fear that most men reserve only for their wives.

She sat down, and the interview began cordially enough. The interviewer asked her the prepared question, and she nodded, Yes, the government of the United Kingdom is supportive of the Indo-Sri Lanka Peace Accord. As she was getting up, the interviewer did the unthinkable, and started to ask her another question. Before he could reach the third word, Ms. Thatcher stood up, banging her fists on the table and with fire in her eyes, said, I SAID ONE QUESTION, AND ONE QUESTION ONLY! And stormed off. If looks could kill, there would have been a coffin on our return flight.

Then came my moment of doom, the interview with PM Lee Kwan Yew, a leader I had always admired, though from a great distance. I had never imagined that I would have the honor of shaking his hand and sitting next to him. While the TV crew were doing their preparatory work, my interviewee saw that I was agitated, pretty obvious because I was sweating profusely. I managed to stutter to him, please forgive me, sir, I have never interviewed anyone before in my life. He smiled, put me completely at my ease, and after my first question, took over the interview. A most impressive and persuasive performance in support of the Sri Lankan position; and, more importantly to me, one that saved me from making an absolute ass of myself before a worldwide audience.

We had quite a lot of free time during the Conference, especially in the evenings. Many of us visited Vancouver’s watering holes to indulge in our favorite pastime. I was pleasantly amazed that just about every bar in Vancouver had an attraction I had never come across in taverns anywhere else. At regular intervals, beautiful young female dancers performed a striptease in a boxing ring specially constructed for the performance. A 15-minute dance in three stages, the nature of which I will leave to your imagination. Being married men, we did not go as far as to sit in the gynecologists’ row, as the seats immediately below the ring were named. But I would be lying if I said that these “performances” didn’t make my whisky taste that much more malty.

Of course, there are sleazy “Gentlemen’s Clubs” in cities like Los Angeles and Amsterdam, but they plied their trade in assigned “red light zones”. This type of entertainment was not ubiquitous elsewhere, in my experience, as it was in Vancouver.

On the last evening before we left Vancouver, we decided to treat ourselves to dining at one of the poshest bars, famous for its “performances”. There was a most distinguished older gentleman in our delegation we had never before dared to invite to these excursions. I suggested we invite him and he readily agreed to accompany us. Everything went well, until two ladies climbed up to the ring and proceeded to enact a most aesthetically pleasing lesbian performance. It was obvious to us that the older gentleman was getting more than a little agitated, and we all decided to leave, apologizing to him that we had been totally unaware that there were bars in Vancouver with such lewd performances. Having comforted him with this lie, we left him at the hotel in a reasonably calm state of mind. Then we immediately rushed back to the bar to catch the tail end (no pun intended) of the performance. Hell, it was our last night in a beautiful city.

This incident took me back almost 30 years, when I was accompanying my mother shopping at Oxford Street in London in the late 50s. I was 17 years old, and my function was to help with the many purchases of my shopaholic mother. After a couple of hours, she said she was tired and suggested that we catch our breath, watching a movie at one of those little cinemas in Oxford Street which specialized in “foreign” films. Breath was certainly caught, when she realized that she was exposing her innocent teenage son to a Swedish film featuring a couple of lesbian lovers, frolicking in a lake in innocent nudity. I had never seen my mother move so fast. I followed, reluctantly.

Our Vancouver mission was a complete success. The IPKF began their offensive against the Tigers within a month of our return from Vancouver. An offensive which led to the two darkest decades of violence and tragedy in Sri Lanka’s history.