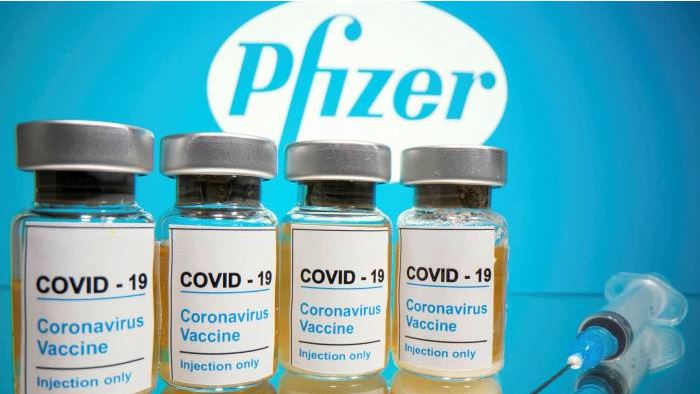 Call it as you may (Pfizer/Pfizert),while Pfizer “Viagra” is for the “raiser”, for Corona Virus ?, you could do worse than ask for a vaccination bearing the same proud name and reputation.

Call it what you will, my preference has always been for this particular Vaccine

from the very onset of this Virus, plus all variants of it that may be heading our way from wherever. I rest my case.

e’Lanka’s thanks go out to both Keith Bennett and Sunny Perera (altho, even though, his article becomes a little bit “rainy”, sometimes), his name remains Sunny. To all our readers everywhere, please read this, with my compliments.

An interesting report about the Pfizert Vaccine enough to cause concerns

This is straight from the CEO of Pfizer., Albert Bourla, after generating US$33.5 Billion, this year.
So, we may have to have more vaccines.

Will the Pfizer be charged by the US Law enforcement, for selling something sub-standard ? Very doubtful,
as it is a product os USA.

Pfizer CEO Albert Bourla thinks it’s “likely” that a variant could emerge that evades protection by the company’s COVID-19 vaccine.
Other scientific experts have expressed similar views.
However, Bourla stated that Pfizer could quickly develop a new vaccine that could fight any new variants.

On nearly every front, the COVID-19 vaccine developed by Pfizer (NYSE:PFE) and BioNTech (NASDAQ:BNTX) has been a blazing success. It was the first to win U.S. Emergency Use Authorization and full approval. More doses of the Pfizer-BioNTech vaccine have been given to Americans than any other — by far. The vaccine is on track to generate sales of $33.5 billion this year. Pfizer’s revenue growth could just be getting started.

But is all of this success only temporary? Perhaps so. Here’s why Pfizer thinks that its COVID-19 vaccine’s days could be numbered.

Pfizer CEO Albert Bourla told Fox News last week that the company’s scientists are researching every coronavirus variant that emerges to determine if it “can escape the protection of our vaccine.” Bourla said that so far no such variant has been found. Then he added, “But we believe that it is likely that one day, one of them will emerge.”

Centers for Disease Control and Prevention (CDC) Director Rochelle Walensky seems to agree with Bourla’s view. Walensky stated in July, “These vaccines operate really well in protecting us from severe disease and death, but the big concern is that the next variant that might emerge — just a few mutations, potentially, away — could potentially evade our vaccines.”

Anthony Fauci, head of the National Institute of Allergy and Infectious Diseases and chief medical advisor to President Biden, is also concerned about vaccine-resistant variants. He warned in an interview with McClatchy earlier this month that there could be an “ample chance” for a variant to emerge that current vaccines won’t be nearly as effective against.

Some healthcare experts outside the U.S. concur. Scientists in the United Kingdom released an analysis on July 26 that stated it’s “almost certain” that coronavirus variants will emerge “that eventually leads to current vaccine failure.”
Battling the variants

All of this might sound like dire and depressing news. However, Bourla remained upbeat about Pfizer’s ability to rapidly adapt to any new variants.

He stated in the Fox News interview, “We have built a process that within 95 days from the day that we identify a variant as a variant of concern, we will be able to have a vaccine tailor-made against this variant.” That’s a remarkably quick turnaround from the first identification of a potential variant that’s resistant to current vaccines to the development of a new vaccine that can fight the new variant.

Bourla’s time frame doesn’t include the testing that would be required for any new vaccine version. However, the prospects of vaccine-resistant variants aren’t nearly as troubling as they might otherwise be without the potential for such a speedy development of a new vaccine.

Pfizer and BioNTech won’t be alone in responding quickly to emerging variants. Moderna (NASDAQ:MRNA) President Stephen Hoge said in his company’s second-quarter conference call that it’s likely for significant increases in breakthrough infections to occur with the Moderna vaccine. Hoge added that Moderna is being vigilant in responding to new variants.
A silver lining for mRNA vaccine makers

There could be a silver lining for Pfizer (and for BioNTech and Moderna as well) if variants emerge that are resistant to current vaccines. The scenario would increase the demand for newer vaccines that could provide protection against the new variants.

Messenger RNA (mRNA) technology offers a way to rapidly develop new vaccines that hold the potential to be effective against emerging variants. As the leaders in mRNA vaccines, Pfizer, BioNTech, and Moderna would be the most likely to be able to quickly develop and test new vaccines to replace current vaccines.

It’s possible that the coronavirus won’t mutate enough to render current vaccines ineffective. If it happens, though, the leading vaccine stocks could soar even higher than they already have.

Before you consider Pfizer Inc., you’ll want to hear this.

Our award-winning analyst team just revealed what they believe are the 10 best stocks for investors to buy right now… and Pfizer Inc. wasn’t one of them.

The online investing service they’ve run for nearly two decades, Motley Fool Stock Advisor, has beaten the stock market by over 4X.* And right now, they think there are 10 stocks that are better buys.