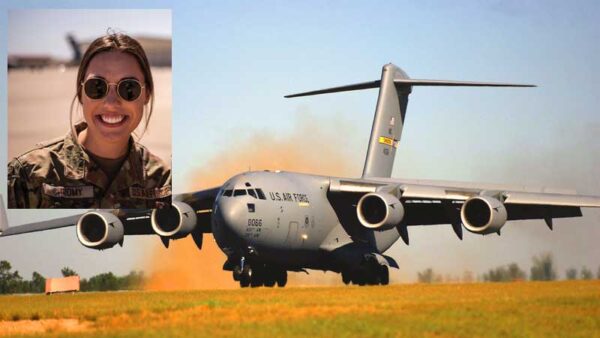 Speaking exclusively to the Daily News, Amelia Chromy, an officer attached to the Travis Air Force Base, California explained the details and capabilities of this amazing plane. The C-17 is the most flexible aircraft to enter the airlift force of the United States Air Force. It is capable of rapid strategic delivery of troops and assortments of cargo to any forward base. The induction of this flying giant has augmented the worldwide air mobility requirements of the United States Air Force.

Aviation enthusiasts have been dazzled by large aircraft for decades. The heavy transporters that serve the US military enjoy their own realm of glory. The United States Air Force (USAF) has an astonishing fleet of aircraft – both planes and helicopters.

In this narrative, we discover the flying giant C-17 Globemaster, which is based at the Travis Air Force Base, California. This base is home to the 60th Air Mobility Wing, which is a key component of the USAF Air Mobility Command. Interestingly, the C-17 is the third airlifter to bear the Globemaster name. Prior to this aircraft two other aircraft served the USAF; they are the C-74 and C-124 models. The present C-17 Squadron is known as the 21st Airlift Squadron (the Bee Liners). This squadron can trace its history as far back as March 1942. Years ago the pilots had flown the B-17 Flying Fortress and the C-130 Hercules transport plane. At present the C-17 Squadron has taken part in many operations, and in the recent past has been actively engaged in delivering relief items with regard to controlling the Covid-19 pandemic.

Speaking exclusively to the Daily News, Amelia Chromy, an officer attached to the Travis Air Force Base, California explained the details and capabilities of this amazing plane. The C-17 is the most flexible aircraft to enter the airlift force of the United States Air Force. It is capable of rapid strategic delivery of troops and assortments of cargo to any forward base. The induction of this flying giant has augmented the worldwide air mobility requirements of the United States Air Force. The C-17 engaged in its maiden flight in September 1991, and the first production plane was delivered to the Charleston Air Force Base. The first squadron of the C-17 was the 17th Airlift Squadron operational by 1995.

The C-17 Globemaster III was inducted at the Travis Air Force Base (AFB) in August 2006. The Travis AFB is a massive cantonment that covers an area of 6,455 acres with nearly 400 buildings. In addition to the Globemaster, this base also has flying formations of the C-5M Super Galaxy aircraft and the KC-10 Extender aircraft. Aviation enthusiasts know that the KC-10 is a giant aerial refuelling tanker aircraft which can safely carry 356,000 pounds of fuel. The 60th Air Mobility Wing has approximately 7,060 active duty Air Force personnel, with a large number of reserve personnel.

In addition to flying out of the Travis Air Force Base, California, the Globemaster is also flown by pilots attached to the Dover Air Force Base, Delaware, Joint Base Lewis McChord, Washington and Joint Base Charleston, New Jersey. In addition, some Air National Guard bases also fly this aircraft.

The C-17 Globemaster is a high wing, four-engine, T-tail military airlifter. It has the capacity to carry a massive payload of 169,000 pounds. The aircraft has an international range. Though it is so large the Globemaster can take off and land on small airfields, on runways measuring just 3,500 feet. In addition the C-17 can perform tactical airlift and airdrop missions. Over the past few decades, the size and weight of the US mechanised firepower have consistently evolved. In this backdrop, the formidable Globemaster can deliver its payload for combat, humanitarian or peacekeeping missions. According to an Air Force officer, reliability and maintainability are the enduring hallmarks of the C-17 system. On a visit to the USA in the late 1990s, I was able to visit an air force base and witness the massive C-5 Galaxy transport aircraft. This was a huge airplane with a length of 274 feet.

The Globemaster measures 174 feet in length (53 metres) with an incredible wingspan of 169 feet (51 metres) and a height of 55 feet. One might wonder how such a heavy plane becomes airborne. The aircraft is powered by four Pratt & Whitney F117-PW-100 turbofan engines. The engine weighs 7,100 pounds and effortlessly unleashes 40,440 pounds of thrust that energises the Globemaster. Thrust reversers enable the planes to reverse whilst taxing. These advanced design characteristics enable the C-17 to easily fly in and out of short runways. The cruise speed is almost 450 knots at an aerial ceiling of 28,000 feet. The Globemaster has a service ceiling of 45,000 feet. Its wings display a supercritical airfoil design; the flaps are fixed vane and simple hinged. This creates less drag and high efficiency. 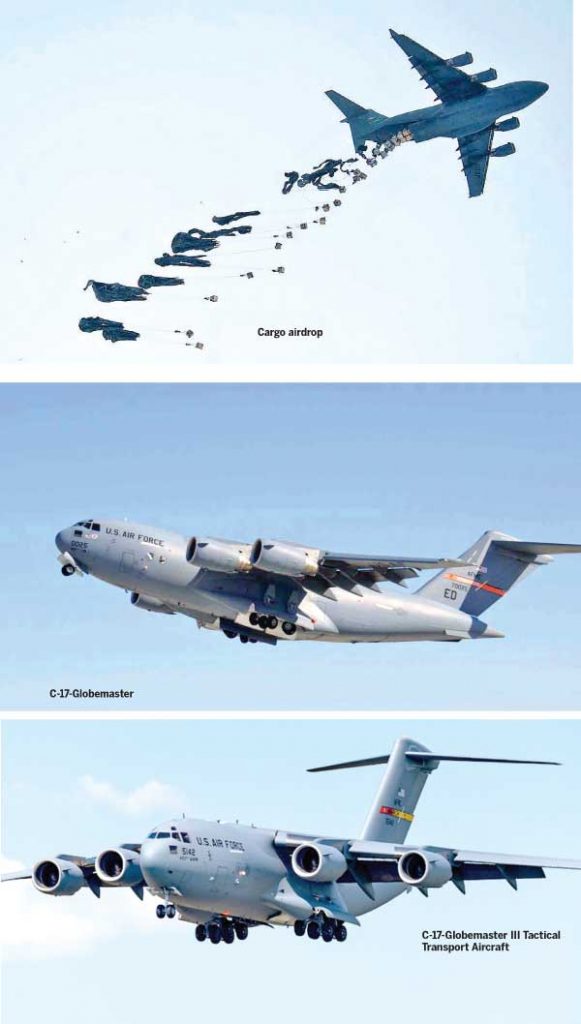 For cargo operations, the crew of this aircraft consists of three highly skilled Air Force personnel, a pilot, a co-pilot and the loadmaster. The modern fully integrated electronic cockpit enables the pilots to operate all systems. The advanced cargo systems are duly operated by an experienced loadmaster – the person who is responsible for loading this massive aircraft. The loadmaster is accountable for properly loading, securing and escorting all cargo and passengers. Aircraft loadmasters custom load before every flight, as each mission is different. The cargo load must be distributed evenly. Cargo is loaded onto the aircraft by a large aft ramp and door system. The cargo compartment is 88 feet long. The C-17 is capable of carrying and delivering many types of equipment used by the United States Army, including the highly formidable M-1 Abrams Main Battle Tank (MBT). Designed by Chrysler Defence the composite armoured Abrams tank is the main battle tank of the US Army and US Marine Corps, with a weight of 68 tonnes. This battle tank can be airlifted by the Globemaster aircraft which is testament to the power of this plane. The C-17 can airdrop a 60,000-pound payload in a single drop. Another unique feature of this aircraft is that its flat floor can be rolled to accommodate tracked military vehicles. The pilots of the Globemaster can turn the aircraft on any type of airfield using a special three-point star turn.

For combat deployments, this versatile plane can deliver 134 soldiers with their accompanying equipment to any battlefield area. Once airborne, the pilots can fly this giant plane for 2,400 nautical miles without refuelling. The aircrews also undertake aero-medical missions. During these flights that save lives, an additional crew of five medical technicians and nurses join the C-17. The Travis AFB has many female Air Force personnel, including those who take pride in flying the Globemaster alongside their male colleagues.

In 2018, an all-women crew flew a C-17 piloted by Captain Jamie Larivee. For the servicemen and servicewomen attached to the Travis Air Force Base, California and their families, there are many programmes that enhance camaraderie and keep them knit as one family. The base operates many volunteer programmes that encourage spouses and children of the USSF personnel to interact in welfare and sports and thereby creates stronger bonds. The trustworthy C-17 Globemaster is a majestic aircraft that truly dominates the skies.