US envoy and Lankan President meet and pledge to cooperate for Lanka’s betterment Relations had a rocky start after the envoy’s critical tweets – By P.K.Balachandran 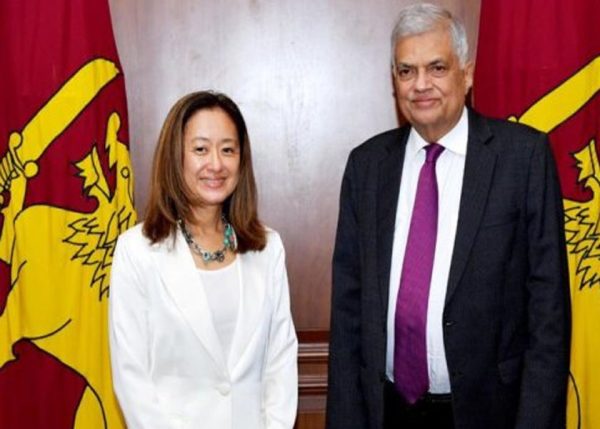 The US Ambassador to Sri Lanka Julie Chung and the Lankan President Ranil Wickremesinghe met here on Wednesday and pledged to cooperate for Sri Lanka’s “better future”.

The relations between the two had rocky with Ambassador Chung’s tweets on the way Wickremesinghe handled the protesters drawing censure from Wickremesinghe at a meeting of diplomats.

When the two met, Ambassador Chung discussed advancing the existing relations between Sri Lanka and the United States “through a strong approach,” according to a release from the President’s Media Division.

The Ambassador, it added, “assured that she would provide support for the future initiatives of the new government.”

In her tweet on the meeting, Chung noted that Wickremesinghe has taken office “at a time when Sri Lanka stands at a crossroads.” She then went on to say that they discussed how Sri Lanka arrived at this point of economic and political crisis, and how the two countries “can work together to navigate toward a brighter future for all.”

She then went on to instruct the Lankan government on its duties saying: “The President & cabinet have an opportunity and an obligation to respond to the calls of Sri Lankans for a better future. This is not the time to crack down on citizens, but instead to look ahead at the immediate and tangible steps the Government can take to regain the trust of the people, restore stability, and rebuild the economy.”

At a meeting with diplomats stationed in Colombo, President Wickremesinghe reaffirmed Sri Lanka’s commitment to upholding the rights of peaceful, non-violent assembly. But he also pointed out that the protesters had not acted as per norms, which do not allow protesters to violate the sanctity of the institutions of the State such as government offices (and even private space without the consent of the owners of the private space).”

Wickremesinghe pointed out that even in the US, there are clear norms regarding protests as stated by the American Civil Liberties Union (see: https://www.aclu.org/know-your-rights/protesters-rights). The ACLU states that protesters are not permitted to “block government buildings and interfere with other purposes the property was designed for.”

The ACLU instructions went on to say: “Your rights are strongest in what are known as ‘traditional public forums,’ such as streets, sidewalks and parks. You also likely have the right to speak out on other public property, like plazas in front of government buildings, as long as you are not blocking access to the government building or interfering with other purposes the property was designed for.”

Wickremesinghe told the diplomats that measures had been taken to ensure that non-violent protests were allowed to proceed within the city without endangering property or lives. Facilities within Colombo, such as the Open-Air Theatre at Viharamahadevi Park, the New Town Hall, Hyde Park and Campbell Park were all being made available to non-violent protests.

The President appealed to the diplomats not to go entirely by social media reports but fact-check with concerned officials of the government before tweeting their comments.