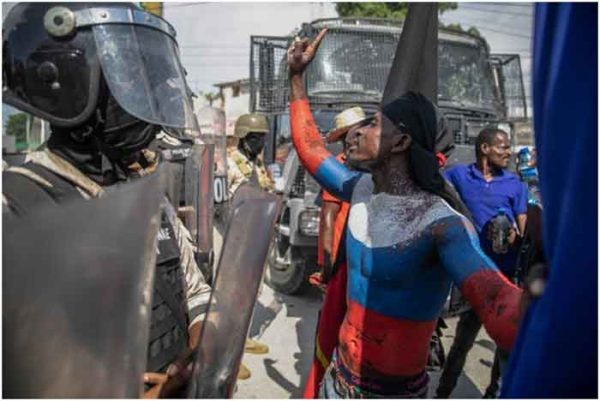 A protester in the colors of the Russian flag expressed opposition to international intervention in Haiti outside the U.S. Embassy in Port-au-Prince on Monday. PHOTO: ODELYN JOSEPH/ASSOCIATED PRESS

The United Nations is expected to vote this week on sanctions against a powerful gang leader in Haiti who has blocked supplies of food, fuel and drinking water as the impoverished Caribbean country struggles with a cholera outbreak.

The U.S. and Canada have sent “security equipment”, including tactical and armored vehicles, to Haiti to help the country tackle a political, economic and security crisis, according to a joint statement.

NPR reports: The U.S. and Canada sent armored vehicles and other supplies to Haiti on Saturday.

The sanctions resolution, drafted by the U.S. and Mexico, would target gang leader Jimmy Cherizier — known as Barbecue — and others, and would aim to clamp down on illicit arms sales to Haiti. The U.S. ambassador to the U.N., Linda Thomas-Greenfield, had called Monday for a non-U.N. mission led by a yet-to-be-named country.

A revised draft of the sanctions resolution debated Wednesday by Security Council members dropped language from an earlier draft encouraging the deployment of a multinational force to help the Haitian police restore order in the nation, the poorest in the Americas.

The draft said that Haiti’s situation “continues to constitute a threat to international peace and security in the region,” leaving open the possibility of the U.N. eventually sending a security force to the country.

Such a force would likely be composed of police and soldiers, said a U.N. official. “The police are better trained to deal with the gangs, while the military would provide the robust element,” the official said.

Russia, one of the Security Council’s five permanent members, has voiced opposition to the proposed sanctions, while a Chinese representative at the U.N. questioned the wisdom of sending a security force.

“At a time when the Haitian government lacks legitimacy and is unable to govern, will sending such a rapid-reaction force to Haiti receive the understanding, support, or even trigger violent confrontation?” asked Geng Shuang, speaking for China at the UN Security Council on Monday.

A senior Latin American official said there is not an obvious country in the region that is willing to lead a force. The U.S. appears reluctant.

Another obstacle to an eventual mission is the opposition of many Haitians to foreign intervention.

Thousands of people across Haiti protested Monday, some waving Russian flags in front of the U.S. Embassy in Port-au-Prince. Opposition parties and civil-society groups opposed to Prime Minister Ariel Henry say that an intervention would prop up his government.

“It is unconstitutional and an act against the demands of the Haitian people,” said Port-au-Prince resident Josue Merilein.

The U.S. and Canada sent armored vehicles and other supplies to Haiti on Saturday to help police fight a powerful gang amid a pending request from the Haitian government for the immediate deployment of foreign troops.

A U.S. State Department statement said the equipment was bought by Haiti’s government, but it did not provide further details on the supplies flown on military aircraft to the capital of Port-au-Prince.

A spokesman for the U.S. military’s Southern Command said he could not provide further details on the supplies sent, though he added it was a joint operation involving the U.S. Air Force and Royal Canadian Air Force.

This equipment will assist the HNP [Haitian National Police] in their fight against criminal actors who are fomenting violence and disrupting the flow of critically-needed humanitarian assistance, hindering efforts to halt the spread of cholera, read the statement released on Saturday by the U.S. and Canada.

The equipment arrived more than a month after one of Haiti’s most powerful gangs surrounded a fuel terminal and demanded the resignation of Prime Minister Ariel Henry. Demonstrators also have blocked roads in major cities to protest a sharp rise in fuel prices after Henry announced in early September that his administration could no longer afford to subsidize fuel.

Since then, gas stations have closed, hospitals have cut back on services and banks and grocery stores open on a limited basis as fuel, water and other supplies dwindle across Haiti.

The owners of the fuel terminal announced Saturday that armed men had attacked their installations for a second time and fled with more than 28,000 gallons of petroleum products after overpowering surveillance and emergency personnel at the facility.

It was the second time this week that armed men broke into the terminal, which stores more than 10 million gallons of gasoline and diesel and more than 800,000 gallons of kerosene.

Last week, in an attempt to quell the violence and confront the gangs, Henry asked the international community to send military assistance. His plea was joined by UN chief Antonio Guterres who called for the immediate deployment of a special armed force.

But the move sparked further outrage, with thousands of people taking to the street against the “foreign occupation”. Several people were shot and one person was reported to have been killed.

Haiti’s National Police has struggled to control gangs with its limited resources and chronic understaffing, with only some 12,800 active officers in a country of more than 11 million people.

One of the poorest countries in the world, Haiti has been suffering from periodic natural disasters and a longstanding political crisis made worse after the killing of Moise. Since then gangs have only grown more powerful.

Many Haitians have demanded the resignation of Prime Minister Henry, whose government is serving in an interim capacity after he indefinitely delayed an election previously scheduled for November 2021 due to the rising political instability.

Protests and riots have broken out around Haiti since the government announced last month that it will cut fuel subsidies.

The gang is demanding that the prime minister, Ariel Henry, step down.

In addition to political corruption, the island struggles with economic instability, poor infrastructure and the effects of deforestation.

The Pan American Health Organization (PAHO) said there are more than 560 suspected cases of cholera, some 300 hospitalizations and at least 35 deaths, with experts warning the numbers are likely much higher than what i’s being reported.

The PAHO said last week that cholera is resurging in Haiti, with a rising number of confirmed and suspected cases, nearly a quarter of which are among young children. With a concentration of cases in areas where violence is escalating, making access difficult, experts warn that the real scale may be much worse than expected.

Some 100 gangs control as much as two-thirds of Haiti’s national territory, engaging in activities such as contraband and arms trafficking to kidnappings, human-rights groups say. The gangs terrorize poor neighborhoods with massacres, rapes and extortion, and often have connections to powerful politicians and rich businessmen.

Nearly 60 percent of Port-au-Prince, or 1.5 million people, may now be under the control of gangs, many of which have turned to sexual assault to consolidate power, according to a UN report (PDF) published on Friday.

AP News reports, “gang demands are nothing new in Haiti, and they have grown more powerful since the July 2021 assassination.”

There seems to be no debate that Cherizier, the gang leader, has pushed Haiti deeper into crisis, where 4.7 million people are now facing acute hunger, according to the UN.

Cherizier, a former police officer, has stepped into a power vacuum amid the turmoil that followed the still-unsolved July 2021 assassination of President Jovenel Moïse.

Cherizier leads a coalition of nine gangs which for the past month have blocked off all access to the country’s main sea terminal. The violence, unrest and economic hardship that he has caused are pushing more Haitians to flee to the US.

Cherizier stands out for his political ambition and theatrical flair, including his periodic distribution of food to slum dwellers as police look on. The former policeman presents himself as a revolutionary leader fighting for Haiti’s oppressed masses.

Cherizier says he got his nickname of Barbecue because his mother was known for the barbecued chicken she sold on the streets of the slum where the family lived.

As a young man, he joined the Haitian National Police, receiving training from UN military police instructors. But much of the time he was moonlighting, setting up his own criminal gang, known as Delmas 6 after his Port-au-Prince neighborhood.

He cultivated links to the late President Moïse’s government. Haitian human-rights activists say he acted as an enforcer, terrorizing Moïse’s political enemies, especially in the massive Cité Soleil slum, while keeping a hand in lucrative kidnapping, extortion and gunrunning businesses.

Last month, Cherizier used a bulldozer to dig a deep ditch in front of the entrance to the port, blocking all traffic between the terminal and the capital of Port-au-Prince. The blockade coincides with a cholera outbreak that has killed at least 18 people in the capital amid shortages of clean water and fuel.

Cherizier’s gunmen have broken into the terminal three times, taking four tanker trucks of fuel containing more than 28,000 gallons of petroleum products, according to terminal operators. Videos posted on social media show the stolen fuel, which had an estimated value of around $700,000, being sold by the side of the road.