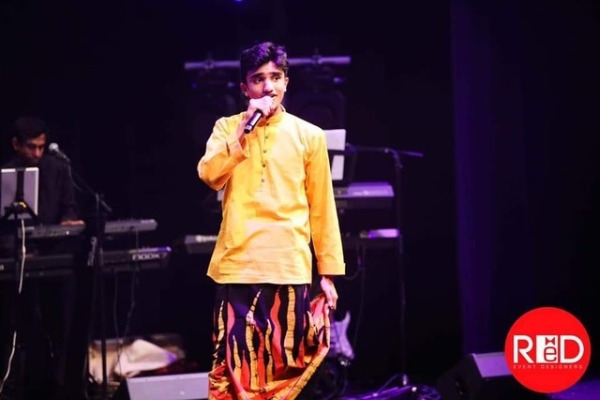 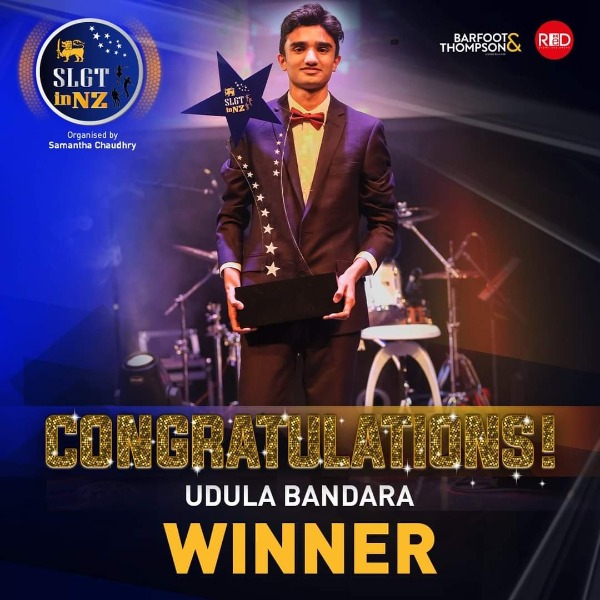 Sixteen-year old Udula Bandara from Hamilton was crowned  winner of Sri Lankans Got Talent in New Zealand (SLGT in NZ) at the grand finale held at the Dorothy Winston Centre in Auckland recently.

Live-streamed on Zoom in collaboration with Red Events Design,  (SLGT in NZ) was an entertainment talent show spurring Sri Lankans across New Zealand to showcase their talent to the world. The contest was judged live  by  an expert panel of Sri Lankan artistes, with extensive knowledge of Sri Lankan music, dance and instruments, and the ability to provide feedback to the contestants but who remained anonymous in the preliminary rounds.  The judges for the final of SLGT included Manoj Peshala and Edward Jayakody,

While the judges were responsible for selecting the most talented performers, viewers were afforded the opportunity to vote online for the “most popular contestant” (SLGT in NZ).   The event was open to contestants up to the age of sixty.

“Considerable talent exists among Sri Lankans in New Zealand but denied the opportunity to state their case”  said Samantha Chaudry of Auckland,  organiser of the event with the support from RED Event Design.   “The beauty of the program is that ordinary people with no exposure or reference have the chance to come on stage, participate in front of a studio audience and at the end of the series the rightful winner pockets NZ$ 5,000.  Usually we see familiar faces perform at regular events and contests, but there are those who possess the flair but lack confidence to perform on stage.  Hence it was my desire to conduct a series of workshops  to boost their confidence and unearth  those hidden treasures” she added.  Ten semi-finalists were coached and mentored – focused on learning techniques and performing on stage – from industry experts including composer and lyricist Priyananda Wijesundera and music director Don Dilantha.  The Sri Lankan Dancing Academy in Auckland run by Nishi was also involved in the programme.

From an initial list of 28 contestants, 22 progressed to round two, pruned to 15 in the third, ten in the fourth and five contested the Grand Finale.

Udula started singing from the age of five encouraged by his parents, Vasanta Bandara and Menaka Dissanayake.  He also learnt  to twinkle the ivories and strum the guitar at a tender age and credits his maternal uncle, Kapila Dissanayake, for encouraging him to enter (SLGT in NZ).  Udula received his voice training under the tutelage of his  mother, Menaka Dissanayake and it is mum, fully aware of Udula’s voice range, who chose his songs throughout the competition.

For the grand finale, Udula accompanied himself on the piano and  delivered an emotional rendition of Lewis Capaldi’s “Someone You Loved” hitting beautiful notes and taking control. His powerful voice and amazing personality wooed the judges and his performance was “just telling a story”. He then extended his repertoire with a rousing rendition of Saman Lenin’s “Ambaruwo” proving beyond doubt his capability to perform all genre to add to his Hindi rendition of “Tum Hi Hoi” in the preliminaries – and if that was not enough, he obliged with the judges request, singing George Michael’s Careless Whisper simulating the late pop star with a pure and unique voice.   The way he handled that song was beyond his years.  It feels he’s lived an age with that voice, he’s got something special, believes in himself and wanted to make everyone proud.  Manoj Peshala who judged the final, had this to say: “even though the programme was streamed on Zoom, “I felt I was watching a live performance” comparing (SLGT in NZ) to “America’s Got Talent”.  Praising Udula, he said: “For a kid living in New Zealand, he has not lost touch with his roots and his pronunciation of Sinhala words in “Ambaruwo” is very native”.

Wijesundera has provided  the aspiring artist with the opportunity to show the world his talent.  He has laid a great platform for Udula, composing a “Jana Geethaya” for the teenager based on the theme of bee-honey collection in the rural region of Balangoda.  He has commissioned renowned Sri Lankan musician Nandasena Katuwawala for this task and  Ushan Alahakoon will undertake the  recording at his Hamilton studio.

Udula, credits the Workshop for boosting his confidence, expanding his natural ability and improving his expressions and emotions on stage.  Extremely disciplined and open to advice, the youngster’s performance at the final was a far cry from his nervous displays in the preliminaries. “I gained tremendously from the Workshop and rid myself of stage fright.  I was oozing with confidence at the final,  being able to move around freely and express myself.  It was an invaluable experience. This competition has been incredible with some amazing people who made this possible and I have gained tremendous experience with the support from my family, friends and the Sri Lankan community in Hamilton.  I feel blessed” says Udula.

Udula is inspired by Justin Bieber and Bruno Mars and is a fan of rock.  He adores Led Zeppelin and Six60, New Zealand’s five-piece band.

The five-week event also afforded all Sri Lankans living in New Zealand the opportunity to get together and appreciate New Zealand’s Sri Lankan talent and make new friendships as one big family.

Twelve-year old Dulakshi Pramodya, who dreams of becoming a psychiatrist and enjoys dancing and plays netball and basketball claimed second place dancing to Ganapathi and Devatha. Dulakshi  started dancing from the age of three and looks up to Channa and Upuli whose style she says is unique and beautiful.

Guitarist Shewon Fernando who plays old and new Sinhala hits added to his repertoire of Western and Spanish music  strummed his way to third place with Siri Sangabhodi and We Will Rock You.

Samantha has been residing in New Zealand since 1995 and (SLGT in NZ) was her brainchild.  “Following (SLGT in NZ) – our kids are now receiving invitations to perform at various functions and are being paid for their services” she adds.  Her desire is to organise an event in the future (SLGT Global) open to  all Sri Lankans living abroad.