Trinitian Ashan Ratwatte was a superb scrum half 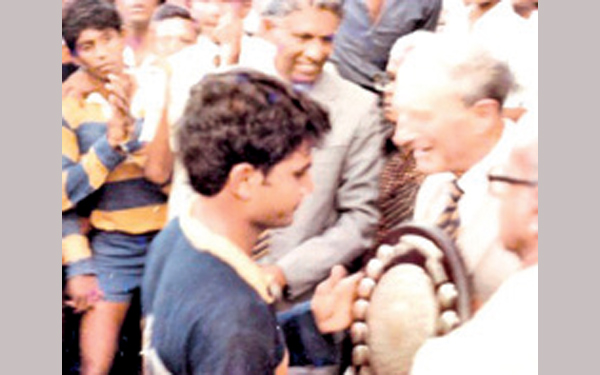 Trinity College skipper Ashan Ratwatte (second from left) receiving the Bradby Shield from the donor of the shield former Royal College principal E L Bradby after they retained the shield with an aggregate of 20-16. Also in the picture is Royal fly half Sampath Agalawatte and Royal Principal Marcus Fernando

Ashan Ratwatte, who led the Trinity College rugby side, was the only captain to receive the Bradby Shield from the donor of the shield late E L Bradby. Ashan Ratwatte a scrum-half was a top class player in the position in which he played.

He gave his best for the game of rugby and captained Trinity in 1983 and is a “Lion” winner who led the school to win many games That year they clinched the Bradby Shield by winning the First Leg 14-6 at Bogambara and losing the return match 6-10 at Longden Place.

Ashan was a natural leader on the field. His slick all-round game was matched by a true winner’s mentality. Ashan was blessed with superb speed and strength and formed great half-back partnerships for the teams he played.

In 1983 when he played for Trinity College he was under the guidance of late Col. Bertie Dias and the MIC was late S. Ariyasingam and principal was late Rev. Dr. W. G. Wickremasinghe. That year the Lions had a fine season winning the Canon De Saram Shield by beating S Thomas 7-3 and also Isipathana 6-3 He donned the Trinity jersey for four years from 1980 to 1983 along with his brothers Roshan (1981 and 1982) and Dilakshan (1983).

Ashan played for Kandy SC as a schoolboy in 1982 in the SLRFU Trophy Knock out tournament along with Thusith Seneviratne and Royal skipper Hiran Muttiah In the following year 1983 playing for his school, he led the side. Straight from school he joined Kandy SC and at that time was the number one linkman in the country and was an automatic choice to the Up-Country and the national side. He gave a big hand for Kandy Sc rugby and led the side in 1987 when this writer was the rugby convener cum team manager. From the central hills he crossed over to CR & FC and ended his rugby career in 1991.

He was a big strong lad, with tremendous stamina, who could devastate defences with his powerful long-striding surges. He didn’t need to be taught the art of playing. He was a player who looked after himself – and his team-mates – when the going got tough, .During his playing days he showed terrific stamina. Ashan always listened to advice and was a good team man. Put it this way – he always helped his team.

He grew up playing and watching rugby, then at the age of 15 started to play rugby. He never looked back; his love for the game of rugby grew and gave his best to earn a good name in the field of rugby. Ashan and his son Tharinda Ratwatte are the fourth pair of father and son combination to receive the coveted Rugby Lion’ at Trinity College.

Tharinda also led Trinity College in 2014 and piloted them to victory in the Bradby Shield by overcoming Royal College by 28-16 and 19-18 He also played for CRand FC from 2015 to 2018 before returning to his home town to play for Kandy SC from 2019.