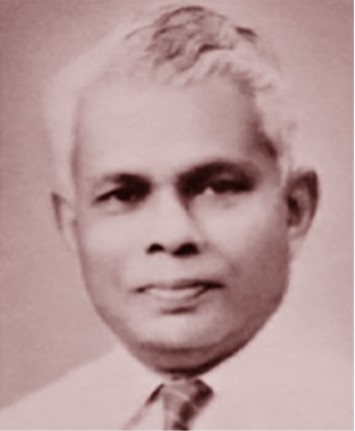 James Henry Lanerolle, who passed away on June 2, was a product of Richmond College, Galle and excelled in winning the most prestigious Darrel Medal for the best academic achievement of his year. He actively participated in oratory, debating, literary activities and athletics; he was also the editor of the College Magazine, Head Prefect and in his higher studies obtained an Honours Degree in Political Science from the University of Ceylon.

He cherished his school days very much and the education he received at Richmond College who’s teachers conditioned students to avoid pride and strive to be humble and also to cultivate good qualities – honesty, hard work and be high achievers. He loved the school hymn which he remembered verbatim until his death.

Humility is not thinking less of yourself, it’s thinking of yourself less. This quote from C S Lewis, vividly brings to life the way my uncle lived. He was indeed a humble man who walked the talk of his learnings.

Mr Lanerolle was one of five candidates who were successful at the Ceylon Civil Service examination in 1951. He held many prestigious positions in the Public Service, in the Customs Department, Economic Planning and Budget Formulation, Shipping and Planning Group of the then Ministry of Food and Agriculture and was subsequently seconded to the corporation sector holding the post of Managing Director, where he did some of the background economic research work prior to the establishment of the petroleum refinery.

Further he was appointed as the first Managing Director of the nascent Industrial Development Board and participated in the planning and establishment of several promotional agencies launched and nurtured by the original IDB, including Investment Information Bureau, the Technical Services Agency, the Export Promotions Agency, the Industrial Estates Agency and the M.D.P.C (now NIBM) etc.

He then lived abroad for some time and was re-employed as a Counsellor at the Sri Lanka Embassy in Washington DC, USA where he was in charge of economic affairs and later served as Secretary, Ministry of Shipping, Aviation and Tourism where inter-alia, he participated in formulating plans for the new airlines and major improvements in the Colombo Port. He was then appointed Secretary, Ministry of Power and Energy and Chairman CEB, and was also the Chairman of the Special Committee on Energy. A 15-year development plan for electricity which included provision for coal-fired thermal generation plant was prepared under his supervision. Further he was employed by the Commonwealth Secretariat as Advisor/Liaison Officer to the CHOGM Group on Energy.

In 1984 Mr Lanerolle joined Upali Newspapers Ltd, as Managing Director and worked very closely with Dr Seevali Ratwatte. Having held many prestigious positions in Sri Lanka and being the Managing Director of Upali Newspapers, he never lost touch with the ordinary worker but developed immense love and respect towards his employees by maintaining a close rapport with them, and at times being personally involved in resolving their individual problems.

He opened doors to many young budding journalists and listened to and valued their views. He was a very intelligent person with a vast knowledge who always loved to share his experience. Mr Lanerolle was a simple, sincere, and unassuming person with a noble and magnanimous heart.

The eldest son of Mr W A Lanerolle and Mrs Lilian Lanerolle, he spent his entire childhood at Richmond Hill, Galle. The eldest of seven children, two younger brothers, Cyril and George, and four younger sisters Kathleen, Rose, Dora and Rachel, to all of whom he was ‘Loku Aiya’. For the nieces and nephews, he was ‘James Mama’.

In 1963 he married Ms. Lilani Dias and they have a son, Dr Rushika Lanerolle, a loving daughter-in-law and adoring grandsons whose company he enjoyed very much. He was a loving husband, a father, and a loving son to his parents.

I remember when living close to my grandparents’ house, he used to visit them, and my grandparents used to sit outside under the porch and await his arrival. He sat on a certain chair in the house and always hummed a song when he was not chatting. He was a very cheerful person and used to enjoy many jokes with his nieces and nephews.

We will miss you, but we have many fond memories to cherish and smile about. May your soul rest in peace until we meet you again, James Mama.

“And we know that God works all this together for the good of those who love Him, who are called according to His purpose.” – Romans 8:28