Through the wilds of Kumana- BY MAHIL WIJESINGHE 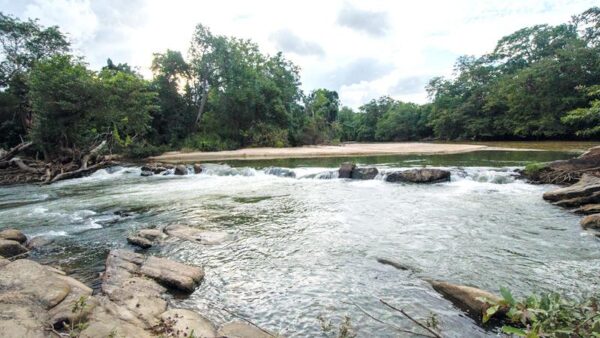 A visit to the East is not complete without a trip to Kumana. Enter the solitude of the wilderness where the untamed reign, remember that you are only a guest on a brief visit.

Before we left Okanda, we visited the famed Ukanthamalai Murugan Kovil also called Okanda Devalaya, dedicated to God Murugan and Valli Amma, and lying on a massive rock boulder just outside the main entrance of the Kumana National Park, which we featured in the Sunday Observer last week. 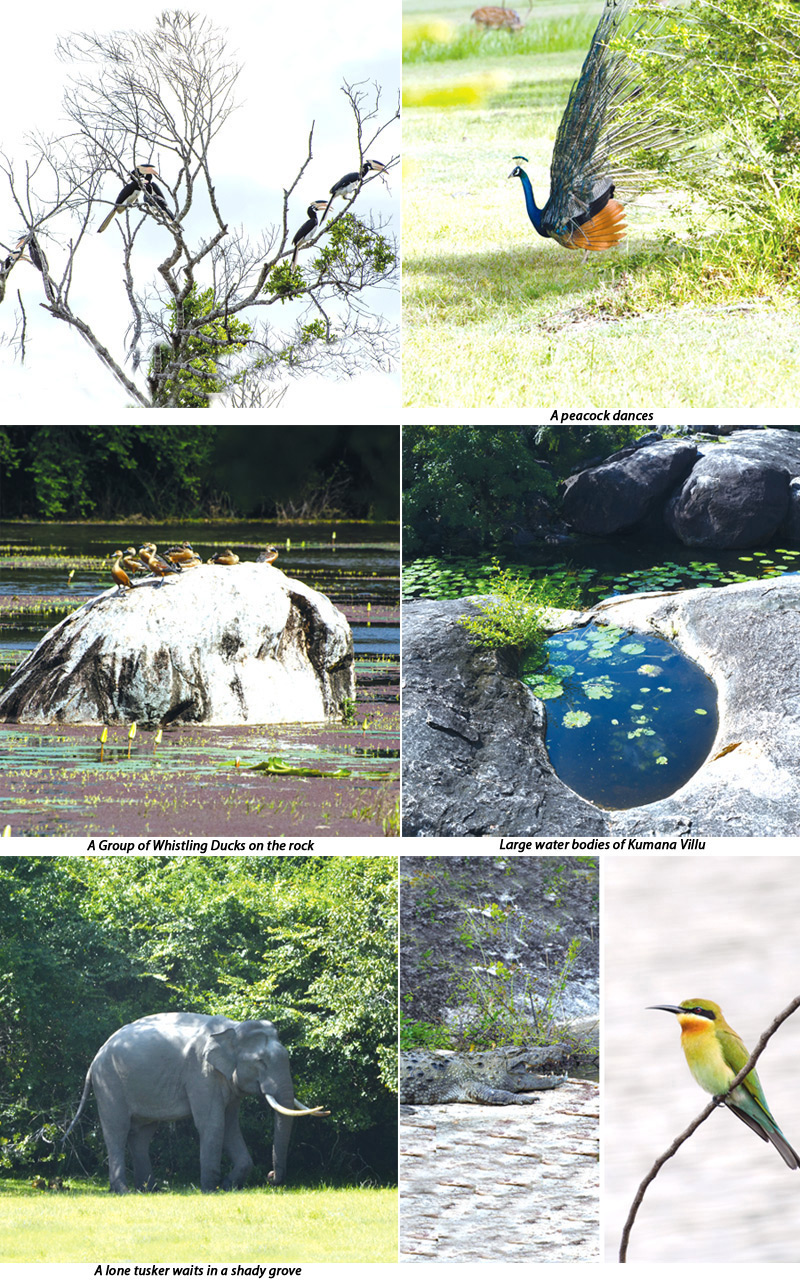 Nestled in the South-East coast of the Eastern Province, 12km from Arugam Bay and spanning an area of 18,149 hectares, the Kumana National Park is well known as an important bird nesting and breeding ground in the country.

Our regular trip to Kumana occurs every year not really during the ‘season’. This time, however, the visit was not only to see the animals, but also to venture along untrodden tracks to discover hidden wonders of the ancient civilisation dotted here and there in the jungle. However, last year, we couldn’t visit the park due to the Covid-19 pandemic. 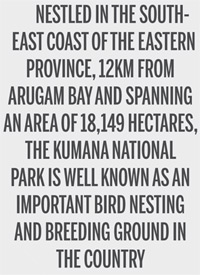 In the previous trips, we visited several ancient places, but left out a few sites which were inaccessible due to damaged tracks in the park. This time, we intended to see many of the sites that were left out previously. Every time we went into the jungles, we stayed in the park bungalows. But this time, we decided to put up at a campsite as it was more adventurous and chose the Galamuna campsite to spend the night. During our two-day visit, we planned to see a few archaeological sites and spend a few hours in Kumbukkan Oya.

As usual, we entered the Kumana National Park with our guide. We passed the Yoda Lipa and drove further into the jungle. From the well-trodden road, we turned into a side path. The recent rains had washed away the roads, leaving large dips and dives. The jeep skid and slid as we entered the muddy plain.

We did not spot many animals except a couple of hawk eagles on the dried up trees, may be because it was late morning. We had travelled for nearly one hour when our jeep stopped and our guide got down. We had apparently arrival at Kiripokunahela, the first site on our itinerary.

We kept our food parcels under the seats of the jeep and closed the doors, as we had been warned that food left outside would be a happy feast for the monkeys.

There was a footpath leading to a rocky outcrop across the muddy plain, with a massive rock boulder looming over us.

We climbed over the boulder and stepped into the cave. The floor was smooth, perhaps due to sloth bears or leopards seeking refuge in the caves.

After an hour’s drive across the plains, lagoons and mangrove swamps, we arrived at Bambaragastalawa, a massive rocky boulder with drip-ledged cave.

There was a footpath leading up to the small hillock. Overgrown with green shrubs and with rocks as footholds, we climbed up and passing a thick brick wall, entered a large open cave where we found a resplendent reclining Buddha statue.

At Galamuna, one can see a set of huge stones laid across the Kumbukkan Oya. It is said, in ancient times, the villagers of Kumana diverted the waters of the Kumbukkan Oya to irrigate their paddy fields.

The stone dam across the Oya is still visible in Galamuna where the Wildlife Department has set up a campsite for visitors to the park.

On the way to Galamuna, we observed the Kumana village through the Kumana Villu which was dried up due to drought. Nothing much remained of the village except for coconut trees.

The second day we dedicated to see the animals. We first visited the most revered Kuda Kebilitta Devala, lying on the banks of the Kumbukkan Oya.

A small shrine had been built for God Kataragama. The shrine lay without the Kapurala (custodian). We worshipped for blessings and a safe journey. Most visitors to Kumana spend a little time here to get divine blessings from God Kataragama while they tour Kumana.

Kumana is also well known for its wildlife and migratory birds. As we returned to the road it seemed as if the jungle had finally awoken on our second day.

Herds of wild buffaloes dipped in the lagoons, deer seemed to be everywhere, and lonely elephant sprayed water in the water holes. Suddenly, we spotted a crocodile basking in the sun, which retreated quickly into the water on our approach.

We were fortunate to see a rare Black Necked Stork and Painted Storks, Whistling Ducks, Egrets, Godwits, Pelicans, Ibis and many more in their great numbers, creating a picturesque setting.

The Green Bee Eaters were flying everywhere, while Malabar pie hornbills sang rhythmically as they moved from branch to branch on dead branches of the tree tops.

Our attention was suddenly drawn to a massive tusker, which one of our members had spotted and shouted to us to halt. Although we have visited National Parks several times before, it is the first time that we spotted such a big tasker. Though Kumana bears and leopards evaded us, we were happy that we had been able to see many animals during our journey.

As dusk began to fall, we reached the gates, barely making it before the closing time of six along with some fellow nature lovers to bid adieu for yet another exciting adventure.