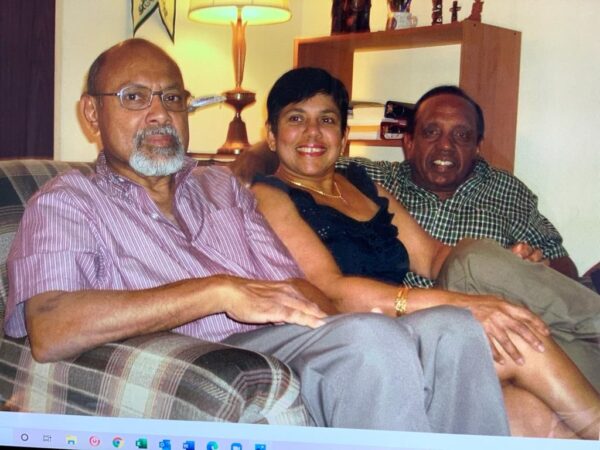 As cousins we were very close with dear Leslie. We virtually grew up together and spent our childhood and growing up years in close kinship.  Leslie was a frequent visitor to our ancestral home at Bullers Lane where we enjoyed fellowship and loads of fun. He was always a very welcome visitor and much loved by the family.

Leslie and his two sisters would invariably join the Gomez’s during the April holidays on their sojourn to Bandarawela and Haputale during the school holidays and one can only recollect the rollicking time this ‘dirty dozen’ plus one enjoyed together, although every evening Leslie’s mother insisted that we recite the Holy Rosary together as one big family, after all the energy and adrenaline had been spent on outdoor activities during the day.
After enjoying a fruitful and rewarding rugby career at St. Peters, with some robust scrumaging and fearless line-out play, when he played with and against, some of the most outstanding schoolboy rugby players of the 60’s era, several of whom went on to represent their country, he had to give up the sport when he found employment.

However, Leslie’s career took off when he joined a company with a bit of help from his cousins, some of whom who were already employed at the company’s factory. Freed from the shackles that impeded his youthful progress, Leslie’s talents and skills simply exploded and he displayed qualities that we had rarely seen from him before. He became a big hit with all his work mates because he always carried a big smile, was very kind and ever ready to help his peers when the occasion demanded so. His pleasant and friendly disposition, work ethic and team spirit was well recognized and rewarded by management and his colleagues. He never shirked his responsibility and very willingly did a double shift, (even if it was the ‘graveyard’ shift) whenever his replacement was sick and unable to report for work.

At CPS, Leslie joined a carefree group of friends consisting of Ajith, Russell, Jannice, Sally and Placi, Dennis and Jayantha – all sharing the same interests, by judiciously using the much longed for mid-week Poya holiday for a day outing at Bentota. Since no one in the group had the privilege of owning ‘wheels’ they travelled together by train joining up at their respective railway stations armed with guitar, the brew that ‘cheers’ and swimming gear.

They pitched tent at one of the public summer huts to start a day of undiluted fun and frolic, singing, swimming in the sea and of course enjoying the ‘brew’ that keeps one in such high spirits. Having already made a prior booking at one of the hotels for the buffet lunch they interrupted proceedings to enjoy the sumptuous buffet spread before heading back to their summer hut to continue their revelry. Leslie who like his pal Ajith, had a ravenous appetite and after doing justice to the ‘all you can eat’ buffet, would carefully pack and bring back loads of sweet meats, cakes, etc which formed part of the buffet dessert and which he said was his evening tea diet, but which he gladly shared with the group. This routine was the norm every mid-week Poya holiday, until some of the friends migrated Down Under, and brings back lots of fond memories.

Leslie continued to be a frequent visitor to many of our homes even after our respective marriages. The sound of his motor bike alerted us that Leslie had arrived.  He simply loved to go on outdoor expeditions especially the many visits to the Island on Bolgoda, sea side resorts and upcountry holidays mainly with his close circle of friends and associates. He moved into a little annex in Nawala until his marriage, when he shifted to his wife’s home.
Eventually Leslie too left our shores to migrate to Canada with his wife Nilanthi and lived there until his sudden and sad demise in April 2021.

Leslie, you are sadly missed by all of us, but you have left us with so many treasured and cherished memories of the happy and wonderful times we spent together.  Though you left us without a proper farewell, you will always remain dear in our hearts. Good bye dear friend & cousin and may you receive your eternal reward from the Almighty.
‘Amigos para Siempre’
Placidus Gomez