The Technopolitics of Dissent in Sri Lanka – By Shakthi De Silva 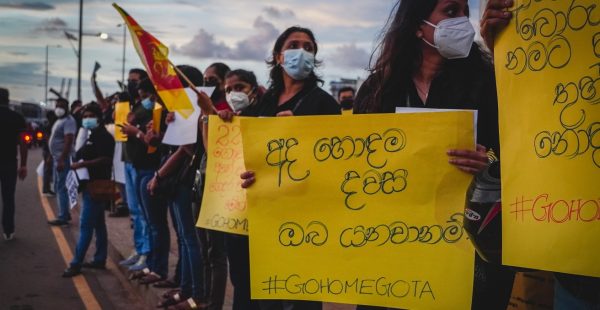 Observers in Australia and elsewhere have covered Sri Lanka’s ongoing protests and accurately teased out the nuances of the situation. However, many underestimate how technology played a key role in instigating this organic social uprising.

Web platforms and social media has revolutionised the politics of public dissent. They give new meaning to free expression and empower citizen journalism and activism to take a life of its own outside the traditional domains of private or state-influenced media. Information is now coproduced by people and shared on WhatsApp, Facebook, Twitter, Instagram, Tiktok, and more. Representative democracies around the world are feeling the pinch as stories, pictures, and posts on corruption and political malpractice become viral sensations. In more ways than one, this has become a feature of the modern-day democratic techno-politic climate we live in. Nowhere is this more evident than on the streets of Sri Lanka.

Since the island graduated to middle-income status in 1997, acquiring concessional loans from bilateral donors and multilateral agencies became a challenge. As a result, policymakers borrowed from foreign capital markets by issuing International Sovereign Bonds (ISB). Commercial borrowings of this nature, which accounted for around 2.5 percent of foreign debt in 2004, swelled to 56 percent by 2019.

In addition, persistent budget deficits, a reluctance to widen the tax net, and an inability to diversify Sri Lanka’s export basket left the island unable to generate sufficient revenue to finance ISB repayments. Consequently, policymakers dipped into Sri Lanka’s foreign reserves to meet debt obligations. Compounding these problems was the COVID-19 pandemic, which caused a decrease in remittances from migrant workers and a slowdown in international tourism. The island no longer had sufficient foreign earnings to finance its debt, and by 2022, Sri Lanka’s economy was spiraling into default. The result was soaring inflation and regular power outages, coupled with a lack of fuel and basic essentials, which induced many to protest against the president and demand his resignation.

In the face of an intransigent president, Sri Lankans have developed novel ways to express their dissent. The organic movement began with the hashtag #GoHomeGota2022 (Gota is a truncated term for Gotabaya Rajapakse, the president of Sri Lanka) on the world’s digital town squares, Facebook and Twitter. This eventually morphed into a fully-fledged website for protestors to share their pictures, videos, and commentaries. Some logged in to the Wikipedia accounts of the president and prime minister, defacing their names and disfiguring content. Others repeated the #GoHomeGota2022 hashtag in their posts, with the intention of reaching the 2 million trending mark.

A novel development that sprang during this time was the use of Google’s Review function to send negative reviews of a coffee shop purported to belong to the Rajapakse family. Within a few hours, over a thousand one-star reviews streamed in with people criticising the Rajapakses, prompting the shop to deactivate its location on Google Maps. Protestors then moved to the shop’s Facebook page, vilifying the establishment with one star ratings and posts such as “This place was built by a gang of thieves who shamelessly stole the hard earned money of innocent people” and “A cafe run by thieves with stolen money from the general public! Please avoid this place at all costs!”

As the protests escalated, the Sri Lankan government responded by imposing a nationwide social media blackout. This was immediately derided as an act of cowardice by protestors and subverted with the use of virtual private networks (VPN). As a consequence of VPN use, the hashtag #GoHomeGota2022 became a trending topic on Twitter in locations as distant as Singapore, the USA, Canada, and the United Kingdom. Moreover, the state minister for digital technology normalised the use of VPN to circumvent the blackout imposed by his own uncle – President Gotabaya, who acts as the cabinet minister of technology.

Another new technopolitic development has been the open invitation issued by many Sri Lankans for the Anonymous Group to be involved in the movement against the government. Anonymous is a decentralised international hacktivist collective known for its cyberattacks against governments and private institutions. In response to appeals on social media, the group launched “OpSriLanka” targeting government digital infrastructure and public databases. While it remains to be seen whether Anonymous can fulfil the public’s hope of exposing alleged embezzled Rajapakse bank accounts, the group’s involvement in the political turmoil at the behest of social media requests is a novel development in Asia.

In sum, Sri Lanka’s protest movement demonstrates how technology is being instrumentalised as a tool to display dissent, frustration, and anger. Technopolitics is here to stay, as a younger, more tech-savvy generation demands accountability and good governance from their elected officials. The trends we witness today in Sri Lanka is reflective of what may transpire in other Asian capitals if leaders are unaware of the potency of technology and the necessity of maintaining a pulse on social media platforms.