THE ROYAL HOCKEY FAMILY OF MATALE AND CEYLON/ 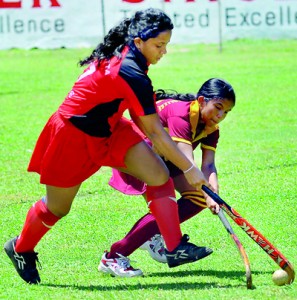 It is with nostalgia and deep appreciation that I venture to pen a few words on a great and wonderful couple, Angunawela David Wijekoon and his beloved wife, Aluvihare Punchi Kumaryhamy.

It is during the 2nd Nationals held in Matale that Herbert invited me to meet his parents. With outstretched hands, he welcomed me saying ‘come putha, come’.  This warm welcome greeted me over many decades whenever I went to Matale as a player, umpire or official.  Theirs was an open home, the pot on the boil all the time.  Nobody left without a meal.

A prominent planter he was, sipping a brandy and having a long chat, was an experience itself.  I looked forward to these visits as it gave me much joy.  Here was a very simple and humane couple who sired 6 boys and 2 girls who as it were, were born with hockey sticks in their hands.

For over 2 decades six Wijekoons represented Ceylon/Sri Lanka in National and International matches both at home and abroad.

I have played with Herbert and Douglas at home and on tours abroad, and Ranjith, at home. They were fearless forwards and never took a step back when facing the might of the awesome Punjab backs, when India was the No. 1 Nation in the world, as well as the Pakistanis who were No. 2.

Richard the eldest captained Wijeya College and followed his father’s footsteps as a young boy.

Ranjit was the only Sri Lankan to be selected for the Asian Contingent after the 1962 and 1966 Asian Games.  Surely, he must be the best ever player in the annals of Ceylon/Sri Lankan Hockey.  He was a dazzling Right Inside and mesmerized his opponents with deft stick work and body swerves.

Played for Matale at Nationals, ‘A’ Division club and for Mackwood Industries in Mercantile ‘A’ Division tournaments.

International at both Hockey and Netball.

All the Wijekoons captained the College teams, Richard at Wijeya College, and the others at St. Thomas’ College, Matale, and the girls at Baptist Mission School.

If have missed anything it was not for want for trying.

This tribute brings back very fond memories of a very great ‘old couple’.