The Rajeewa Jayaweera I Knew 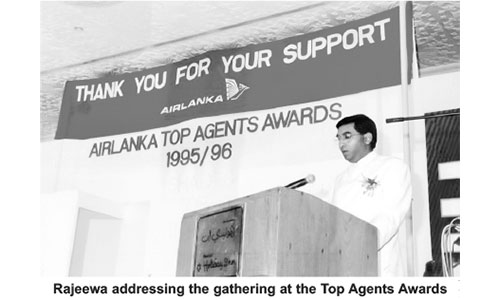 For a fleeting period, Air Lanka (before its change to SriLankan) lit up the Oman sky, but it was all too brief, as was the life of the initiator of this success. We commemorate the first death anniversary of Rajeewa Jayaweera and recall with pride the achievements of this dynamic individual who left a significant imprint of Sri Lanka’s landscape among those living in the gulf states.

As a journalist my association with Rajeewa spanned over a decade in the nineties. He was a “stoic and principled” administrator who was forthright and considered in his views. As Manager of the Sri Lankan airline in Oman, he delivered exceptional service not only to our community in many ways over the period of his tenure, but also to those Gulf travelers visiting our island. I was amazed at his dedication, determination and discipline; he did not waver in his search for perfection.

When Rajeewa arrived in Oman in the second half of the nineties, Sri Lanka’s National airline was in the doldrums and was considered “just another airline” competing for a share of the Gulf’s travel market catering mainly to the Lankan workforce. Rajeewa’s vision was different, his desire was to raise the standard of the airline to be on par with the best, but he had to contend with the bureaucrats in Colombo. He faced up to the challenge. Not afraid to speak his mind and to take a firm position on issues that were

important to him and the airline, his persistence to enhance the image of the airline succeeded, commencing with the shifting of the airline’s office premises after 13 long years to a prestigious and prominent location. The airline’s logo was displayed for all to see.

This was followed by familiarisation tours to our Emerald Isle for foreign journalists and travel agents and Rajeewa accompanied them as tour guide, mesmerizing reporters with his in-depth knowledge of Sri Lanka’s history and attractions to leave them in awe.  Rajeewa was a true ambassador for the country and its airline, just like his late father, Stanley Jayaweera, a career diplomat of repute. In 1997, to coincide with 50-years of Sri Lanka’s Independence, Rajeewa hosted Air Lanka’s first-ever glamorous “Top Agents Awards” ceremony at the Muscat Holiday Inn.  The invitees were treated to an extravaganza of what Sri Lanka had to offer interspersed with a cultural show, traditional dancing, and authentic Sri Lankan cuisine courtesy of Jetwing’s finest chefs.  Rajeewa’s positive charm instantly propelled the

airline into the limelight, winning hearts and minds of the Gulf’s expatriate community resulting in Air Lanka becoming the preferred carrier of choice for their holidays. As a disciplinarian he may not have endeared himself to many, but he stood tall with his direct and “no nonsense” approach which provided the basis for the airline’s success in the Sultanate.

After completing his term in Oman, Rajeewa was transferred to Madras and then Paris continuing his drive in these two cities to improve the image of Sri Lanka’s national airline.

In later years Rajeewa bemoaned the plight of Sri Lanka’s national airline and mismanagement.  He had a fierce loyalty for the airline and represented his country with pride and would have been an ideal member to serve on the SriLankan Airlines board with his vision and experience. Unfortunately, those with vested interests thought otherwise and the island nation’s loss was Qatar Airways gain. Those who associated closely with Rajeewa will remember him as a strict disciplinarian with a strong work ethic and an abundance of skill. He was an outstanding role model for young people in particular. He was a beautiful, kind and much-loved friend. We are sad beyond words and extend our deepest condolences to Rajeewa’s family.