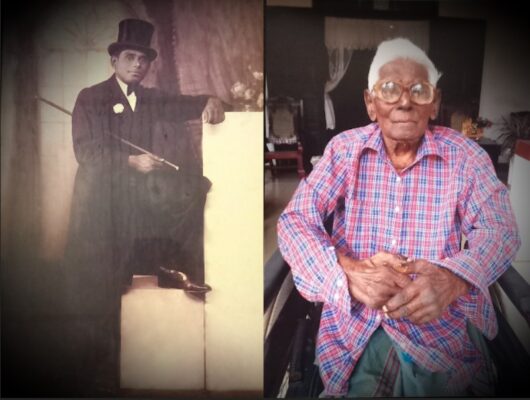 A few weeks ago, we received a phone call from our dear friend Ainslie Joseph, who had some interesting information for us. The Messenger, the official organ of the Catholic Church in Colombo, had carried a rather important birthday anniversary notice of one gentleman who was to turn 103! The notice had clearly mentioned that he is an Old Boy of St. Joseph’s College.  We realized that this gentleman, perhaps is the oldest living Josephian, for, in our circles here and overseas, we have not come across any Josephian who was a centenarian. After finding his contact details, we got in touch with his youngest son and were invited to his house in Kochchikade, off Negombo, 50km North of Colombo. Despite the country’s severe fuel crisis during this time, we realized we should, by all means, take a chance, with some help from public transport, to visit 103-year-old, Basil Siriwardane.

When we visited   him, we realized that all his children were at home that day, waiting to relate to us some incredible stories of their father. Basil Siriwardane himself had a special story to tell us. From all that we learned on that eventful day, we thought the readers will be enticed by his story, which no one else could relate to today. Basil was born on August 3, 1919, in the strongly Catholic city of Kotahena to Mohandiram Henry David Perera Siriwardane, who worked for the Police Department, and Agnes Perera Abayasekara, who hailed from the Kahāwita Walauva in Kandy. Though the Siriwardane family had 13 children, only 6 survived childhood. Basil and his family lived in ‘Siriwardane Walauwwa’ in Skinner’s Road, Kotahena. His father owned another house called ‘Tsu-Shima’ at Dickman’s Road, Bambalapitiya.

After receiving his early education from St. Benedict’s College, which was nearly a hop, step and a jump from home, young Basil joined the portals of St. Joseph’s College in 1930. This perhaps as many would agree, was the ‘Golden Era’ of the College, at the height of the Rectorship of the esteemed, Fr. Maurice Le Goc OMI. He recalls the personal memory of this celebrated priest with reverence. Basil remarked that all students looked upon Fr. Le Goc with immense respect, for they knew he was one of the most accomplished men in the country,  yet so humble. He did not forget the child-like simplicity of this revered priest and his nickname for all students, “Sonnie”. The guidance of stalwarts as the then vice-rector Fr. D. J. Anthony, Messrs. Eric Mendis, Paul de Rosayro, Andrew Weerasekera, George Tillekeratne, J.P. De Fonseka is gratefully mentioned in the process.

84 years ago, Mr. Basil Stephen Perera Siriwardane left St. Joseph’s College having completed his college education. He laced his academic prowess with sporting exuberance being a senior cadet and a weightlifter. Weightlifting remained a passion with him and culminated in his competing for Mr. Ceylon a few years later. Sports seem to have been a family strain, for his maternal cousin Fr. Gerry Abayasekara, would later go on to be a renowned Prefect-of-Games at St. Joseph’s. Some of his maternal uncles, who initially studied in Trinity College, Kandy joined the newly established St. Joseph’s College, Colombo in 1896 upon the request of Msgr. Clement Pagnani OSB, the Bishop of Kandy.

His memory at 103 years of age remains astonishingly vivid. More so when reminiscing about “the good old days”. A trip down memory lane brings up old friendships with the likes of Ralph Rutnam, Donald Wijeyeratne (who founded the famed Donald’s Photography studio in 1942), Cyril Gardiner (later chairman of Galle Face Hotel), the famed pole-vaulting Arthur (later senior DIG of Police) and Fr. Vincent Dep, as well as the famous De Mel brothers, Royce (later Rear Admiral) and Maurice (later Colonel). Another contemporary was Amaratunga Arachige Maurice Dias who would later rise to local and international fame as Deshamanya Chitrasena for establishing a modern Sri Lankan tradition of dance. All these men are noteworthy characters in their spheres of life and it’s a solemn thought that this centurion is the last mortal upon this planet to have shared in the carefree past of those glorious childhood days. The grand old man recalls the wholesome mentorship of Fr. Justin Perera and Mr. Anthony Abeysinghe, the legendary Josephian Athletics master-in-charge.

Regaling us with the stories of a time long gone by, the fondest memories are clearly those of the cadeting days when he ruled the roost alongside the De Mel brothers. Peering through the centenarian’s eyes is a teenager who was excited with the prospect of a train journey to Bandarawela in the company of his mates, then crestfallen when realizing that a trek on foot to Diyathalawa was next on agenda in a bracing uphill atmosphere. A cadet camp would last for 40 days customarily. He remembers that the young boys were surprisingly well fed with ‘lamb chops’ being a favourite.

A letter of recommendation for Basil by
Fr. Peter Pillai OMI

Holed up in the hills far away from home for 6 weeks seems to have brought out an adventurous spirit within the teenagers. With a bottle of whiskey being priced at just four rupees, the boys seem to have returned home having acquired a taste for “the good stuff”! These shenanigans always took place in after dusk with the military personnel turning a blind eye to the teens’ antics. Our storyteller recalls with a fond chuckle a “Captain Pavey” (George Pavey) who was rumoured to have dismissively replied “boys will be boys” when a concerned sergeant had raised the issue of the boys’ not-so-secret indulgence!

Upon leaving college the youthful Basil Siriwardane joined the Food Department.  This was during the days of the British Occupation. Later he joined the Department of Agrarian Services and after a stellar career there linked up with the Colombo Fort Commission. He discharged his duties aplomb before going into a gracious retirement. Basil married Therese Gennielin Siriwardane on December 28, 1955, and later resided in Kochchikade, Negombo. The marriage which lasted over 50 years produced two sons and four daughters. Basil lost his wife, whom he dearly loved, some fifteen years ago.

His son Royce, when inquired into the reason of his father’s (Basil) longevity, purses his lips and engages in contemplation, before musing aloud that it likely relates to lifestyle. According to him a faint childhood memory lingers of seeing his father consume sufficient proteins in the form of four eggs a day(!) and cycling even in his eighties, and nineties.

Before we bid adieu to Basil, we gifted him with a copy of Till The Mountains Disappear: The Story of St. Joseph’s College.  Basil was emotional after seeing the images of the glorious bygone days. His days. It revived his memory. The story of Basil is one of a kind, only a 103-year-old could relate.