The inseparables in white 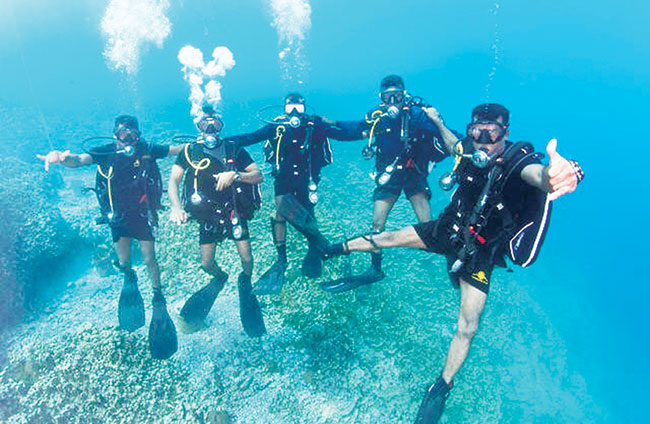 Navy and Custom officers wear white uniforms. The relationship between the two old services are also unique. When we seize contraband smuggled by sea routes, we hand it to the Customs for public auction. We get a part of the revenue to government earns, as ‘catch money’ in appreciation of our good work.

Sometimes, in bigger raids conducted on intelligence/information received by the Customs, we help the Customs officers happily as we know our names are also included in ‘catch money list’. 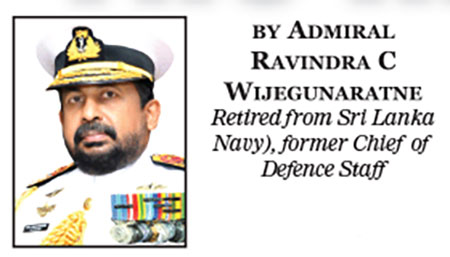 Most of the senior Customs officers have sweet memories of their first posting at Talaimannar. Even though defunct today, Talaimannar was a busy landing point when the India- Sri Lanka railway connection was there through the ferry named Ramnujam.

Young Customs officers, especially new cadets had to serve in Talaimannar obviously because of rough living conditions there. However, I am yet to meet a Customs officer who complains of harsh conditions there. They all had happy and an enjoyable posting at Talaimannar, and their stay there stood them in good stead where promotions were concerned.

An interesting chapter on the Naval Detachment at Talaimannar is found in ‘Spit and Polish’ by Kalakeerthi Carl Muller, our own award-winning writer and poet—he was in the Royal Ceylon and Sri Lanka Navy for very long time serving in our Communications branch.

By the time we joined the Navy in 1980, the naval detachment had been withdrawn from Talaimannar; the Ramnujam ferry had stopped operating. The SL Customs locked their properties and moved its officers to Colombo.

On 19 March 1985, while I was serving as the OIC of Naval Detachment Nagadeepa, I received a message asking me to report to CO of our main base SLNS Elara, in Karainagar. I was a young Sub Lieutenant. I wondered what wrong I had committed. As far as I knew the Chief Incumbent of Nagadeepa Purana Raja Maha Viharaya, Most Ven. Rajakeeya Panditha Brhammanawatte Dhammaketti Tissa Thera had highly recommended me. If so, why was that call?

When I met CO Elara, he explained, “Ravi, as you have established the Nagadeepa detachment so well, I can run it with some other officer. Further, I can always visit there at short time. I want to give you a bigger task. 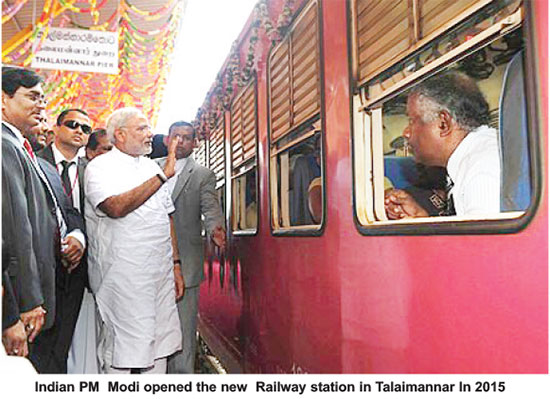 “The Navy Headquarters wants us to set up a detachment at Talaimannar at the request of the army. It is a different terrain with different living conditions. I want you to be the OIC of this new Naval Detachment in Talaimannar. The Army will provide you with food, etc. I will give you 16 sailors and one senior sailor. The gunboat of Lt Commander S G Weerasinghe is ready to take you to Talaimannar.”

That’s how the Navy re-established its detachment at Talaimannar !

Thanks to the Army, I received two brand new boats fitted with two 40 HP outboard mortars. I shifted to the Customs housing Complex in Talaimannar

We settled down to work immediately. Anticipating the next Rugby football season and with the intention of playing a full season for the Navy team without any injuries, I started long beach runs early in the morning and weight training at my personal gym in the evening. Fresh fish, shell fish and dry fish were plenty, thanks to the Army, we dined well. On Sunday, we had two glasses of thal toddy. The area was full of wild pigs.

At nights we laid our ambushes at sand banks, discreetly reaching in our boats like fishermen and awaited for boats loaded with smuggling goods to pass by. Soon our stores were filled with sarees, sarongs, bundles of other clothes, zippers, etc., all smuggled from India. There were also video decks, television sets, other electronic goods, toilet soap and laundry soap caught while being smuggled to India. The more sleepless nights you spent on the sand banks of

Talaimannar/Danuskodi area, the more smugglers you caught. The contraband, the boats used to smuggle them, outboard engines, etc., were confiscated and sold in public auction in Colombo by the Customs.

Catch money? Yes, the Customs were very efficient in getting us the catch money which we were entitled to as per Customs Ordinance. I thanked my CO SLNS Elara profusely for that enjoyable and well-paid job of catching smugglers.

Smugglers, however, were smart and did their best to avoid us, but we had our informants, who got their share of our catch money. So, the smuggler had their work cut out.

How much I earned as catch money

(Please, do not ask me the amounts I received. I don’t want to make you green with envy. All I can say is that the amount was huge.)

As the OIC of Naval Detachment Talaimannar during this eventful 15 months of my junior naval career, I became very rich! However, money was not that important for us at that age. What really mattered to us was the pleasure of catching smugglers. It was not only with informants that shared my money; I was the only one with a job among my classmates at the time. So, I incurred heavy expenses while on leave, especially during the rugby season, in Colombo.

This small detachment which Navy restarted in 1985, became a Commissioned Naval base (SLNS Thammena) in 1996. I was fortunate enough to Command it in 1997/8 as a Commander, and today it’s the Headquarters of North Central Naval Command Commanded by a senior officer of rank of Rear Admiral. I firmly believe in SBS motto, Fortune favours the brave.

Oldest Customs Ordinance in the world

You may be aware that the first Customs Ordinance in the world was established by a Sri Lankan King. It is the stone tablet inscription by King Gajabahu (114 to 136 AD) at the ancient Godawaya harbour near the Walawe estuary close to Hambantota; it carries an order that all dues from ships be donated to the Godawaya temple for its maintenance. 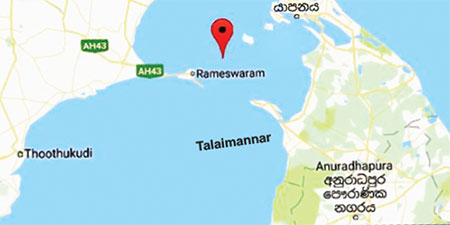 This ancient harbour functioned from 2nd Century AD to 12th Century AD on the ancient maritime Silk Route. A replica of this historical stone tablet is on display at the new SL Customs Museum in their Headquarters, Colombo.

In 2008, when I was the Commander Southern Naval Area, with a view to helping the newly formed Maritime Archeology unit of Archaeological department, I loaned to the Maritime Archaeology Unit in Galle, one of the Navy’s most qualified diving officers––Lt. Commander (then) H N S Perera, who received training in the US and China in salvage diving and served at the Royal Malaysian Diving School as a diving and salvage instructor. One of his missions was to find a wreck of very old (Anuradhapura Period) ship two miles off the Godawaya ancient port at a depth of 100 feet. The divers used SCUBA sets, which carry normal air. It is always advisable to use Helium-Oxygen mixture diving sets as SCUBA sets can be used only up to a depth of 90 metres.

HNS with two civilian Marine Archaeologists went in a civilian fishing boat on 21 October 2008 afternoon. The boat stopped where the wreck was supposed to be 100 feet below, and into the water they jumped without a lifeline from the boat or a surface supervisor, who is supposed to hold the boat at end of life line. Our divers traced the wreck. It was a invaluable finding for our Nation’s Maritime Archaeology!

The divers found an ancient pot. When they surfaced after proper decompression stops in various depths to avoid ‘bends’, the boat was missing. 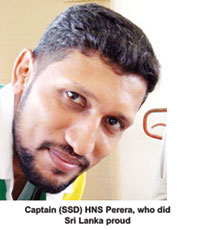 The boat had drifted away due to rough seas as the operator was an untrained civilian; he had not dropped the anchor, and therefore could not trace the divers.

HNS took command over two other divers. They ditched their diving equipment and started floating with the help of their inflated emergency life vests.

The emergency SOS was sent out. We deployed all available boats to rescue the divers. The Air Force helped us by sending a Bell 212 from Ratmalana.

Luckily, we were able to detect HNS and two other divers few minutes before Sunset and brought them safely ashore. They had held on to the priceless artifact (clay pot), knowing its archaeological value. Later, we found with the help of carbon dating (C- 14 dating test) that the pot belonged to 2nd Century AD.

HNS was very lucky. We would have lost him and others on that day. Whenever we meet, he always mentions this incident and thank me for the prompt SOS operation. So, our Customs have long history and been on the ancient Silk Route and later international shipping network hub; they have earned the major potion of the state revenue.

Today, we hear much about shipping laws and compensations for ship wrecks. Some of the ‘experts’ who take part in television interviews on the subject do not know what they are talking about, much less our maritime history.

We are a maritime nation. Our forefathers came by sea. But, sadly, we do not know our sea well.

King Parakramabahu I, (1123 to 1186 AD) wrote on a stone tablet how ships that got wrecked should pay dues to ancient port, Urattuturi (port of Kyts), as per their cargo. This tablet is now at the Nayanativu Naga Poosan Amman Koviil Museum. Thousands of years ago we had laws pertaining to compensation from those who owned the ships that sank near our ports. Today, we hire foreign legal consultants over such matters!

As per Annual Performance Report of Sri Lanka Customs 2018, former SL Customs Director General, Mrs P. S. M. Charles has said in her message, “During the year under review, (2018) SL Customs were able to secure tax revenue of Rs. 919.05 billion. This is 53.7% of total tax revenue of the government.

I will be failing in my duty if I do not mentioned Ravi junior for his diligent research work in to historical details.