The Governors at Nattandiya – by GEORGE BRAINE

Opposite the Nattandiya railway station, between the Buddhist temple and the Milk Board collection center, is a narrow road that winds down out of sight. I believe it used to be called the Gansabawa Road. In 1960, my father served as the superintendent of a coconut estate on this road about a mile from the station.

Ratmalwewa Estate wasn’t large – it must have been around 150 acres during those days – and it was split into two by the road. For a child growing up in rural Ceylon, the estate and the life surrounding it were memorable.

Not much traffic passed down the road. There was no bus service and cars were infrequent. Lorries loaded with coconuts or coconut husks, transporting them from estates down the road to oil or coir mills further afield, passed occasionally. The most frequent sight were bullock carts carrying raw coconuts or thatch, their slow clop clop interrupted by carters’ occasional shouts, urging the bulls to hurry along.

We lived in a large whitewashed bungalow a few yards from the road. The roof was thatch, the thick walls were of clay, and there was no electricity or water service. A long, uncovered verandah faced the road, and to a side was father’s office. The sooty kitchen was a separate structure parallel to the house, connected by a corridor, forming a sort of meda midula (courtyard) where my brother Roy and I played frequently.

Because the roof was low and thatched, the house was in semi-darkness all day. But it was also cool, a welcome relief from the heat of the day. Not that we ever complained about the weather, except when it rained and we were not allowed to play outside. By about six o’clock every evening, the lamps were lit. In the living room, the bright Aladdin lamp was suspended in its bracket hung from the roof. Other rooms had smaller lamps, with brass bases and bright chimneys that were soon covered with soot. Insects of all types hovered around the lamps, many falling in to the flame to be scorched.

Dinner was always early. The forbidding darkness loomed from all sides and the little Phillips radio with its music and the news broadcast provided the only distraction. After dinner, the night watchmen (the watchers, as they were called) dropped by for a chat with my father. They would sit in the verandah, the watchers on the steps leading to front yard and father lounging on the hansiputuwa (Dutch style easy chair), and leisurely discuss the events of the day, the local gossip, and life in general. Roy and I listened to the talk, joining in occasionally but mostly absorbing the grown-ups’ ideas and local gossip. Before long, the lamps were extinguished and we were be tucked into bed. 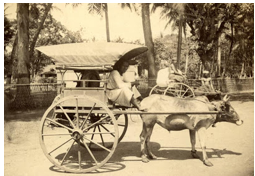 Roy and I studied at Maris Stella College, Negombo, a good twenty plus miles away by train. Every morning, we were taken to the railway station by bullock cart. School began early, around 7.30 am, so we had to leave home with the morning light. Daniel (his name pronounced in the Sinhala manner), the carter, and the bullock cart that took us to the railway station, arrived  early. We climbed sleepily into the cart, dressed in white shirts and blue shorts, carrying small suitcases filled with books and our lunch, and wearing khaki pith hats.

We rode the office train to school. The train started in Chilaw and picked up school children and office workers in Kakkapalliya, Madampe, Kudawewa, and Walahapitiya before it reached Nattandiya. We stood on the curving platform in front of the signal box, where the signalman stood behind a line of vertical levers. We heard the whistle of the steam engine long before we saw it. The sound would also send the signalman into a frenzy, pulling or releasing various controls using all his strength.

The train would glide into the station, pulled by a sooty engine belching smoke. The engine driver leaned out of the cab holding out the “tablet” for the stationmaster, who was dressed smartly in a spotless white suit and cap. We glimpsed the fireman, stripped to the waist and covered in grime and sweat, shoveling coal into the furnace. The train stopped with a huge “whoosh” and a cloud of steam. We always found seats. Leaning out of the carriage to watch the passing scenery, we invariably got coal dust in our eyes.

When we returned to Nattandiya in the afternoon, the cart was waiting at the station. The journey home was always more interesting than the one to the station in the morning. If Daniel was in a good mood, we were given the reins and allowed to drive the cart. The narrow road went over the bund of a village tank, and Roy found the various storks and waterfowl irresistible. He never gave up trying to catch one, jumping off the cart almost every day to chase a bird into the bushes.

In those days, my mother worked at the Negombo hospital and also traveled by train. She returned from work late in the afternoon, so father took me and Roy to the station to meet her. We parked the car – a two-door Morris Minor, EL4251 – across from the railway station, watching engines shunting goods wagons. The engines bore the names of former British Governors such as Sir Edward Barnes, Sir Henry Ward, and Sir Hercules Robinson, if memory serves. On one memorable afternoon, at father’s request, an engine driver, a fellow Burgher, lifted us onto the floor plate.  We peered at the roaring furnace, fed continuously by the hard working fireman.

The weekends were the most interesting. The laborers would line-up on Saturday morning in front of the bungalow for roll-call (“muster”) and to be allocated work for the day. We missed witnessing it on weekdays because we were off at school. Roy and wandred the estate, following groups of laborers and generally making a nuisance of ourselves. I remember a disused gal wala (rock quarry) especially well. It was in the middle of the estate, with a pool of green water at the bottom. Although we were under orders to never enter the quarry alone, we occasionally did so, scattering polecats and monitor lizards as we descended the quarry. Around noon on Saturday, the laborers returned to the bungalow to be paid, lining up for their names to be called. Some were illiterate, placing their thumbprint on the pay sheet instead of a signature.

Sundays began with church. Before father bought the Morris Minor, we went to church by a bullock cart, dressed in our Sunday best. We clop-clopped along the Gamsabawa Road, turned right at the Bo tree on Marawila – Kuliyapitiya Road, cross the Dutch Canal (see photo below) and entered the spacious church grounds on the right. On the way, we saw and often passed other churchgoers in their bullock carts.

Among the churchgoers was the local MP, Sir Albert F. Peiris. I believe he was also the Speaker of Parliament at the time. He came driving his car, and his family occupied the same pew every Sunday. Simple and unassuming, Sir Albert lingered after service for a chat with parishioners. I was awed at his presence. Father always wished him a Good Morning and exchanged a few pleasantries. Not a policeman or security guard was on sight.

The most memorable character at Ratmalwewa Estate was Charlis hewerala, the senior watcher. Charlis, with his glorious handlebar mustache, graying hair tied at the back in a little konde, his sarong half-raised and tucked at knee-level, was a common sight around the bungalow. He was present at muster in the morning, ran various errands for father at all times of the day, and, during his evening rounds, dropped by for a chat. Despite his forbidding appearance, he was a kindly man, patiently answering our endless questions and keeping an eye Roy and me as we explored the estate.

Charlis was the natural leader of the laborers. During Sinhala New Year, when the laborers put-on a musical and dance performance, Charlis sang numerous Nadagam songs from Tower Hall musicals. Seated on mats laid on the ground, lit by a few Petromax lamps, the laborers joined-in as Charlis played the harmonium and sang late into the night while one of his sons pumped away at the other end.

Father served at Ratmalwewa for only a year. The only tangible evidence of our stay there is the farewell group photograph taken at his departure, in which our family and the laborers pose in the front-yard. I sometimes wonder what the estate and the Gansabawa Road looks like now. Although I drive through Nattandiya occasionally, I prefer to live with my memories from the 60’s. The changes may be difficult to accept.