While the world is filled with fear and grief and I am inundated with news of the turmoil in Sri Lanka, my mind turns to a less troubled time when I lived in a garden in the middle of a jungle.

In the mid-1960s, my father was posted as the superintendent of the Isolated Seed Garden (ISG), about 15 miles from Chilaw off the Puttalam road. The ISG, owned by the Coconut Research Institute (CRI) and said to be the first of its kind in the world, had been inaugurated in 1955 by Mr. J.R. Jayawardena, who was the Minister of Agriculture at that time. Its purpose was to carry out cross breeding of high quality coconut varieties.

For this purpose, the 200-acre seed garden, also known as Ambakelle, had been carved out of virgin jungle with a thick band of reserved and protected jungle around it. The assumption was that bees could not fly that far carrying pollen. Beyond the jungle were the chena (slash and burn) cultivations of the villagers. In the jungle lived wild boar, deer, sambhur, monkey, jungle fowl, rock squirrel, and numerous species of snakes, including huge pythons, and birds. Most staff members, “watchers’ (they would now be called security guards) and laborers lived within Ambakelle in housing provided by the CRI. Some laborers who lived in their own homes would walk to work through the jungle, risking their lives when the wild elephants were around.

The wild elephants, when they arrived, provided much excitement. Apparently, Ambakelle lay in the path of the jungle corridor that the famous Deduru Oya herd of elephants had been traversing for perhaps hundreds of years. In the dry season, as the waterholes in their natural habitat in the Wilpattu area dried-up, the elephants numbering in the hundreds had traveled south to the Deduru Oya river in search of water. By the 1960s, the jungles had been cleared for agriculture and human habitation and the elephants were largely confined to Wilpattu.

Nevertheless, old instincts remained and a few stray elephants would do the annual trek to Deduru Oya river, taking their revenge on the human interlopers by destroying their makeshift huts and chena cultivations. These elephants would raid Ambakelle because they relished the young coconut seedlings. Years of painstaking research could be destroyed overnight.

Of course, shooting the elephants was out of the question. So an electric fence consisting of a thin wire connected to electric horns and 6-volt car batteries was erected right round the perimeter of Ambakelle. The wire would be activated in the evening and when 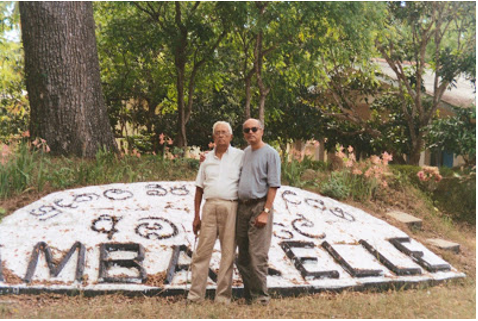 On a trip to Ambakelle in 2005 with my father Teddy

it was tripped, usually by an elephant, the nearest horn would sound, thereby warning the patrolling “barrier” watchers. The watchers were the first line of defense and would attempt to scare the elephant off by lighting firecrackers. My father would soon be on the spot by jeep, and, with the help of the watchers, the loud jeep horn, firecrackers, yells and hoots, drive the elephants back into the jungle. We had little sleep at night when the elephant season was on.

Ambakelle was a “hardship station” and the CRI did its best to make life a little easier for its staff. The housing (“bungalows” for the staff officers) were new, and electricity as provided from 6 to 11pm by a large, diesel operated Lister generator. A central tank supplied running water. A circuit bungalow was available for visiting staff. The first superintendent, Bertie Rodrigo, a naturalist, had designed the layout well, preserving a few massive tress and a couple of ancient water holes.

But, life in the middle of the jungle was boring: there was no TV those days, nor did Ambakelle have a telephone, and our only means of entertainment was a Grundig radio and an old, hand-cranked gramophone. Every week, we looked forward to another episode of “Muwanpelessa”, a popular radio play, which ironically was based on a village in the jungle. The nearest town was Chilaw, a good 15 miles away. Occasionally, we would drive there to watch a movie but returning home through the jungle at night was risky, especially when a feared lone bull elephant (“Thaniya”) was around. So the tractor driver Thomas would wait just outside the jungle and drive the tractor ahead of our Peugeot 203, making as much noise as possible by accelerating the tractor engine.

Wild elephants were not the only threat. In fact, the surrounding jungle, being the only source of meat and timber for miles around, was under siege. Hunters would roam the jungle, poaching the deer and wild boar and sometimes setting deadly trap guns. These crude, illegal, home-made pipe guns, packed with gun powder and pieces of metal, were tied to tree trunks at ground level, and a camouflaged trip wire (“maruwela”) strung across animal trails. Occasionally, the victims were other hunters, who were severely injured, needing amputations if not suffering an agonizing death.

The villagers would also enter the jungle to cut down trees, so watchers had to be hired to patrol the jungle. Once, when I accompanied my father in the jeep, with an armed watcher riding at the back, we came across a bullock cart filled with illegally cut timber. My father ordered the thief to take the cart to Ambakelle and unload the timber himself. Another time, my father discovered that another staff member had cut down a large number of valuable “burutha” (satinwood) and “palu” (ironwood) trees and sawn the timber into planks. The planks were stored in his quarters waiting to be taken out of Ambakelle at a convenient time. The staff member was later dismissed from his job.

I was schooling at Chilaw at this time and would bicycle through the jungle to catch a bus. When the wild elephants arrived – we could tell from the telltale broken branches and droppings – my father drove me to the bus. He sometimes brought his shotgun because the jungle fowl were good for the pot. Once, we didn’t know that the elephants had arrived, and as I bicycled past, I heard a loud, angry grunt from the jungle. 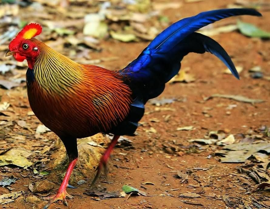 My first task early in the morning was to clean my mother’s poultry and feed and water the chickens. I kept a sharp eye for the cobras -the rat snakes were harmless – who would come to steal eggs. Then, a quick shower and a bite of breakfast, and with my packed lunch in the school bag, a breezy ride to the bus in the cool morning.

I recall the small FIAT bus, imported from Italy, with fondness. The driver and the conductor were friendly and would even wait for me if I was a few minutes late. They proudly wore khaki jackets while on duty, kept the bus clean, and personally knew all their passengers. Most were the wives of chena cultivators taking their vegetables to market, and a sprinkling of schoolchildren. We passed the common bathing pool, the water a dark green, cynically nicknamed “oushada pokuna” (medicinal pond!). Humans as well as animals bathed there.

Three incidents from that time are distinctly etched on my mind. First, a forest fire. The jungle barrier around Ambakelle included a teak plantation owned by the Forest Department. During a severe drought, it caught fire. All the fallen leaves and the dry bark of the trees burned like old newspaper, sending orange fireballs swirling into the sky. After the fire burned out, in a few days, only blackened stumps of trees, with the ash covered ground underneath, could be seen. But, when the rains came the trees gave off new shoots, and the forest regenerated.

The second incident was the capture and taming of a wild elephant. Some villagers dug a deep hole, and after a male elephant fell in, kept him there for about ten days, and, with the help of two tame elephants and some men trained in the task, tamed him. It was a primitive, cruel procedure. I passed this scene twice a day on the bus, and saw how it was done.

The third incident was a classic tragedy of jealousy, revenge, and murder. Charles Peiris was a contractor who undertook minor works at Ambakelle. Of his three daughters, the first and second were married to CRI tractor drivers Thomas and Piyasena. They were both cheerful, hard working men, although Thomas was addicted to “kassippu”. The youngest, unmarried daughter was the prettiest, and both Thomas and Piyasena had been eyeing this girl. When she began to favor Piyasena with her affection, Thomas flew into a rage. One day, blind with jealousy, he shot Piyasena dead. Charles Peiris lost a son-in-law, and if the police arrested Thomas, his daughter (Thomas’ wife) would have to struggle alone with her five children. So Charles Peiris took the rap for the killing and was arrested by the police. But the villagers, who knew the truth, petitioned and Charles Peiris was later released. Thomas never went to jail but died a few years later, a broken man.

In 2005, I drove my father to Ambakelle, his first visit after 35 years. Much had changed, but old timers and their children who now worked there were delighted to see him again, and greeted him with warm affection. He had been a good boss and they remembered his generosity and kindness. A few months later, on Ambakelle’s 50th anniversary, the CRI organized a felicitation for Dr. Liyanage, the botanist who had conducted a large number of research studies at Ambakelle, and all former superintendents,

including Bertie Rodrigo, the pioneer. They were all old men now, and it was a memorable reunion in familiar surroundings. My father passed away four years later.

A few years ago, my sister and I visited Ambakelle, for old time’s sake. When we arrived, I heard someone shout “Braine ‘mahattaya avilla’” (Mr. Braine has come), and again, a few people came running. But they must have been disappointed to see it was only me, the junior Braine, and not my father! The coconut seedlings planted during my father’s time had grown to tall palms, but the internal roads remained the same. Sadly, the superintendent’s bungalow was in sorry shape, and my father’s beautiful garden was neglected and overgrown with weeds. But the jungle surrounding Ambakelle appeared to be intact, although we were told that most of the wildlife was gone and elephants no longer visited.

While writing this narrative, I went to Google maps to see what Ambakelle looked like now, fearing the worst. In Sri Lanka, no jungle, even reserves and protected ones, escape destruction. So, I was both delighted and relived to see that the jungle was intact, withstanding the numerous assaults it has faced over 65 years.

I thought of the superintendents and watchers who had risked their lives to protect the jungle and know that their attempts have succeeded. 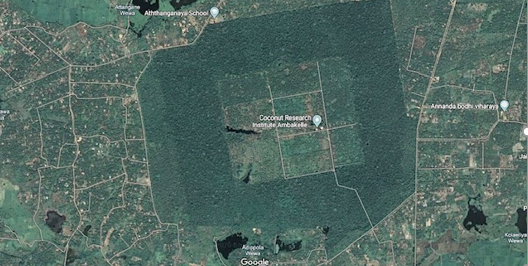