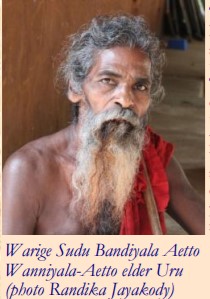 What does it mean to be indigenous? Indigenous people are often defined as those with a pre-colonial history and who have distinct cultural, religious, linguistic, and genetic status to other populations in the country.

The indigenous people of Sri Lanka are the Wanniyala-Aetto (people of the forest), commonly identified using the derogatory term, Veddhas. They are one of the oldest intact cultures in the world. The Wanniyala-Aetto live across the island, including in parts of Dambana, Rathugala and the Eastern Coast. There exists a conflict between the scientific archaeological history, and the cultural narrative. The cultural narrative based on the legend of Vijaya does not sufficiently outline the presence of indigenous people on the island and centralises Vijaya’s role in populating the island. Although Kuweni was identified, the narrative fails to associate her with the Wanniyala-Aetto. Archaeologists estimate that the Wanniyala-Aetto lived on the island dating back to between 40,000 to 125,000 years. These staggering dates are derived from archaeological evidence from various cave networks including Fa Hien Cave, Batadomba Lena and Beli Lena Cave.

The Wanniyala-Aetto maintain a hunter-gatherer-agriculturalist lifestyle and have a deep spiritual connection to the land and ecology of the island. They describe themselves as being caretakers of the environment. Being the earliest community, the Wanniyala-Aetto have significantly contributed to the cultural, racial, linguistic, and gastronomic landscape of the country. This is plainly visible in the physical and facial appearance of many Sri Lankans regardless of their identified race. Wanniyala-Aetto speak a unique language with no known origin, unlike Sinhalese which can be traced back to earlier IndoEuropean languages. Their indigenous language has deeply influenced Sinhalese through words and concepts such as “gala” “kakula”, “attha” amongst others. The Wanniyala-Aetto have faced harassment and social stigma of their way of life and successive government policies that have limited their access to the forest have disrupted their way of life and cultural
identity. Despite these adversities, the Wanniyala-Aetto continue to fight for their rights and recognition of their invaluable culture. As
Australia reconciles with its indigenous peoples, Australians of Sri Lankan origin should acknowledge and protect the rights of the Wanniyala-Aetto.

Among Randika and Jerome’s many interests is a deep passion to understand Sri Lankan history and culture. This has been facilitated through exposure to multiculturalism through their travels and living experiences in multiple countries.