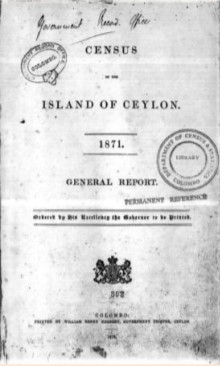 The first scientific census of Sri Lanka, then Ceylon, was conducted in March 1871. The census identified a total population of 2.4 million spread across the islands of Sri Lanka.

The census of 1871 demonstrates the staggering diversity present on the islands of Sri Lanka and is a reminder of the mixed origins of the current population. Individuals from at least 79 distinct races (as stated on the census) lived on the island at the time, and included
communities from Portugal, Netherlands, England, France, Switzerland, Germany, Ireland, and Scotland amongst others. Communities such as the Bengali, Brahmin, Carnatic, Chetty, Maratha and Pattan (Afghan) from greater Hindustan were also present.
Moors, Turks, Parsees and Jewish individuals arrived from the Middle East, whilst the Malays and Javans arrived from the Indonesian archipelago. The slave trade had also brought many individuals from the African continent, Papua New Guinea and the Philippines.
Many American, Canadian and Chinese communities were also present. The current Sri Lankan population of 21 million is likely a result of natural intermixing between the many communities identified in the census and beyond.

If the current population is an amalgamation of the various communities identified in the 1871 census, why do Sri Lankans fail to identify, accept and revel in the nation’s diversity? Many factors including political and religious views, coupled with ignorance of the historical
diversity of Sri Lanka may contribute to a reluctance to embrace diversity. Additionally, scientific research on Sri Lankan history and diversity have often been published in English, and the limited use of English across the island since the implementation of the Official
Language Act may also limit our capacity to access and understand knowledge about diversity. Although Sri Lankan society fails to consciously accept its ethnic diversity, the presence of this diversity is intricately woven into the tapestry of life on the island in our shared
traditions, food, cultural practices and music.
Though many Sri Lankans often falsely believe that these communities are a thing of the past, they continue to exist in and are present
in each of us due to decades of intermixing within the islands. With a flexible, non-judgmental attitude and an open mind, we can create
safe spaces for individuals to discuss our distinct and shared ethnic and cultural identities. Facilitating conversations will help us understand and truly appreciate the true multiculturalism inherent in the Sri Lankan identity.

Among Randika and Jerome’s many interests is a deep passion to understand Sri Lankan history and culture. This has been facilitated through exposure to multiculturalism through their travels and living