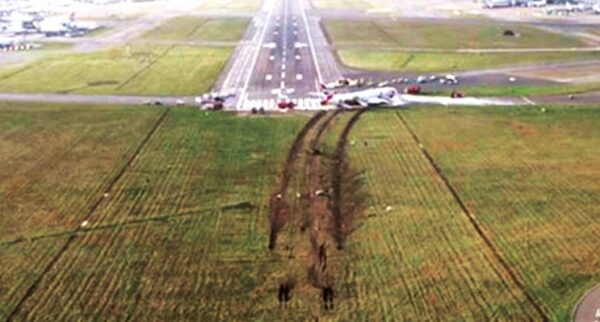 In my many years of flying, I have noticed that in the western hemisphere, winter weather is usually worse after the New Year than before. Perhaps the sting is in the tail.

On January 16, 2008, I was operating a Boeing 747-400 flight from Singapore to London-Heathrow. Our night-time departure from Singapore gave us an expected arrival time (ETA) of a few minutes before 6 am on the 17th. The flight was uneventful except for when, somewhere over Austria, we encountered a spell of cold weather at high altitude which made our fuel temperatures drop well below acceptable levels. In my 30-something years as a pilot, this was the first time I experienced such a phenomenon, in this part of the world. Our indication of fuel temperature in the wing tanks (where fuel is mostly carried) turned from the colour green to amber, prompting us to exercise caution. The very low temperatures persisted all the way to London. 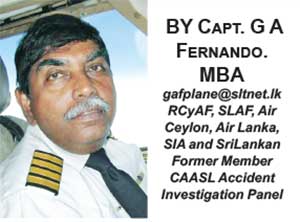 When this happens, pilots have two options: either descend to lower altitudes where there is warmer air; or increase the cruising speed, which in turn will increase air compressibility because of a phenomenon called the ‘ram effect’, thereby warming the surrounding air and, as a consequence, the fuel in the wings.

A few months before that incident, while flying a 747-400 cargo (freighter) aircraft from O’Hare Airport, Chicago, USA to Shanghai, China, on a route close to the North Pole, we experienced low fuel temperatures and decided to take the second option of increasing our cruising speed. It took a long time to raise our fuel temperatures to an acceptable level. So, in this latest instance, en route to London, I decided to descend to warmer air. It should be noted that both methods consume more fuel. Being winter, the tail winds were strong and we had made up some time and consumed less fuel than expected, so we could afford to burn extra fuel on the descent to a ‘warmer’ altitude. Apart from that, the flight was uneventful, and we touched down at London Heathrow only about a minute before our 6 am ETA.

After entry formalities were completed, followed by a short ride to our London hotel, I was in bed soon after 8.30 am. I slept soundly until approximately 1 pm. After waking up, as usual I switched on the TV and discovered that there had been a crash of a British Airways Boeing 777 at around midday, near the approach end of Heathrow’s Runway 27L (Left). The aircraft had undershot the runway badly and landed ‘short’, narrowly missing the Hatton Cross Tube Station. It was the first major accident at Heathrow Airport in 30 years.

What could have gone wrong? Were the pilots at fault? I suspected that the unusual low temperatures we experienced that morning may have been a contributory factor in the crash. Anyway, it was too early to tell, and one had to wait until the preliminary report of the Aircraft Accidents Investigation Branch (AAIB) of the UK’s Department of Transport to be published. This is their story.

The British Airways (BA) Boeing 777-263 ER (Extended Range), Registration G-YMMM, departed Beijing, China about 6 hours behind our flight. The BA Flight Dispatchers had known that there was a forecast of unusually cold air masses that morning and therefore planned the flight at lower than normal heights to prevent the fuel from being affected by low temperatures. Being not too heavy, for the sake of passenger comfort, throughout the flight high power settings were not used even for climb to intermediate levels. The descent to London had also involved minimum power for a long period. Then, at the last moment of the landing approach (at a height of 720 feet), the two engines which were on automatic thrust lost power (ran down),but did not totally quit. When the First Officer, who was the ‘pilot flying’ (PF) on that sector, opened the throttles to increase power to the required setting, the engines didn’t respond. As a result, the aircraft could not remain on the required glide path and went into a high rate of descent to maintain flying speed, consequently undershooting and touching down heavily on the grass, 330 metres short of the runway’s paved area.

For the more technically minded, the landing approach of an aircraft involves a balance of Potential Energy, Kinetic Energy, and Chemical (Fuel) Energy. While the total of Potential Energy and Kinetic Energy is a constant, Chemical Energy in variable amounts has to be used to overcome the drag created by wheels and flaps when they are extended to maintain safe flight at slow speeds (e.g. on descent and approach before landing). In fact, when it became apparent that the situation was hopeless and the aircraft was undershooting, the captain, watching helplessly in horror, quickly reduced the flap setting to reduce the drag.

On touching down with a high sink rate, the undercarriage collapsed, and the aircraft slid forward a short distance before stopping. After it stopped there was considerable leakage of fuel from both engines, but fortunately no fire. The 16 crew members and nearly all 135 passengers suffered either minor injuries or none at all. However, one passenger did incur serious injuries when a wheel mounting pierced the cabin floor as a result of the heavy ground impact. One minute and 42 seconds after the crash alarm was sounded by the control tower, emergency crews were at the crash site. (See picture 2)

Subsequently, the Air Accidents Investigation Branch (AAIB) UK took over the accident investigation. With the use of the Flight Data Recorder (FDR) and Cockpit Voice Recorder (CVR) (collectively called, inaccurately, the ‘black box’ – they are actually contained in Day-Glo orange casings to facilitate location and retrieval amongst the wreckage) they were able to reconstruct the flight, including the last few moments before the crash. As engine power was not available when demanded by the throttle inputs, it was suspected that there was some obstruction to the fuel flow into the engines. The AAIB had to simulate low temperatures and fuel flows while conducting the research. 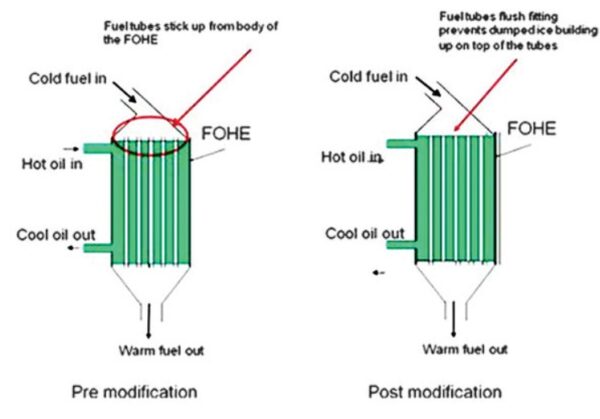 Research done on both sides of the Atlantic more than 50 years ago showed that jet fuel (a form of kerosene), when subjected to temperatures below freezing, becomes waxy and sticky. Furthermore, it is near impossible to drain all the naturally occurring water in the fuel tanks. After flying for a while in sub-zero temperatures, the fuel becomes ‘cold soaked’. Then, upon landing at the next airport, warm, humid air enters the relatively empty tanks through the air vents, and because of the presence of cold fuel, condensation occurs inside the fuel tanks, forming water droplets. Being of higher density, water will then drip and pool at the bottom of the tanks, where most of it could be physically drained by the ground engineers. However, some of the water inevitably remains and turns into ice crystals at low temperature on the next flight. It was determined by the AAIB that these were the two most likely ‘culprits’.

During the Board’s extensive investigation, it was observed that all aircraft fuel systems were designed based on this outdated research. Today’s aircraft engines, such as the Rolls-Royce Trent 800 series, which power the Boeing 777, are much larger and expected to operate for longer hours in sub-zero temperatures.

In its final report the AAIB made 18 safety-related recommendations. After which, the main component whose design was changed was the Fuel Oil Heat Exchanger (FOHE). Before entering the engine, cold fuel was heated with hot engine oil in the FOHE. (See picture 3)

In the FOHE, cold fuel was sent through tubes with hot oil from the engine circulating around them. The design of the tubes was such that they were protruding by about 4mm, not flush with face of the FOHE. When tested in the lab, it was found that this trapped and accumulated the waxy fuel, along with ice crystals in the fuel, on top of the tubes, thereby effectively blocking them. (See picture 4)

The AAIB investigation identified the following probable causal factors that led to the fuel flow restrictions:

1) Accreted ice from within the fuel system was released, causing a restriction to the engine fuel flow at the face of the FOHE on both engines.

2) Ice had formed within the fuel system, from water that occurred naturally in the fuel, whilst the aircraft operated with low fuel flows over a long period and the localised fuel temperatures were in an area described as the ‘sticky range’.

3) The FOHE, although compliant with the applicable certification requirements, was shown to be susceptible to restriction when presented with soft ice in a high concentration, with a fuel temperature that is below -10°C and a fuel flow above flight idle.

4) Certification requirements, with which the aircraft and engine fuel systems had to comply, did not take account of this phenomenon as the risk was unrecognised at that time.

“A chain is as strong as its weakest link.” The FOHE certainly was a weak link, which was accepted by Boeing and Rolls-Royce.

An intercontinental jet aircraft has thousands of components certified by the USA’s Federal Aviation Administration (FAA) or European Union Aviation Safety Agency (EASA), and must be proved to be fail-safe: a practically impossible task. Therefore, a given component is introduced to service when the authorities feel it is basically safe, and carry out rectification/modification of components when problems occur during service.

Many years ago Ralph Nader highlighted in his book ‘Collision Course’ the truth about air safety, that human life is quantified at $1,000,000/- each by the aircraft manufacturers. If a modification costs more in dollar terms than the amount of people it is meant to save, then such a modification is considered not viable. But that’s another story!