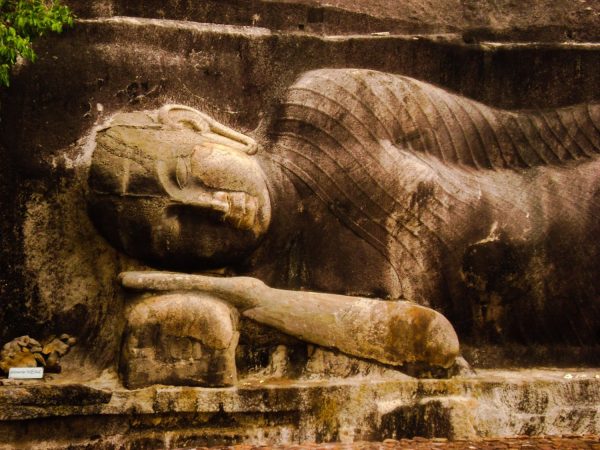 Surrounded by huge boulders and thick forest, a prominent Buddhist sacred place situated approximately 40 kilometers north-west of Anuradhapura, peace and serenity prevail in Thanthirimale Rajamaha Viharaya (Viharaya meaning temple in Sinhala). Constructed in the 3rd century BC and utilized by *King Devanampiyatissa as a one-day shelter for *Arhath Theri Sangamitta on her way to Anuradhapura, the Temple has developed from a small temple to a large monastery by the end of the *Anuradhapura Period. The easiest access from Anuradhapura is to travel along Mahavilachchiya road.

The Temple and the surrounding area are full of ruins including two stone statues and several stone ponds. There is also an archaeological museum at Thanthirimale.

Initially, known as “Upastissa Gama” as the area was first occupied and developed by Upatissa, a minister of King Vijaya (c.543-c.505 BCE) who chose the location surrounded by Malwathu Oya (Oya meaning stream in Sinhala) and Kanadara Oya by three sides to construct his future town, “Upastissa Gama”.

According to a rock inscription near the ancient *Bodhi tree at the location, during the era of King Devanampiyatissa, the King had visited the Temple in Thanthirimale and it was known as “Thivanka Bamunu-Gama” and has planted a Bodhi tree at Thanthirimale from the first shoots of *Jaya Sri Maha Bodhi in Anuradhapura. Hence, the Bodhi tree is approximately 2300 years of existence and is still in good condition. Thivanka Bamunu-Gama and the adjacent village had been home to a sage known as “Thivanka”.

The most attractive sights at Thanthirimale are Samadhi and reclining Buddha Statues carved from large rocks. Samadhi Buddha Statue located in close proximity to the Bodhi Tree displays characteristics of the late Anuradhapura Period. The Statue has an unfinished appearance with two rows of unfinished and uncarved outlines of Buddha Statues by the sides of the main statue which confirms the fact that the Statue has been constructed during the last stages of Anuradhapura Period prior to the invasion of *Kalinga-Magha and the artist had left the location without completely finishing the construction of the Statue.

The invasion of Kalinga-Maga had created a great migration from Anuradhapura Period to *Polonnaruwa Period and left many a great monastery and palace abandoned to the forest. The Buddha Statues were also left to destiny with only statues of gods and lions to protect them. The roof and its stone pillars had given away centuries ago exposing the statues to adverse weather conditions, yet the worst damage had been done by treasure hunters.

For centuries, Thanthirimale Rajamaha Viharaya had been engulfed by thick forest until it was re-discovered in early 1960s, by Venerable Kudakongaskada Wimalagnana Thero who pioneered revamping this place of worship for the general public. The Thero is considered as the leader of the contemporary temple. In 1992, the Thero was assassinated by terrorists. When the Thero rediscovered the Temple, the reclining Buddha Statue and the Samadhi Buddha Statue had been badly destroyed by treasure hunters who had burrowed and mined into the statues in search of valuable treasures. Although, the Samadhi Buddha Statue had been re-created to its initial appearance. attempts to re-create the reclining statue since 1974 by the Department of Archaeology with the assistance of skilled craftsmen has been a failure, to date.

Several stone containers originally created to contain gems had been scattered around the monastery premises and are piled up at the museum at the location. The library at the monastery known as “Pothgula” situated on a rock and 12 meditation caves have escaped the attacks of treasure hunters.

Spread over an area of approximately 101 hectares (250 acres), the *Padhanagaraya structures are the only buildings within the monastery site which had served as meditation or living areas for meditating monks. These Padhanagaraya structures had been surrounded by water and had also been used for pohoyakarma (punitive rituals). 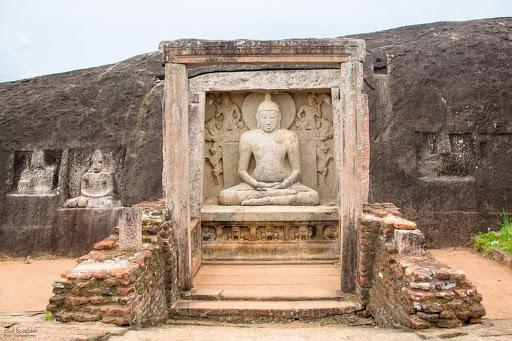 There are also five meditating caves scattered inside the deep forest of Thanthirimale, which according to archaeologists, date to the 1st century BC with *Brahmi inscriptions with details of donors.  Many scholars are of the view that these inscriptions, some as old as 4000 years, suggest the presence of a civilization in Thanthirimale, older than Buddhist Civilization.

Directions: There are two routes to reach Thanthirimale Rajamaha Viharaya.

Route One – Route through Anuradhapura – Mahavillachchiya is the most popular route among tourists. Travel approximately 20 kilometers along Sri Wimalagnana Road to reach Thanthirimale Raja Maha Viharaya. 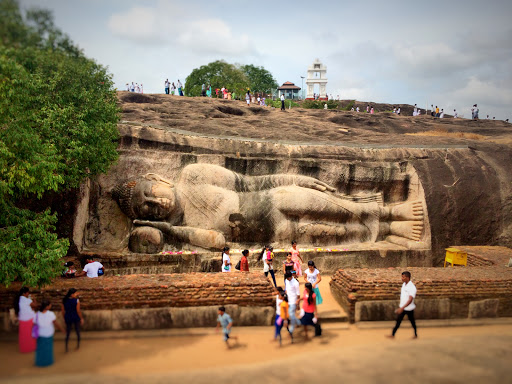