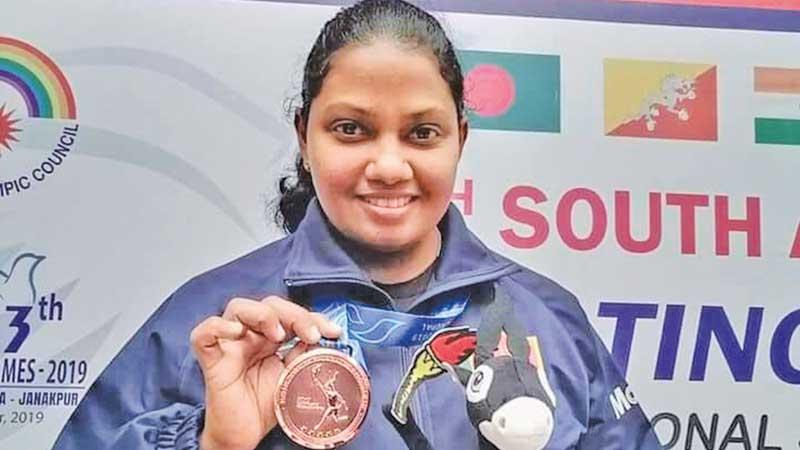 Rifle shooter Tehani Egodawela will be the first Sri Lankan in action at the XXX11nd summer Olympic Games which starts in the Japanese capital of Tokyo on July 23.

Egodawela is due to fire in the women’s 10m air rifle qualifying round at the Asaka Shooting Range on July 24, starting from 5 am Sri Lanka time.

Ranked 223rd in the world and 77th in Asia for the event, she took part in the Emir of Kuwait 8th International Shooting Grand Prix in 2019.

Two other Sri Lankans – badminton player Niluka Karunaratne and swimmer Aniqah Gaffoor are also scheduled to compete in their respective first round heats on the same day – July 24.

Gaffoor will swim in the women’s 100m butterfly stroke heats at the Tokyo Aquatic Centre from 7 pm. Before that Karunaratne will make his record third appearance in an Olympics as he plays in the men’s singles at the Musashino Forest Sport Plaza.

Born on February 13, 1985, Karunaratne is considered one of the best badminton players that Sri Lanka has ever produced, having won the Sri Lanka men’s singles crown on 13 occasions.

The only Sri Lankan to gain international recognition in the history of badminton, he was ranked 34 in the world when he played in Rio de Janeiro.

Karunaratne is the only Sri Lankan shuttler to make it three Olympics in-a-row, having played in London 2012 and Rio de Janeiro 2016. Prior to that, Thilini Jayasinghe played in the women’s singles at Beijing 2008 and London 2012.

The first set of medals in the 339-event Tokyo Olympics held across 42 venues will be decided on July 23 in archery, road cycling, fencing, judo, shooting, taekwondo and weightlifting.

After the showdown of Egodawela, Gaffoor and Karunaratne on July 24, the next Sri Lankan in action will be Milka Gehani de Siva on July 25.

The overall women’s captain of the Sri Lanka contingent will be in action in the artistic gymnastics qualification round at the Ariake Gymnastics Centre on July 25.

The overall men’s captain of the Sri Lanka contingent Chamara Dharmawardana will compete in the men’s 73kg elimination round of the judo competition at Nippon Budokan on July 26.

But the showpiece of any Olympics, the track and field completion will get underway on July 30 and will be worked off daily until the final day – August 8.

For Sri Lanka, Nimali Liyanarachchi will run in the women’s 800m preliminary round on July 30 morning.

Yupun Abeykoon will be under the starter’s orders in the men’s 100m preliminary round at Tokyo Olympic Stadium on July 31 morning. Abeykoon had a season’s best timing of 10.15 seconds, which is also his career best.

The first Sri Lankan to qualify Matilda Karlsson will be the last in action in the equestrian women’s show-jumping individual qualifying round at Equestrian Park on August 3 from 7 pm.

Born in Sri Lanka and adopted by a Swedish family when she was three months old, she is the first to ever qualify in the sport of equestrian in the 125-year-old history of the modern Olympic Games.

July 24: Tehani Egodawela in shooting women’s 10m air rifle qualifying round at Asaka Shooting Range on July 24 from 8.30 am

July 24: Niluka Karunaratne in badminton men’s singles first round heats at Musashino Forest Sport Plaza on July 24 from 9 am

July 25: Milka Gehani de Siva in artistic gymnastics women’s qualification round at Ariake Gymnastics Centre on July 25 from 10 am

Note: The above are the preliminary round schedule of Sri Lankans in Japan Standard Time and their next rounds will be known after the performances in the qualifying round.