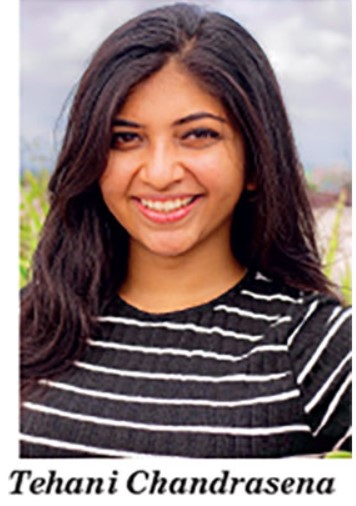 Zonta International is a leading global organization of professionals empowering women worldwide through service and advocacy. The goal of the Zonta International Young Women in Public Affairs (YWPA) Award Program is to honour young women of age 16 to 19 who demonstrate a commitment to leadership in public policy, government, and volunteer organizations.

Tehani Chandrasena was the nominee from Zonta Club II of Colombo who was then selected as the winner of the YWPA District 25 Award competing with nominees from India, Bangladesh and Nepal. This year, from the 32 exceptional candidates from all the Districts of Zonta for the 10 International awards, Tehani is the only winner from Asia amongst 9 young women from the US, Canada, Italy and Australia.

Tehani is currently living in Sri Lanka and graduates in July from Asian International School after which she will pursue her college education at the prestigious Seven Sisters Liberal Arts University, Mount Holyoke College in Massachusetts USA. She plans to study International Relations with a minor in Gender and Sexuality Studies and plans to start her own NGO with the focus on educating the girl child. Her dream is to eventually work with the United Nations.

Though about 40% of the world’s workforce is women, according to data from the Inter-Parliamentary Union, only 25.1% of all national parliamentarians were female as of 1 October 2020. Because Zonta International believes that young women are the key to women’s advancement in the field of public service, it offers the Young Women in Public Affairs (YWPA) Award, which recognizes young women for demonstrating leadership skills and commitment to public service and civic causes, and encourages them to continue their participation in public and political life.

Having a passion for social service, Tehani was the President of the Z Club of Colombo when she was 15 years old and worked on 13 projects uplifting the lives of women and children in Sri Lanka. She was also the Vice President of the Interact Club of Colombo, Senior Prefect, House Captain, Netball Captain, Choir leader, member of the Community Service Club and Vice President of the Model United Nations Cub of Asian International School. Tehani also served on the Executive Committee of the Colombo operated Model United Nations as Head of Admin for two consecutive years.

The Young Women in Public Affairs (YWPA) Award Program was established in 1990 by Past International President Leneen Forde.?Zonta has given 971 awards, US$1,109,250, to 819 young women from 58 countries. The program goal is to encourage more young women to participate in public affairs by recognizing a commitment to the volunteer sector, evidence of volunteer leadership achievements and a dedication to empowering women worldwide through service and advocacy.