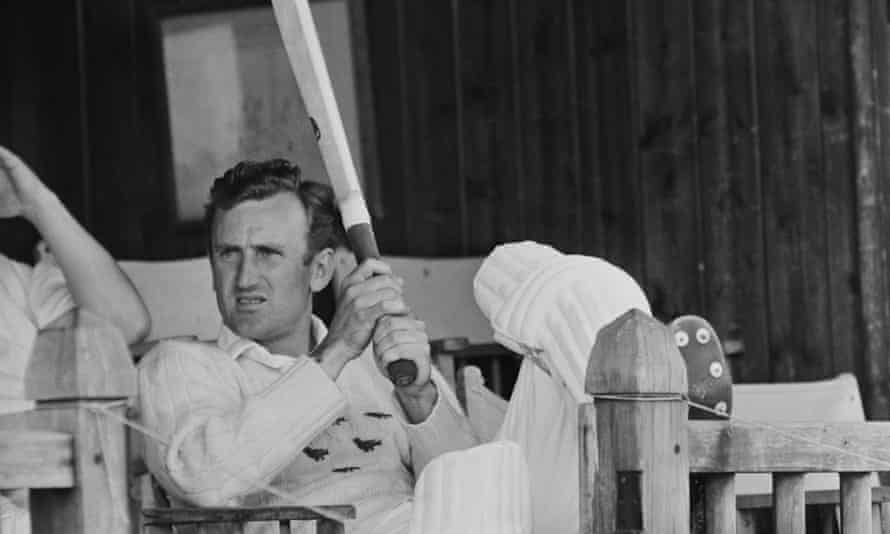 Ted Dexter in 1964 padded up to play for Sussex in a County Championship match against Kent. Photograph: Robert Stiggins/Getty Images

Ted Dexter, who has died aged 86, was a truly rare cricketer, remembered beyond his playing days less for the quantity of runs he scored than for the debonair manner in which he acquired them. At the crease he looked every inch the aristocrat, tall and erect, and with a preference for flamboyant strokeplay.

What made him doubly interesting was the sense of adventure that went with an unpredictable mindset. Teammates often felt that while he was fielding his thoughts were away from the cricket ground. Asked some years later where his one Test double century was scored, he simply could not recall. And when the telephone at home rang at an inconvenient time he answered: “This is Ted Dexter. I’m sorry I can’t take your call at present. Please ring later,” leaving the caller to assume that this had been a recorded response.

His most renowned innings for England was at Lord’s in 1963. Against a menacing West Indies fast bowling attack he unwrapped an extraordinary series of daring strokes in an innings of 70 off 75 balls, a performance that was talked about long afterwards. Dexter thought the best of his 102 Test innings was the 52 that steered England to the brink of victory against Australia at Melbourne in 1962-63, when he was captain in a rather dull Ashes series.

A tremor of excitement swept the ground whenever Dexter strode to the crease. With true Edwardian flourish his orthodox strokes were played crisply and attractively. There was a shade of aloofness about him that persuaded onlookers that they had been transported back half a century to watch RE Foster or AC MacLaren. It was widely regretted when he left the game early – in 1965 – to pursue a career in sports promotion. There was a brief comeback in 1968, but his playing career was too short for connoisseurs’ liking.

The son of Elise (nee Dartnall) and Ralph Dexter, Ted was born in Milan, Italy, where his father, a former major with the Royal Field Artillery, was a prosperous underwriter. On the outbreak of the second world war, Ted and his brother were enrolled at several UK prep schools before he went to Radley college in Oxfordshire. There he dedicated himself to cricket, and was dubbed “Lord Edward” or “Lord Ted” by the coach, Ivor Gilliat, for his insouciant attitude. “It’s been applied with envy, malice, sarcasm and downright good humour,” Dexter later wrote. “I’ve enjoyed it.” Among the junior pupils he felt disposed to punish by caning was the future comedian Peter Cook.

National service as a second lieutenant in the 11th Hussars took Dexter to Malaya. He went to Cambridge in 1955, captaining the university at Lord’s in 1958, the year of his Test debut against New Zealand. Dexter had joined Sussex – “after all, Milan was as close to Hove as any other county ground” – in 1957, and the club soon had to overlook his failure to turn up when he stayed on in Copenhagen, where a team of Cambridge cricketers had been touring, because he was “fascinated by an adorable girl”. 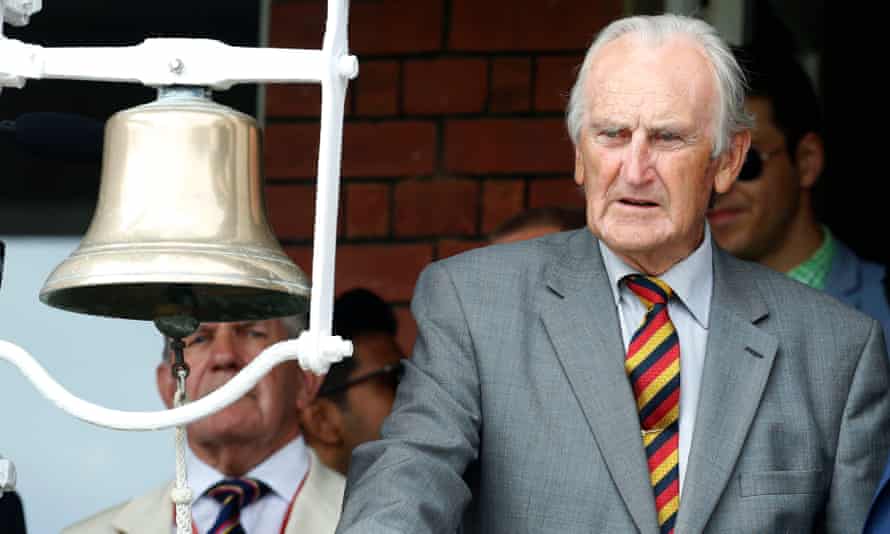 But in 1958 he scored 52 against New Zealand on his Test debut. Although a debatable omission from England’s winter tour, he was flown out to Australia when injuries depleted the side (his cravat sparked predictable derision), and made the first of his nine Test centuries, 141 against New Zealand at Christchurch.

He was a major success in the West Indies the following winter, averaging 65.75 in the Tests, with two hundreds. In 1961 against Australia his responsible 180 at Edgbaston in the opening Test steered England to safety following a huge first innings deficit, his stand with Raman Subba Row amounting to 109. At Old Trafford, Dexter’s dismissal by Richie Benaud for 76 precipitated the collapse that gave Australia a famous surprise victory.

That winter, having succeeded Peter May as England captain, he led his country with mixed results, scoring a century in Kanpur and a never-to-be-forgotten 205 at Karachi’s National Stadium. Within months he had led England to a 4-0 home victory over Pakistan, scoring consistently and finishing with 172 at the Oval, where his stand with Colin Cowdrey amounted to 248.

Dexter captained England on the Australasian tour of 1962-63, and started with a 99 (bowled by Graham McKenzie) at Brisbane. He left the field unemotionally. The series was grimly attritional, shared one Test apiece. Also there, in a non-Test match, Dexter hit the offspinner Tom Veivers for one of the biggest sixes seen anywhere. In the three Tests in New Zealand Dexter contributed little, although his side won them all comfortably. The ease of victory probably failed to fire him.

The 1963 home series against West Indies was lost, but captain Dexter left his mark with that glorious 70 at Lord’s, and at Edgbaston, with his nippy pace, he took four wickets in a Test innings for the second time – including that of the opposing captain, Frank Worrell – to help England to their sole victory.

Having missed a tedious winter tour of India, Dexter led England in another Ashes series in 1964 – won 1-0 by Australia – and staged one of his finest rearguard performances in that Old Trafford Test. Responding to Australia’s 656 for 8, England were 126 for 2 when Dexter was joined by Ken Barrington. They ground out a partnership of 246 in 325 minutes, and England finished only 45 behind as the match died a death.

Dexter had shelved his natural attacking instinct, his eight-hour 174 (his first Test century in 28 innings) having been accumulated at barely one run per over. “I had never thought him capable of such self-denial,” Denis Compton noted: it was an innings of true greatness because it was so much against the nature of the man. 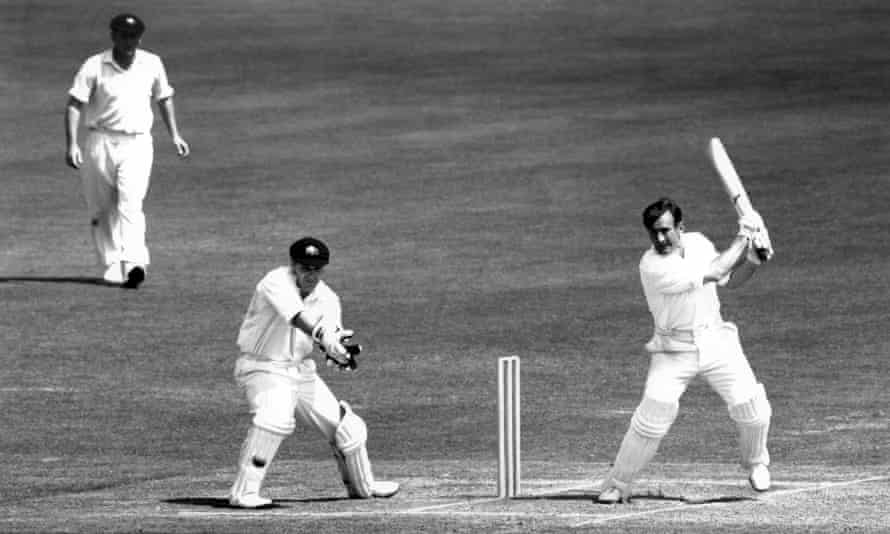 At the crease, against Australia, at Hove cricket ground in 1964. Photograph: Hulton Archive/Getty Images

During the winter of 1964-65 Dexter, ever the adventurer, contested the Cardiff South East seat for the Conservatives in the general election, against no less an incumbent than James Callaghan. After what had seemed an inevitable defeat, Dexter joined England’s winter tour of South Africa as vice-captain to MJK Smith, and averaged 57.33 in the Tests, with a big hundred at Johannesburg in the second Test. Months later he averaged 99.50 at home against New Zealand, but a freak accident kept him out for some time when his Jaguar rolled back on him as he tried to push it off the road after running out of petrol. His leg was broken. Dexter and fast cars were a dubious mix: he was fined for speeding on a number of occasions – and he often arrived at Lord’s on a flashy motorbike.

This interruption did not spell the end of his career. With Sussex, whom he captained from 1960 until 1965, he continued to enjoy in particular the new one-day format with its tactical challenges, and he held aloft the Gillette Cup in 1963 and 1964. He played a further couple of Test matches when Australia toured in 1968. His final figures from his 62 Test appearances were 4,502 runs at an average of 47.89 – but what stirring strokeplay lay within those statistics.

Cricket’s gain had been another sport’s loss, for Dexter was a superb golfer. He once halved a match with Gary Player, and in 1978 he came within inches of qualifying as an amateur for the Open Championship at St Andrews.

Dexter’s media work included a newspaper column and television commentary, with a delivery that was thoughtful, original and often hesitant (his brain, he explained, sometimes moved too fast for his tongue). His branding of the Australian fast bowler Len Pascoe as a thrower raised a predictable furore in 1977. Contracted to cover England’s successful 1970-71 tour of Australia, Dexter flew his light aircraft, Pommie’s Progress, all the way with his family on board, the journey taking five weeks.

In 1989 Dexter succeeded May as England’s chairman of selectors, breaking all precedent with a payment of £60,000 as agreed cover for lost earnings from his sports promotion company. His originality of thought sometimes drew derisive reactions, as when he attributed England’s poor performance in India to the local smog, and further sought explanations in the alignment of Venus. A committed Christian, he devised a team song during David Gower’s captaincy, Onward Gower’s Cricketers, to be sung, self-consciously as it turned out, to the tune of Onward Christian Soldiers.

He was strongly protective of his players, and his four years’ service was nothing if not entertaining. Dexter was appointed CBE in 2001. In 2007 his long Sussex attachment came full circle when he was elected club president.

In 1959 Dexter married Susan, the daughter of the former county cricketer Tom Longfield. She and their son, Tom, and daughter, Genevieve, survive him.