Tara: The Sri Lankan Deity At The British Museum- by Shannine Daniel 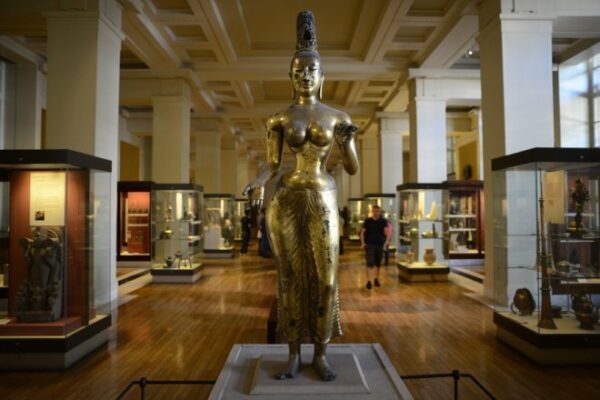 The histories of nations and civilizations are contained in the art, architecture and artefacts of their people — however, colonial interventions have resulted in so many of these pieces of history being removed and moved far away from their places of origin. Sri Lanka is no stranger to this; many of the island’s ancient treasures have been carried off across the seas to Britain, or to the homelands of other colonisers.

One such artefact is a gold-plated statue of the goddess Tara, who is revered in both Buddhist and Hindu beliefs. The British Museum in London is the current home of this statue, one of Sri Lanka’s most special and sacred antiques.

A Goddess Of Mercy And Compassion 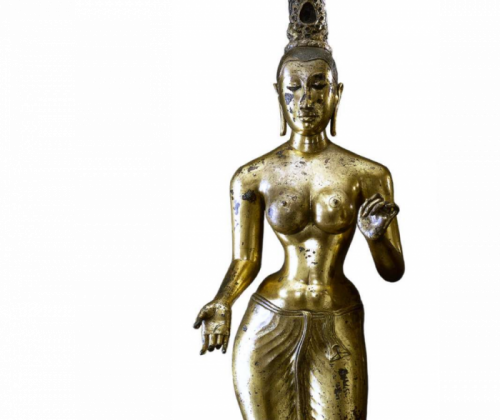 These statues are likely to have been housed in temples in Sri Lanka, and other parts of South Asia, alongside those of Tara’s male counterpart, the bodhisattva Avalokiteshvara. Bodhisattvas are beings who reached enlightenment, or nirvana, but turned back out of compassion, so that they can help others escape the cycle of death, rebirth and suffering. 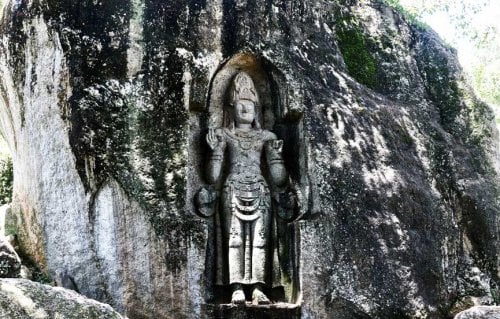 A statue of the bodhisattva Avalokiteshvara at the Kushtarajagala Viharaya in Weligama. Image credit: 22weligambay.com

While Tara is no longer worshipped in Sri Lanka, she is still popular in countries and regions such as Nepal, Tibet and Mongolia. It is believed that the goddess came into existence from a tear of Avalokiteshvara, which fell to the ground and formed a lake. A lotus flower rose up from the waters of the lake, which opened its petals to reveal the goddess. According to some Buddhist beliefs, Tara is not only a merciful and compassionate deity, but also a protector of navigation and earthly travel as well as a guide to spiritual travel along the path to enlightenment.

A Statue To Embody Beauty And Grace

The statue of Tara that is currently in the British Museum was cast in bronze and plated in gold. It depicts the goddess with her right hand held in a gesture known as varadamudra — the gesture of granting a wish, or offering blessings. While the goddess’s upper body is naked up to the waist, a sarong-like garment is draped along her hips, concealing her lower body.

Although it is difficult to determine exactly when and where the statue may have been sculpted, some scholars date it back to somewhere between the 8th and 10th centuries.  It is 143cm in height, without its plinth, and it is believed that the statue was skillfully designed to depict what would have been perceived as the epitome of feminine beauty and grace. Cavities found on parts of the statue suggest that it was originally decorated with gems — including one large gemstone on the crown that adorns the goddess’s head — which, over time, may have been lost, or perhaps stolen. Some also believe that the goddess was once depicted to be holding a lotus flower in her left hand.

This particular statue was found in the Eastern Province of Ceylon — as Sri Lanka was then known — between the years 1812 and 1822, when the country was under British rule. The Governor at the time, Robert Brownrigg, gifted the statue to the British Museum in 1830. However, it was initially never displayed and instead hidden away, the statue’s nudity was considered “too obscene” and therefore inappropriate for the British public at the time.

From Being Worshipped, To Hidden, And Finally Displayed 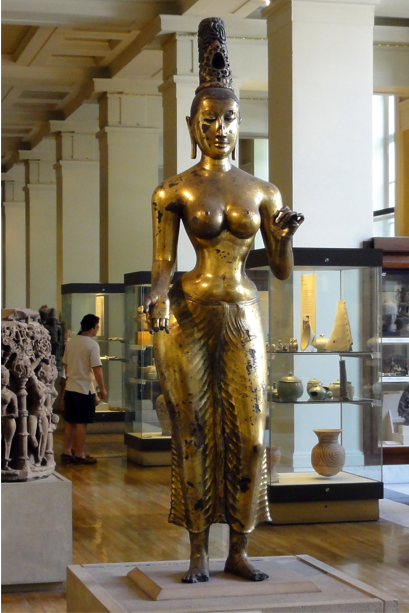 The statue of Tara, although now on display at the British Museum, was once hidden away in a secret storeroom, after being deemed “too obscene” for Victorian eyes. Image credit: wikimedia.

So instead, the statue of the goddess was placed in a secret storeroom in the Museum, called ‘the Secretum’ for around thirty years or so, along with other treasures from across the world deemed inappropriate for the Victorian public. Only highly esteemed scholars with special permits were allowed into the Secretum to study the statue of Tara and the other treasures acquired — not necessarily with the consent of the native people — from foreign lands.

It was only in 1960, more than a century after it was taken away from the land of the people that worshipped her, that the statue of Tara was finally displayed to the public. She is now a resident of Room 33 at the British Museum, surrounded by artefacts from other ancient civilisations from across South Asia.

Will Tara Ever Return Home?

The statue of Tara is no doubt valuable — and not just because of its gold plating, or because of how old it is. For many people — and especially those of Buddhist and Hindu heritage — this sculpture holds tremendous cultural value.

In the recent past, there have been myriad conversations, both online and offline, about the “stolen” or “looted” treasures being displayed in the British Museum. People from previously colonised nations have pointed out that these artefacts were forcibly taken away from their homelands, and never returned, even after countries gained Independence from British rule. Many a case has been made for why these artefacts should be returned to the countries they were taken from — including Sri Lanka.

But are we ready to bring back and take care of something as precious as the statue of the goddess Tara?

“The British Museum is one place which takes good care of its artefacts,” said a senior lecturer from the University of Colombo’s Department of History, who wished to remain unnamed. “So if we [Sri Lanka] cannot take care of the Tara sculpture in a similar manner, then we should let it be where it is,” she told Roar Media.

“There is no sense in trying to bring back the sculpture, and our other artefacts, if we do not have the facilities or the funds to do so. We will be wasting a lot of money, and right now we have a lot of issues at home, which we need to take care of. Especially the COVID-19 situation and the economic and financial issues we are going through right now. Others may disagree with my thoughts, but these are my personal opinions,” she added.

It seems unlikely that Tara will return to Sri Lanka any time soon; until then, we locals may have to make do with a replica that can be found at the National Museum in Colombo.