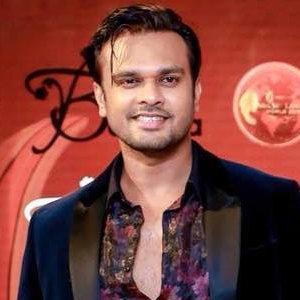 The characteristics needed to be a successful actor is to possess a stupendous acting talent together with a robust personality is absolutely essential for the trade. However, this talent has to be tagged with other qualities like coordinated movements, a well-modulated voice, passion, a propensity for dancing with a good sense of rhythm. Suraj Mapa is such an actor ,further  possesses the ability to perform diverse roles with varied sets of emotions without flaw. Suraj possesses all these qualities along with self-confidence and optimistic thinking, hence he has remained upright deciding to choose the appropriate career.As a dancer Suraj possesses the needed stamina alongside patience and perseverance withstanding hectic schedules having a good height healthy complexion also been photogenic.

Suraj is the only son also youngest having two elder sisters married presently domiciled abroad. His father was a businessman owner of a reputed hotel in Kandy while mother was a housewife.As the youngest, Suraj had got a lot of attention particularly from the mother .A student of Trinity College Kandy from his young days had studied in the commerce stream in the advanced level, had not any intention of becoming an actor though he had the aptitude for many fields, he has had been wondering what profession to pursue as a career.  Mother had been very lenient on young Suraj who had consented to whatever Suraj wished like for drawing, dancing etc. Suraj had confessed to the media in a recent television confrontation that he was talented in many fields though he had not inherited any hereditary affiliations to art though his mother’s sister Suneetha Ratnanayke had been an acclaimed dancer.Perhaps Suraj may have acquired dancing instincts from genes of her aunt. Until his advanced level in year 1999 he had not been involved strongly in much of school activities.After leaving he had followed a course in Hotel Management perhaps to take over his father’s hotel “Hotel Zurich Park”  had obtained a diploma in hotel management. Suraj has had a knack for many fields had also followed a course in IDM obtained a diploma in computer studies too had been employed as a ‘customer care executive’[ at Suntel telecommunication network. Modelling was in his blood as he was competent in many fields had performed as a model had walked the ramp for Lou Ching Wong, the famous fashion designer and for popular dress designer Nayana. Subsequently Suraj got qualified in ‘Marketing’ via SLIM.

Suraj’s  father died on 13 July 2016 after a brief illness.Suraj had confessed that he was determined not to shed tears for anyone to see though internally he was grieving. He had thought to himself as the only son with having some means then to take his funeral in a grand manner. He had decided to play some songs at the cremation site with lyrics about the father. The second song that was arranged to be played was that of “Appachchi” sung by Kasun Kalhara to his own music composition. Suraj had quipped that his father had lived a good life was very friendly person more friendlier with Suraj’s friends than even himself. Suraj had confessed that the parents’ duo had insisted all his friends who came home to visit him for lunch or dinner. At that moment he could not resist his sorrow had started shedding tears which was difficult to stop.After the father’s demise he had been even closer to his mother who had a practice to come and stay with Suraj in Colombo during a week end.On Sunday she had wanted to go back to Kandy.Mother had been having a chat over the telephone after arriving in Kandy.It was added by Suraj that during the telephone conversation she had collapsed and succumbed to death.Suraj had immediately rushed to Kandy within two and a half hours.He had been very keen to know the reason for death had even fought with doctors who were not able to give the cause of death. In fact, his mother Dayani Mapa had died on 17 August 2018 owing to a blood clot in the brain.This had happened just two years after the father’s demise which was hard to stomach to Suraj who was still a bachelor. During this period Suraj had felt been isolated as his two elder sisters who were also attached were domiciled abroad.With the Covid-19 epidemic and lockdowns Suraj had been isolated and lonely.He had lamented that it was a bad period  as a fiancé’ with whom he was in love too had deserted him.

Suraj had shown his prowess as an actor to both parents to be happy and contented who had commenced his acting career in year 2000 with the television serial Mage Sanda Oba directed by competent Prasanna Vithanage.  He was starring the main role in his debut endeavor, which gained him large popularity and also selected  as the best ‘Upcoming Actor’ award in year 2002. Also during the very early age of his career, he appeared in the serial  Suriya Daruwo” in year 2002, which made him more popular. Suraj was also nominated as the Best Upcoming Actor in year 2003 too, for the lead portrayal in the serial  “Olu” directed by Shirley P. Delankawala which made his turning point in the career. In this serial, he was portraying a role of a young English Teacher named “Asanka”] Later he won the award for the Most Popular Actor in both  Sumathi awards and Raigam Tele’es in year 2005 and 2006 respectively for these roles. In year 2005, he was adjudicated as the most popular Sri Lankan actor in the UAE.[Then he acted in the serial “Pooja” directed by Eranga Senaratne. In the serial, he played the role “Nirmala”, a famous writer who was leading a battle to save his child and the family.

With these successes, Suraj became a sought-after actor when he portrayed several lead roles particularly as the lover in the serials such as Sapumali, Poojasanaya, Ridee Siththam, Sepalika, Muthu Wessak, and Mage Sanda Oba. In 2016, he acted in the serial Kalu Araliya by performing multiple roles as famous actor Vishwa Dissanayake, servant Muni and as a disabled person. Then he was nominated and adjudicated as the best actor award for the serial as well. In  year 2017, he acted in the science fiction serial Lokantharayo directed by Thushara Tennakoon, where Suraj scripted dual roles. In the same year, portrayed a role in the popular crime serial Haara Kotiya where he portrayed the role of gang leader “Napoléon”. In year 2018, he acted in the serial Amuthu Rasikaya with the role of “Vijitha”, where he obtained award nominations

Owing to his involvement in teledramas constantly Suraj had portrayed roles in a fewer number of films, the number is less than ten films. Suraj’s debut film was a far back in year 2004 as a supporting role in Roy de Silva’s comedy film “clean out’.Subsequently he portrayed a role in the Belgium film “ Semi Tower” Thereafter Suraj portrayed a role in “Sikiru Hathe” directed by Giriraj Kaushalya, which became a blockbuster film becoming the highest-grossing film in 2007. In  year  2019 he portrayed a role in the film ‘Uththara”.

Suraj was invited to play roles apart in television serials and films, he also acted in several single episode teledrama such as Sansara Sewanali – Podi Hamuduruwo, and Thunkal Sihinaya[ as well the telefilm Mathaka Sihina.Suraj in total had acted in excess of thirty teledramas and serials.

Suraj had commenced dancing at school age having excelled in Latin American dance. He had studied dancing under Neomi Rajaratnam and performed at many events both locally and internationally such as “Footwork Dance Sport 2002”. As Suraj was very talented in Latin Dance a bit of inherited affiliation from Aunt. Suraj always works on positioning himself as an actor with dancing capabilities. This was an advantage for most producers to exploit his dancing aptitude. His maiden dance show titled Elements with Surya was held at Bishop’s college auditorium on 14th–15th  May 2010   On 27 February 2016, Suraj organized a dance show with over fifty dancers. The show was held at the Dharmaraja College Auditorium Kandy his home town. In year 2013, he contested for the reality program Derana City of Dance, The Ultimate Level which was telecast by TV Derana. Thereafter in year  2018 Hiru Mega Stars telecast by Hiru TV both very popular among viewers too apart from the audiences. In the same year, he learned Kandyan dance traditions under dance guru Kulasiri Budawatta becoming a Ves Kandyan dancer in  year 2014.This was at a time when Suraj had been depressed over some incidents he had confronted while in the dancing atmosphere. Suraj had trained under the guru for two years with a huge enthusiasm. In a recent television dialogue Suraj  had confessed that a few like Kulasiri Budawatta had helped him in his journey to date whom he remembers dearly. .

In year2015, Suraj commenced ‘Suraj Dance Academy ‘where he conducts workshops in Colombo and Kandy patronized hugely It should be mentioned that in Ridee Reyak yearly extravaganza the participation of Suraj had made a huge contribution and impact for the entire concert not only his own dance acts but for guiding many.

Suraj has contributed as a producer for the serial Dagammadiyawa. He was also portraying a role in it for which he was awarded a Merit Award in Sumathi Awards Ceremony. In year 2008, he hosted the reality shown Sirasa Dancing stars season one combining with Nirosha Perera, which later won the most popular award in year 2008.

Suraj had been brought up with very good manners.He had followed his father’s footsteps not to be a debtor to anyone advised to emulate him.The parent duo had advised him to be humble and simple not be carried away by popularity help others , to address even the fish monger as ‘aiya’ instead of ‘maalu karaya”.In this context Suraj is a very simple down to earth person friendly with all persons he meet.Lately he had met his fiancé’ hoping to get married soon. Suraj is of the opinion that all love affairs should not end in marriage as the duo should be able to understand each other properly. In the television program ‘Mathra’ in which Suraj participated on the 3rd May he disclosed about his personal and acting field elaborately  selected a duet “Sina Pipena me wasanthe’ sung by Lakshman Wijesekera and Samitha Mudunkotuwa which Suraj confessed a song he liked  very much both by him and his fiancé’. Suraj did say that many ask him why he is not marrying, some had even gestured thought would not marry at all.Suraj had added the late was until he found the best person.All his fans would wish Suraj Mapa a successful family life also wish him for his future, career in acting and dancing.