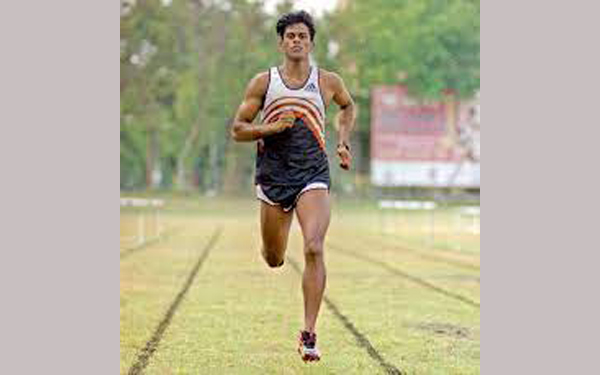 He was born on July 30, 1973 in Norton Bridge and had his early education at Vidulipura MV and later went on to become the President of the Sri Lanka Athletics Association.

He showed early promise while competing in the 200m and 400m events at Inter-Schools Athletics Meets while training under the guidance of veteran Coach Anura Bandara.

He later joined Ambagamuwa MV, Ginigathhena and completed his GCE Advanced Level Examination successfully by obtaining four ‘B’ passes.. He made his international debut in style by winning the Gold Medal with a record time of 46.58s in the 400m event at the 1993 South Asian Federation (SAF) Games held in Dhaka, Bangladesh. He also helped Sri Lanka to win the Gold Medal in the 4X400m relay event at the same meet. Thilakaratne once again bettered the 400m SAF Games record with a time of 46.12s in Madras, India in 1995. He also joined the 4X400m relay team and won the event with a record timing of 3.07.57s. He was once again part of the 4X400m Sri Lankan Relay Team that won the Gold Medal at the 2004 SAF Games in Islamabad, Pakistan. Thilakaratne went on to reach new heights and shattered W. Wimaladasa’s 400m national record by clocking 45.58s at the 1997 World Athletics Championships in Athens, Greece.

He was also Sri Lanka’s representative at the World Athletics Championships in 1999 (Seville, Spain), 2001 (Edmonton, Canada) and 2003 (Paris, France).

Thilakaratne was a champion 400m athlete in the Asian region and set a new record of 44.61s at the 1998 Asian Championships held in Fukuoka, Japan. He also helped Sri Lanka to win the Bronze Medal in the 4X400m relay at the same meet.

Earlier, he won the 400m Bronze Medal at the 1995 Asian Championships in Jakarta, Indonesia and produced a repeat performance at the 2002 Meet held in Colombo.

Thilakaratne also had a great amount of success at the Asian Games and his best performance came in 1998 where he won the Gold Medal in the 400m event and the Bronze Medal in the 200m event in Bangkok, Thailand.