Located on the East Coast of Sri Lanka, in *Trincomalee, approximately 350 kilometers north of the key East-West shipping lanes of the Indian Ocean, Trincomalee Port is formed by a large natural deep-water harbor, the fifth largest natural harbor as well as one of the finest natural harbors in the world. It is the most valuable asset of Sri Lanka.

According to historical data in *Mahawamsa, the great Chronicle, Trincomalee Port had been first occupied in the 5th century and was known as “Gokanna”.  Trincomalee Harbor has been a sea port from the period of ancient Sri Lankan Kings and has attracted sea farers such as Marco Polo and Ptolemy as well as Sea Traders from China and East Asia. As such, during early and medieval period, sailing ships had found a haven in Trincomalee Port.

Situated on a peninsula in Trincomalee Bay, formerly called Koddiyar (meaning “Fort by the River”), the bay was known as ‘Baía dos Arcos’ by the Portuguese.

Trincomalee known as “Trinco” in mariners’ jargon has great depths of water and a vast ocean space to maneuver massive vessels. 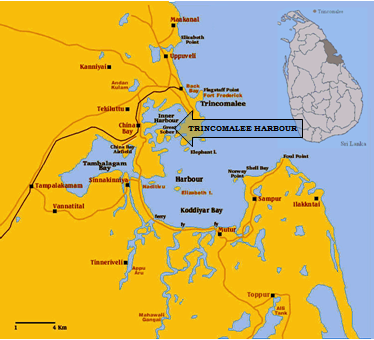 Located in a strategic point near the Bay of Bengal, during World War II, Trincomalee Harbor had been used as the main base for Eastern Fleet and British Royal Navy. Located in the heart of the Indian Ocean, the Port’s strategic significance has molded its history with several sea battles taking place to capture the harbor. As such, the harbor has been under the control of the Portuguese, the Dutch, the French as well as the British.

Hence, the geostrategic location of Sri Lanka had been used for commercial, industrial as well as for military purposes in the past. As the splendid deep-water port in Trincomalee has been strategic as well as a commercially significant harbor to Colonials, in 1795, it was taken over by the British. The Port was also the base for the British East Indian Squadron as well as subsequent naval presence after the end of World War II. Hence, the British had used it as a naval base during the British Colonial Era.

In1956, the Government of *Ceylon took over Trincomalee Harbor from the British and developed it as a commercial harbor.

When Sri Lanka’s key harbor, Colombo Port had labor and congestion issues in 1960’s, some naval traffic had been diverted to Trincomalee Port.

Meanwhile in April 2019, funded by Japan International Cooperation Agency (JICA), a grant amounting to $9 million was donated and the Trincomalee Port was equipped with new night navigation and radar systems which enables the Port to handle its operations 24/7 as well as increase the volume of cargo it handles.

According to Sri Lanka Ports Authority, the available water and land area of the Trincomalee Port is approximately 10 times as much as the Colombo Port. As such, Trincomalee Port has a water area of 1630 hectares when compared to Colombo Port which has approximately 220 hectares. The depths inside the Port are over 20 meters near the berths and over 30 meters in the turning basin, whereas the outer harbor has an average depth of 200 meters and in certain places, it is more than 1000 meters deep. Due to the available depth and sea room in the Trincomalee Harbor, large vessels such as *Chinamax can be berthed at the Port.

If envisaged from a strategic point of view, Trincomalee Harbor has immense potentials to serve as a strategic geo-economic and geopolitical hub in the Indian Ocean in the 21st century, an asset for Sri Lanka.