Home  ⁄  Article  ⁄  Stories Behind Names of Places in Sri Lanka: How “Kiribathgoda” got its Name By Dr. Nimal Sedera
Oct 4, 2021 Posted by Canadaadmin In Article Tagged Nimal Sedera

Stories Behind Names of Places in Sri Lanka:
How “Kiribathgoda” got its Name By Dr. Nimal Sedera

Many names of places in Sri Lanka are linked to incidents with Kings. But today we are looking into a different kind of story linked to the British period.

It is “Kiribathgoda”, now a prominent place in modern Sri Lanka. The Colombo Kandy Road goes through “Kiribathgoda” and one could see the progress that has taken place in the Kiribathgoda town within the past two decades. This is today a popular shopping city and the land value too has skyrocketed. 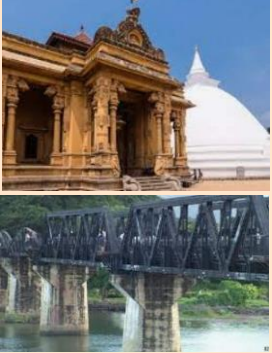 During the period before the Western invasion of the country, all this area was known as Kelaniya. Kelaniya was and is a sacred city of the country and to the Buddhists it is a blessed place where the lord Buddha has visited. People from all parts of the country came to worship Kelaniya and they had to cross the Kelaniya river to reach the temple. So, there was heavy boat and ferry traffic to take people to the temple.

With the British capturing the country and establishing their power in Colombo, building bridges across the rivers around the capital city became a top priority for economic and safety reasons. They wanted a network of good roads to manage the country and for better transport. So, building a bridge across the Kelani river was begun. It was a landmark event in our history. It had a tremendous impact on the life of the people. It completely crippled the boat and ferry system that prevailed before.

Thousnds of people were needed to construct the bridge. It was done solely with human power. It was a major construction site. Many daily paid workers were hired. They carried their meals with them. Some brought the breakfast as well as lunch with them. The most popular meal that they could carry for both meals was “KIRIBATH’ (Milk rice). Thousands of workers left the leftover “KIRIBATH” near the shade trees where they relaxed to have meals. This resulted in a huge pile of of “KIRIBATH”. So everyone was talking of the piled
“Kiribathgoda”. That is how the name “Kiribathgoda” came into being for the area adjoining the Kelani bridge.