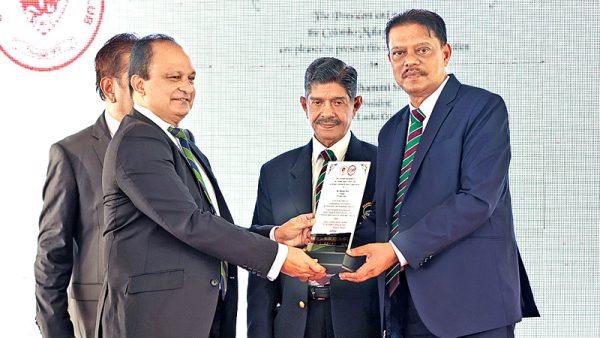 A commemorative plaque being presented to CEO of Sri Lanka Cricket Ashley de Silva by the CMCC President Rizwan Badoordeen.

State Minister of Urban Development, Waste Disposal and Community Cleanliness, Dr Nalaka Godahewa, hailed the rich contribution made by the Malay community attending a ceremony to mark the 150th anniversary of the Colombo Malay Cricket Club (CMCC) at the Padang complex in Slave Island.

The chief guest at the inauguration ceremony of the 150th year of where a First Day Cover was launched by the Philatelic Bureau to mark this momentous occasion, Dr Godahewa highlighted the role played by the Malay community in various fields and for the rich diversity, they bring to the nation’s culture.

“Malay community is I think one of the most peaceful and one of the most friendliest communities in our Sri Lankan brotherhood. I have never heard anybody ever complaining about this community even during the bad times that we have had where our brothers were divided and started fighting against each other and finally even led to war. I think now that the peace has returned we must all endeavour to keep this brotherhood together and be one Sri Lankan nation where everybody is allowed to maintain their dignity and their place in the society without any discrimination. That has always been my wish and I am sure that is your wish as well,” he said addressing a distinguished gathering comprising Indonesian Ambassador Her Excellency Dewi Gustina Tobing, Malaysian High Commissioner His Excellency Tan Yang Thai, Deputy Postmaster General (Development) Thusitha Hulangamuwa, Director of the Philatelic Bureau Shantha Kumara Meegama, CEO (Chief Executive Officer) of Sri Lanka Cricket Ashley de Silva and Sri Lanka Rugby president Rizly Illyas.

“Your community has contributed to this country in many ways. You have had important personalities in different fields such as politics, arts, education, sports, business and military. I am sure this will continue. Your children will also be important citizens of this country and I take this opportunity to congratulate all of you for what you are doing for this country and wish you all the very best for your future generations,” said Dr Godahewa who cancelled a pre-arranged visit to Badulla to attend this event.

The celebrations continued throughout the day with a series of sports events to commemorate the historical significance of the event.

Sri Lanka’s oldest cricket club, CMCC was founded in 1872 after a historic cricket match was played between an All-Malay team of the Ceylon Rifle Regiment and a British Regimental team on 23rd March 1872. Consequently, the British Government gifted the Rifle Green Parade grounds in 1872 which led to the founding of the CMCC.

Cricket, sepak takraw and netball matches were played to mark the historic occasion with CMCC pitted against Army and Police teams.

According to a senior CMCC member, the significance of playing a cricket match against the Army was because of the historic encounter in 1872. The first sepak takraw match in Sri Lanka was played at the Padang in 1985. Playing a netball match against Police was because the then IGP (Inspector General of Police) MWF Abeykoon ceremonially declared open the Padang grounds in 1961.

Army also overwhelmed CMCC in the sepak takraw clash winning the best-of-three match 2-0 with scores of 15-8 16-14.