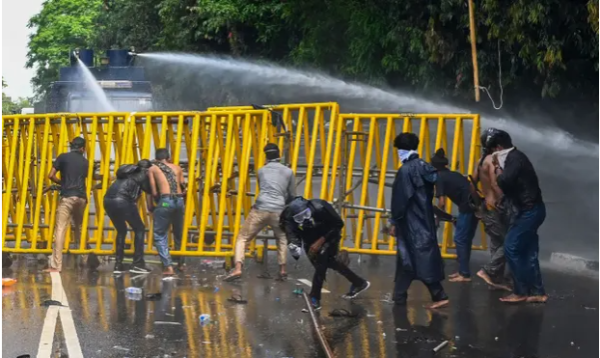 Sri Lanka’s president has declared a state of emergency for the second time in five weeks, giving security forces sweeping powers as a nationwide strike demanding his resignation brought the country to standstill.

A spokesperson for Gotabaya Rajapaksa said he invoked the tough laws to “ensure public order” after shops closed and public transport was halted on Friday by unions blaming him for the unprecedented economic crisis, which has ignited weeks of unrest.

The state of emergency gives powers to security forces to arrest and detain suspects for long periods without judicial supervision. It also allows the deployment of troops to maintain law and order in addition to police.

“The president used his executive powers to invoke emergency regulations to ensure the maintenance of essential services and public order,” the spokesperson said. He said the laws will go into effect from midnight on Friday.

Rajapaksa had declared an earlier state of emergency on 1 April, a day after thousands of protesters attempted to storm his private home in the capital. That emergency was allowed to lapse on 14 April.

But protests have escalated since then. The new emergency declaration came as thousands of demonstrators remained outside Rajapaksa’s seafront office, where they have been protesting since 9 April, and smaller groups tried to storm homes of other key government politicians.

The 85,000-strong police force had stepped up security for all ruling party legislators. But they were stretched to the limit and had asked the security forces to reinforce them.