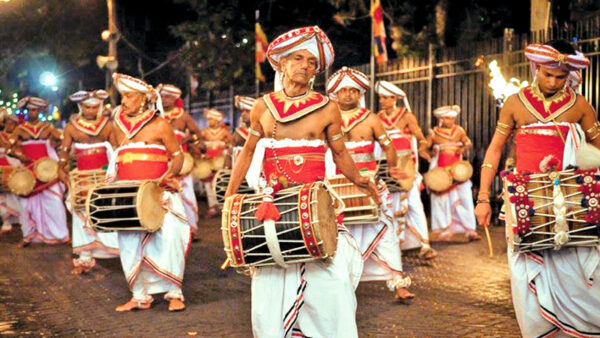 Sri Lankan culture is beautifully bestowed with art, music, literature and religious heritage. Music is a universal language that has the mesmerising power to connect people. Sri Lanka has its distinct musical melodies and beats.

It is interesting to note that most of the instruments, especially the drums are strongly affiliated with religious ceremonies and rituals, found within Buddhism and Hinduism. The great chronicle Mahavamsa classifies the traditional musical instruments of the island under a system recognised as pancaturya nada (panca means fivefold). I have been told the first two refer to drums: atata (single-headed drums) and vitata (double-headed drums). The connection between the musician and their instrument still remains individualised and pervasively strong, perhaps influenced by decades of drum performing. 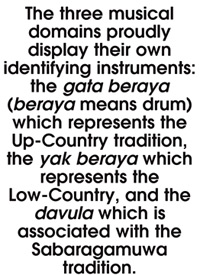 Within this traditional music, three distinct traditions are identified as Up-Country (Kandyan or uda rata), Low-Country (pahatha rata) and Sabaragamuwa, according to the geographical terrains. These three musical domains proudly display their own identifying instruments: the gata beraya (beraya means drum) which represents the Up-Country tradition, the yak beraya which represents the Low-Country, and the davula which is associated with the Sabaragamuwa tradition. Another drum called the tammattama has been embraced commonly in all three regions.

My first visual acquaintance with these drums was at temples and kovils. In my opinion, unlike Western drums which are more modern and thrive on electric sound systems, our traditional drums have a deep soul. It is not just the drum but the connection of the craftsmen making them, using skills passed down from the time of our ancient kings. There are still a few villages where these talented men work silently, creating drums that powerfully unleash beats. The preferred wood, chosen by rural drum makers for the body of the drum, is from trees with hard cores such as ahala, milla, kohomba, jack and kithul. As per local craftsmen’s traditional thinking, for drum making, trees growing near a temple or trees brought down by lightning are used. I was told that trees growing adjacent to cemeteries are not used by rural drum makers, no matter how good the quality of the wood is.

Most visiting tourists will observe various kinds of local drums at the flamboyant Buddhist perahera processions, which serve as a platform to showcase regional dance and drums – apart from the primary veneration of the noble Buddha. The Temple of the Sacred Tooth Relic in Kandy is one place where the hevisi performance can be seen and appreciated amidst cool winds.

Drums are played at centuries-old rituals. Some of the common rituals are as follows. The term bali refers to an offering of a gift or oblation. The bali ritual stems from a belief in the benevolent and malevolent influences of the nine planetary deities on humans. During this ritual, the planetary deities are pacified in order to ward off their evil influences. Thovil rituals are identified as rituals carried out to ward off evil influences inflicted by demons. Traditionally, thovil rituals are exorcism rites. The third traditional segment of rituals, madu – are communal rituals carried out in honour of the deities. These rituals intend to bring blessings to the community.

Within the diverse spectrum of Sri Lankan beats, the most commonly used drums are the gata beraya, yak beraya, davula, tammattama, uddakkiya and rabana. The gata beraya proudly represents the Up Country drumming tradition and is a double-headed barrel-shaped drum. The two drumheads are covered with different skins. Cow skin is used for the drumhead which produces a bass sound while the other side is covered with goatskin. Another beautiful drum seen at the perahera processions is the davula representing the Sabragamuwa region of Sri Lanka. This drum is cylindrical, and played with a specially carved stick (kaddippuva) on one side and using the hand on the other side.

The yak beraya (demon drum) is the primary instrument representing the Low-Country tradition of drumming. The yak beraya is also known as the devol beraya (named after the ritual devol maduva), ruhunu beraya (after a kingdom of the South called Ruhunu), and as the pahatarata beraya (Low-Country drum). The yak beraya is used in several secular performance contexts: Buddhist weddings, parades that welcome dignitaries and performances aimed at impressing tourists.

The tammattama drums consist of a pair of vessel-shaped kettle drums, played using a pair of special cane sticks with curved, circular ends. The drummer who plays this seems to display lots of energy when playing – this is my personal observation. Two other lesser appreciated Sri Lankan drums are the uddakkiya, which is an hourglass-shaped drum and the rabana, which is a frame drum. The rabana is popular in music videos. The bigger rabana is always part of the April New Year celebrations, where it is played using both hands. This is a fun spectacle to watch, especially, if the drummers are beautiful young women in their flower design printed traditional clothes. During rituals and temple events, a conch shell (hak gediya) and a small hand-held bell (mini gediya) are also used to enhance the traditional drum beats. The robust blowing of the hak gediya (conch shell) often accompanies the magul bera (auspicious drumming) element and is depicted as releasing a positive aura or blessing. In rituals, there is a connection between the drummer and the dancer. They manifest their art as a glorious team.

Making drums is a skill perfected with pious patience. After the body of the instrument is carved out, it is kept under flowing water for a few days. It is subsequently taken out and dried in the shade. A paste of heated resin is carefully coated on the inside of the drum. An oral tradition says that the gata beraya and the yak beraya were believed to be left uncoloured. However, the davula, tammattama, uddakkiya and rabana are coloured with natural paints.

Cow and goatskins require preparation by instrument makers. The fleshy side of the skin is coated with ash, to stop it from decomposing. The skin is then spread on a flat surface, thoroughly stretched held by pegs. The stretched skin is later dried under the sun. The varapata (straps on the drum) are cut to around a quarter of an inch in width from dried cowhide. These sturdy straps hold the two outer skins of the drum together. The tuning of the drum is generally done using the palm.

In the Tamil-Hindu rituals, drums are played at kovil festivals such as the world-famous Nallur Kandaswamy Kovil festival in Jaffna. Parai melam (a double-headed cylindrical drum played with two sticks) music occupies a significant position in the Jaffna Tamil domain of rituals. Parai melam is identified as an ancient Tamil music instrument, which dates back to the Sangam period. The parai drum was used as effective communication to announce important messages to people; it was also played at weddings, rituals, and kovils.

The mridangam is played in Tamil cultural settings, within an ensemble. The thavil is a large drum of Indian origin, but now used widely in Sri Lankan kovil festivals. The Sinhalese and Tamil drummers have a rich musical heritage from centuries ago. I have spoken to some of these men and they claim that they are not duly recognised as cultural musicians. Some are not keen to take part in commercialised performances, but oblige due to economic needs at home. Many wanted their children to learn and get better jobs, thus leaving a void for traditional drummers in the future.

We must appreciate our traditional drummers and preserve their skills. Let’s hope our nation’s traditional drums will beat and resonate with Sri Lankan pride for centuries to come. 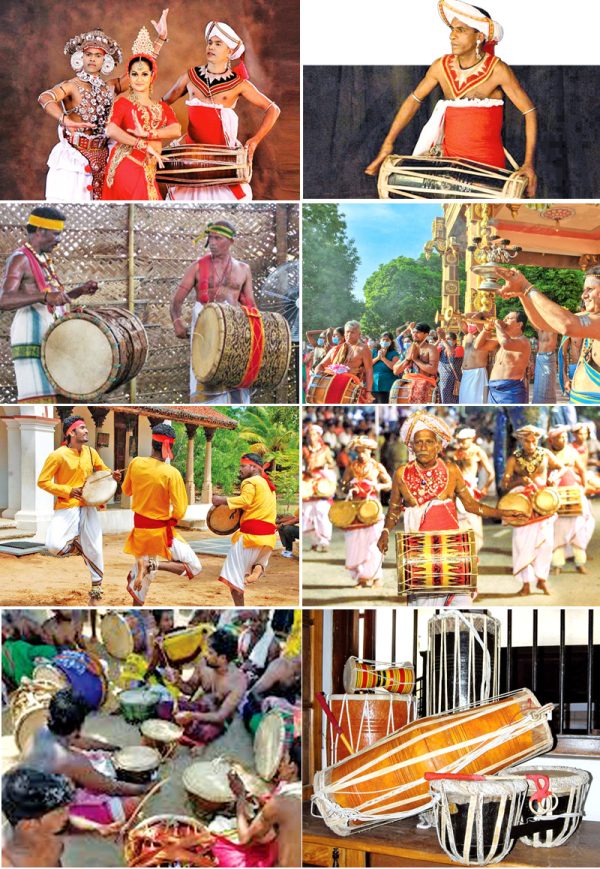