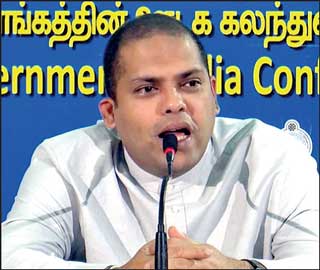 Sri Lanka Tourism yesterday outlined key strategies to double the arrivals to 1.5 million and to generate an income of over $ 5 billion highlighting the sector as a major economic driver.

“We have set an ambitious arrival target of 1.5 million tourists for next year and a 3 million arrivals target for 2024. I am confident that we can make a leapfrog to growth from 2024 onwards,” Tourism Minister Harin Fernando told journalists at a special media briefing organised by the Government Information Department yesterday.

He also expressed confidence in achieving the 800,000 arrivals target of this year, banking on Sri Lankan diaspora who will come to visit their friends and family after two years post-COVID pandemic.

“Tourism can play a major role in Sri Lanka’s recovery and this is what we are aiming for next year and beyond,” he said.

Minister Fernando said Sri Lanka is aiming to generate over 5 billion in income next year with high-end travellers who spend over $ 400 per day from the current $ 200.

“We are banking on our traditional markets such as the UK, Germany, France, and Eastern European markets like Russia this winter. The industry informed that January to March reservations is looking promising with the block-bookings on airlines as well,” he stressed.

Minister Fernando said the authorities along with private sector players are ramping up collective efforts to exploit all available opportunities to boost foreign exchange earnings via the tourism industry for a speedy economic revival.

“I believe that the Government should be a facilitator by making clear and consistent policies and let the industry stakeholders do their job best,” he said.

He also said that they will explore new markets such as Japan, Korea, Georgia, Australia, New Zealand and Eastern Europe countries, adding that plans are also underway to attract the many US tourists coming from India to Sri Lanka.

“We have identified 49 Tourism Zones and of that 14 have been gazetted and whilst the others will also be gazetted before the end of the year,” he said.

Noting the financial moratorium extended to the tourism industry as the key challenge the Government needs to resolve, Fernando said he hoped to discuss the matter with President and Finance Minister Ranil Wickremesinghe by next week.

“It is understood that the financial moratorium extended for the tourism industry has caused complications to the banking and financial sector and the stability of the banking sector is also important. However, we must also protect the livelihood of the SME sector engaged in the tourism industry and make a fair decision which will be beneficial for both sectors,” he explained.

He said all the strategies will make 2023 a comfortable springboard to leverage growth and investments beyond 2024,

Minister Fernando also highlighted the bottlenecks to implementing some of the promotions, licenses and others, whilst adding that the soft liquor license was one of those that they cleared which has now issued 400 licenses.

“This will help the industry have a clear vision of the industry objectives and goals. It includes regional development, increasing female participation, identifying new tourist attractions, markets and so on,” he said.

SLTDA Chief said around 33% to 35% of the travellers coming to Sri Lanka are repeat customers and it was important to ensure there are new attractions for them as well as to promote the destination through word of the mount.

Sri Lanka Tourism Promotion Bureau Chairman Chalaka Gajabahu said Sri Lanka will not opt for a global campaign given the foreign exchange crisis and would rather focus on new markets identified and mentioned by the Minister.

“This industry is directly dealing with people and their mindsets. It is not as easy as getting down some goods, but rather we all have to provide evidence that the ground realities are safe and sound. The negative publicity the country had over the political turmoil has a price and now we are rectifying those and waiting for the people to come to Sri Lanka,” he said.

Sri Lanka Institute of Tourism and Hotel Management Chairman Shirantha Peiris said they are experiencing a challenging environment with many migrating but underscored commitment and initiatives taken to build and meet the workforce of the industry.