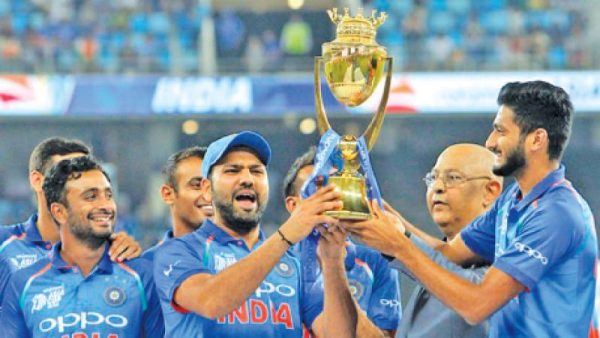 India the winners of the last Asia Cup in 2018

Political instability and shortage of essential services have forced Sri Lanka to shift the much awaited Asia Cup T20 championship to the United Arab Emirates.

Sri Lanka had earlier drawn up plans to host the matches in Colombo, Hambantota and Pallekele in the six-nation championship scheduled to be held from August 27 to September 11.

“Considering the prevailing situation in Sri Lanka, the ACC (Asian Cricket Council) after extensive deliberation has unanimously concluded that it would be appropriate to relocate the tournament from Sri Lanka to the UAE”, the Asian Cricket Council said in a statement.

The statement said the ACC was “mindful of the passionate Sri Lankan fans” and the final decision to change the venue had been “very difficult” and “one that was deemed necessary”.

“The ACC remains committed to supporting the sport and all its fans and is deeply thankful for the unwavering efforts made by SLC (Sri Lanka Cricket) in ensuring the tournament continues as scheduled,” the statement added.

Sri Lanka Cricket president Shammi Silva said his organization will do everything possible to ensure an “exciting edition of the Asia Cup in the UAE”.

“While I fully stand by the ACC’s decision to shift the Asia Cup to the UAE considering the current context and the magnitude of the event, Sri Lanka Cricket will work closely with the ACC and the Emirates Cricket Board to ensure that we will have an exciting edition of the Asia Cup,” said Silva.

Sri Lanka, India, Pakistan, Bangladesh and two other teams are in the fray.