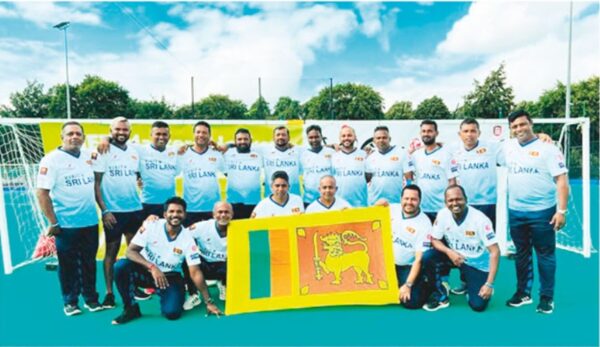 Sri Lanka Masters over 40 hockey team recorded its second win in the Masters World Cup history when they beat Italy 4-3 in the ranking games at the sport’s prestigious veteran tournament held in Nottingham, England.

Sri Lanka’s over 40 team, which lost all six round-robin matches against the World’s top European veteran hockey teams by big margins in Group A, put its house in order to win the crucial match in the 14-nation tournament.

Italy also lost all six group matches by margins less than that of Sri Lanka’s in Group B.

The match was crucial for the both teams to avoid being ranked at the last position in this year’s Masters World Cup.

The game was evenly poised, but Sri Lanka took the lead at the 11th minute when Sampath Subasinghe scored the first goal to a rebound for a penalty corner hit by vice-captain and Sri Lanka’s center forward Nadith Kudagama.

Duncan Devendra scored the second goal via a penalty stroke at the 17th minute and made it 2-0.

However, Italy fought back with Andrea Graziano scoring a field goal. Later, Sri Lanka defender Sanjay Edgar scored the third goal just before the half time to end the first half 3-1.

However, an excellent forward combination of Nadith Kudagama, Mahesh Matiwala, and Duncan Devendra breached through the Italian defence and scored Sri Lanka’s fourth goal at the 60th minute of the game. Devendra netted the ball to score his fourth goal in the 2022 World Cup.

Italy skipper Alessandro Onano scored their third goal at the 67th minute of the game via a field goal and reduced the margin to 4-3. Sri Lanka saw some nervous moments in the last three minutes as Italy forwards breached Sri Lankan’s defence many times, but they held steady to finish the game in their favour to be ranked 13th in the 14-nation World Cup.

Sri Lanka was ranked 14th in the last World Cup held in Barcelona, Spain in 2018, which saw the participation of 15 nations.

It was Sri Lanka over 40 team’s second win at the Masters’ World Cup history. They recorded the first win against Denmark 2-1 in Spain, when they played the debut World Cup.

The team, which was in the toughest group, lost to Germany by 11-0 in the first game, but fought back well against the mighty France to minimize the margin of loss by 5-1 goals. However, it saw four disastrous defeats from then onwards, losing to the hosts England by 12-0, Wales by 12-1, Ireland by 16-0, and South Africa by 15-0.

All the teams in the A group in which Sri Lanka’s over 40 team was included, won the game against equal ranked team in the B group. It partly explains Sri Lanka’s defeat in the round robin matches amid injuries for four players while both the coach and team manager were also forced to play due to visa rejections for at least three players. The team had only 16 14 players excluding the coach and manager instead of 18.

Over 35 Men’s and over 40 Women’s Sri Lanka teams failed to impress in this year’s World Cup.

The over 35 Men’s team was ranked last among the 10 nations participated in the World Cup after it lost the ranking game against Wales by 0-11. In the group games, they lost the games against Spain 9-0, England 15-0, Ghana 11-1, and South Africa 18-0. The only goal for the team against Ghana was scored by Rasiah Sathya.

The over 35 men’s team also comprised only 15 players instead of full 18 players.

Sri Lanka’s women’s team, led by Manoji Pradeepika Koralage, competed in over 40-category and had a similar experience suffering a massive 22-0 defeat at the hands of England.

The women’ team also lacked key players due to visa rejections. They lost the first game against Ghana 5-0 followed by losses to USA 9-0, Germany by 15-0, Scotland 11-0 and England 22-0. They also lost their ranking game against Spain 13-0.

The hosts England won all age category finals, while Ireland (0ver 35 women), South Africa (Over 35 men), Argentina (Over 45 women), and Australia (Over 45 men) became the runners up in the 10-day tournament which saw the participation of a total of 19 countries in different age categories.