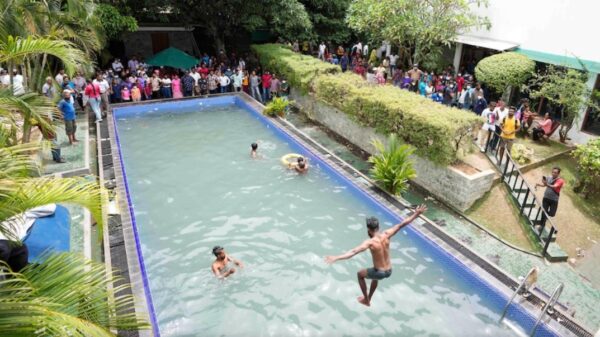 With giant white pillars, a bright blue pool, fully stocked gym, and a garage full of high-end cars, the President of Sri Lanka’s house is the height of luxury and opulence.

It was once a fortified place, representing a level of wealth inaccessible to ordinary Sri Lankans who haven’t been able to get basics like food and fuel for months during a crippling economic crisis.

Now, the residence has been extraordinarily taken over by regular people who are refusing to leave until they see “systemic change” and the President’s resignation.

Thousands stormed the property on Saturday and for the first time, President Gotabaya Rajapaksa swapped places with his people.

Sri Lankans who have gone without power for hours every day watched cricket on his flat-screen TVs.

Men dressed in black lay on their stomachs on the president’s bed and watch the cricket on a nearby TV. After months of food shortages, and with Colombo expected to run out completely by September, they ate his snacks and made curries in the kitchen.

Those who waited for hours in queues for fuel, cooking gas, and food every day for the last few months took selfies lying down on the President’s beds and sofas. Sri Lankans ate food from the kitchen, watched cricket on the President’s big screen television and even tried out his gym equipment. (Reuters: Dinuka Liyanawatte)

“Walking inside his house felt really surreal, it was very overwhelming to see the extent of luxury that they enjoy while people were dying in [fuel] queues, starving having one meal every other day of plain rice and curry,” protester Jeana De Zoysa told the ABC.

“We didn’t even get time to explore the whole house because it’s so big … I didn’t know what to think while I was in there.

“But we still had quite a bit of fear that the army was going to run in there.” N A Ajith is one of the security guards at the President’s house. He said because of the fuel shortage, he couldn’t get a bus into work to protect the property on Saturday when it was stormed.

“I was meant to come into work and a big problem happened. I couldn’t get a bus to work so I tried to walk in,” he said.

“The public should safeguard government property, but the government needs to make fuel available, sort out children’s schooling.

“I’m a security guard at the President’s residence and I hope my job will be secure because I’m the father of two children and struggling.”

“Hopefully, in 10 years, we can probably become a tougher country if you do the necessary changes.”

Sri Lankans have been suffering for months with soaring inflation and non-existent foreign reserves driving supplies of food, medication, and fuel down to critical levels.

There are constant power outages and as conditions get worse without any solid solution on the horizon, people have been protesting for months.

The protesters have also been calling for systemic changes to take “authoritarian power” away from the president’s position.

Legal experts say the only way those executive powers can be shed is through a referendum.

“If you want to really take out the executive presidency, you will need to have it not only pass through to those which are to Parliament, but also moved to the people at a referendum,” Saliya Peiris, from Sri Lanka’s Bar Association, said.

“If you are removing the entirety of the executive presidency, you need to go to the people at a referendum.”

While politicians argue about how to solve the parliamentary crisis, the day-to-day lives of Sri Lankans aren’t going to improve unless the country can secure a significant foreign bailout.