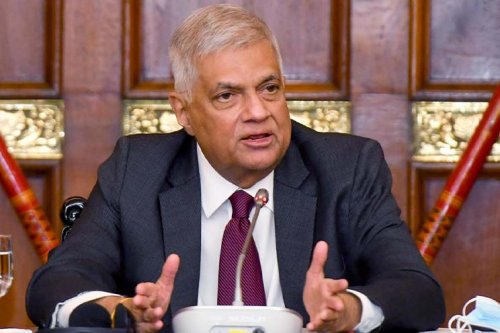 • No one should leave the country. The real skill is to contribute to the recovery of the country from the crisis.
• Will quickly arrange the economic system suitable for the country that fulfills the expectations of the youth.

Sri Lanka President Ranil Wickramasinghe said that his aim is to strengthen the country’s economy and prepare the background to move forward with the developed countries of the world.

Emphasizing that the country will be definitely moved towards economic prosperity, the President said no one should leave the motherland.

The President said creating one’s own world in one’s own country is the responsibility of the youth and it’s their true talent and added that the youth have the opportunity to contribute to the program of building a prosperous economy by 2025.

Pointing out that Sri Lanka was second only to Japan in Asia earlier, but today the country’s economy has declined rapidly, the President said it is necessary to decide whether to stay here or move towards economic development through a new program.

President Ranil Wickramasinghe pointed out that the tendency of young people to leave the country has increased and the reason for this is that they are not happy with the existing political system.

Pointing out that the appropriate economic system for the country should be set up quickly while fulfilling the expectations of the youth, the President said that the interim budget brought in last August was able to bring the country’s collapsed economy to a certain level of stability, and that the journey of building a new economy based on that stability will begin with this year’s budget.

Responding to the inquiry on public expenditure management, President Ranil Wickramasinghe stated that the budget of this year has proposed to appoint new financial monitoring committees and to strengthen the existing committees in the Parliament. The President also mentioned that it has been proposed to establish a parliamentary budget office to support these activities.

Recalling that the economic collapse that occurred in the country did not happen all at once, and despite many debates in the Parliament, no one submitted a report on such an economic crisis to the Parliament, the President also expressed confidence that such situations will be avoided with the implementation of these committees.

Responding to the inquiry about the public service, the President stated that the unnecessary filling of the public service in the past administrations has caused the economic crisis the country is facing today.

The President pointed out that even though the country is moving towards economic development, by 2035 the number of people retiring from public service will be very high, so they will have to face a serious problem in providing pensions.

President Ranil Wickramasinghe emphasized to the youth that ragging in universities is not a right and steps will be taken to end the practice in a manner that protects the rights of students.

Responding to the question whether government-owned enterprises such as Sri Lanka Telecom and Hilton will be privatized, the President stated that the only option to recover Sri Lanka’s economy, which has collapsed due to the loss of currency and foreign reserves, is to privatize non-profitable government institutions and raise them, and then the rupee can also be strengthened.